How to clear the console?

Can any body please tell me what code is used for clear screen in Java?

What code is used in Java to clear the screen?

Since there are several answers here showing non-working code for Windows, here is a clarification:

This command does not work, for two reasons:

To solve this problem, we have to invoke the command line interpreter (cmd) and tell it to execute a command (/c cls) which allows invoking builtin commands. Further we have to directly connect its output channel to the Java process’ output channel, which works starting with Java 7, using inheritIO():

Now when the Java process is connected to a console, i.e. has been started from a command line without output redirection, it will clear the console.

You can use following code to clear command line console:

For further reading visit this

This is how I would handle it. This method will work for the Windows OS case and the Linux/Unix OS case (which means it also works for Mac OS X).

⚠️ Note that this method generally will not clear the console if you are running inside an IDE.

Create a method in your class like this: [as @Holger said here.]

This works for windows at least, I have not checked for Linux so far. If anyone checks it for Linux please let me know if it works (or not).

As an alternate method is to write this code in clrscr():

I will not recommend you to use this method.

Here is a sample code:

If you want a more system independent way of doing this, you can use the JLine library and ConsoleReader.clearScreen(). Prudent checking of whether JLine and ANSI is supported in the current environment is probably worth doing too.

When running this, if you type 'clear' at the prompt it will clear the screen. Make sure you run it from a proper terminal/console and not in Eclipse.

This will work fine in Linux environment

Runtime.getRuntime().exec(cls) did NOT work on my XP laptop. This did -

Hope this is useful

By combining all the given answers, this method should work on all environments:

This will work if you are doing this in Bluej or any other similar software.

Try this: only works on console, not in NetBeans integrated console.

You need to use control characters as backslash (\b) and carriage return (\r). It come disabled by default, but the Console view can interpret these controls. 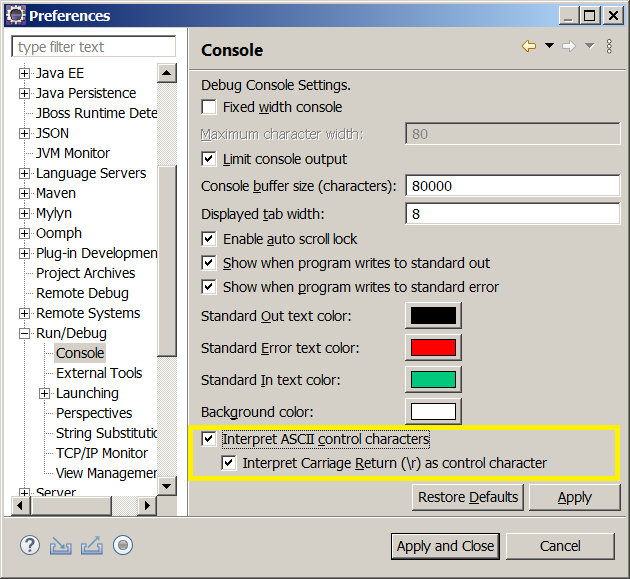 After these configurations, you can manage your console with control characters like:

\b - backspace (a step backward in the text or deletion of a single character).

You need to use JNI.

First of all use create a .dll using visual studio, that call system("cls"). After that use JNI to use this DDL.

I found this article that is nice:

Not the answer you're looking for? Browse other questions tagged java console or ask your own question.

4528
How do I read / convert an InputStream into a String in Java?
3464
When to use LinkedList over ArrayList in Java?
1973
Does Java support default parameter values?
1750
Why use getters and setters/accessors?
2176
What is a JavaBean exactly?
843
Node.js: printing to console without a trailing newline?
26459
Why is processing a sorted array faster than processing an unsorted array?
2925
Why is printing "B" dramatically slower than printing "#"?
1235
How to install Java 8 on Mac
1401
Why is executing Java code in comments with certain Unicode characters allowed?