I cleaned the whole project by deleting local directories like ~/.gradle, ~/.m2 ~./android and ~/workspace/project/.gradle and chosing File -> Invalidate Caches / Restart... in Android Studio. Now execution of the command ./gradlew leads to the following output:

Needless to say, I deleted too much, the question is how can it be repaired again? Do you have any ideas how to fix this?

In addition to @RaGe's answer may be the situation I faced where i had a global git ignore that was ignoring .jar files and so the gradle wrapper jar was never being committed. Thus I was getting that error on the Jenkins server after an attempted /var/lib/jenkins/my_project/gradlew build. I had to explicitly force an add of the jar and then commit:

Your gradle wrapper is missing, broken or corrupted.

--
What is gradle wrapper:

gradlew is the gradle wrapper executable - batch script on windows and shell script elsewhere. The wrapper script when invoked, downloads the defined gradle version and executes it. By distributing the wrapper with your project, anyone can work with it without needing to install Gradle beforehand. Even better, users of the build are guaranteed to use the version of Gradle that the build was designed to work with.

It used to be that you needed to add a wrapper task to your build.gradle to restore gradle wrapper and all its dependencies. For instance:

Newer versions of gradle do not require this. It is now a built-in task. Just run:

You can also supply additional flags to specify versions etc

When you run this task, a gradle wrapper script, and the required jar files are added to your source folders. Properties are stored in gradle/wrapper/gradle-wrapper.properties

--
Why was it missing in the first place?

OP seems to have deleted something that gradle wrapper depends on.

But a common reason is that a .gitignore entry prevents wrapper jars from being checked into git. Note that the .gitignore in effect may be in the source folder, or a global one in your user home folder or git global configuration. It is common to have a *.jar entry in .gitignore.

You can add an exception for gradlew's jar files in .gitignore

or force add the wrapper jar into git

What worked for me is to first run:

After successful build I was able to run

In my case it was a global .gitignore, as explained in @HankCa's answer.

Instead of forcefully adding the jar, which you'll need to remember to do in each Gradle project, I added an override to re-include the wrapper jar in my global .gitignore:

This is useful to me as I have many projects that use Gradle; Git will now remind me to include the wrapper jar.

This override will work so long as no directories above gradle-wrapper.jar (such as gradle and wrapper) are ignored -- git will not descend in to ignored directories for performance reasons.

In my case, I left out wrapper sub folder while copying gradle folder and got the same error.

make sure you have the correct folder structure if you copy wrapper from other location.

I followed the answers from above when i ran into this. And If you are having this issue than make sure to force push both jar and properties files. After these two, i stopped getting this issue.

You are probably missing gradle-wrapper.jar file under directory gradle/wrapper in your project.

You need to generate this file via this script in build.gradle file as below,

With gradle 2.4 (or higher) you can set up a wrapper without adding a dedicated task:

All the details can be found this link

In my case (using windows 10) gradlew.bat has the following lines of code in:

The APP_HOME variable is essentially gradles root folder for the project, so, if this gets messed up in some way you are going to get:

Error: Could not find or load main class org.gradle.wrapper.GradleWrapperMain

For me, this had been messed up because my project folder structure had an ampersand (&) in it. Eg C:\Test&Dev\MyProject

So, gradel was trying to find the gradle-wrapper.jar file in a root folder of C:\Test (stripping off everything after and including the '&')

I found this by adding the following line below the set APP_HOME=%DIRNAME% line above. Then ran the bat file to see the result.

There will be a few other 'special characters' that could break a path/directory.

I saw the same error but in my case it was a fresh Git installation without LFS installed. The repo in question was set up with LFS and the gradle-wrapper.jar was in LFS so it only contained a pointer to the LFS server. The solution was simple, just run:

And a fresh clone did the trick. I suppose git lfs pull or just a git pull could have helped as well but the person with the problem decided to do a fresh clone instead.

The problem statement is simple that its not able to locate the executable main class file.

If you are using gradle wrapper in your project, you should have strucutre as below

When you execute ./gradlew , it looks for the classpath and as per the code in gradlew or gradlew.bat, there is a line to add gradle-wrapper.jar to classpath

Now in my case there was an entry in the .gitignore as *.jar which excluded the gradle-wrapper.jar as well when the first commit was made.

So, to bring back the file, you have to execute below task

Once you execute the task, the gradle-wrapper-4.8.jar will be downloaded and dropped in the gradle/wrapper folder (as explained in above tree structure). Rename the file to gradle-wrapper.jar

However, as *.jar was excluded in the .gitignore file, I still cannot checkin it to store in github.

So add the below line in the .gitignore file to exclude gradle-wrapper.jar from ignored jars list due to *.jar.

that's work for me.

If you are using MacOS and the ./gradle/wrapper/gradle-wrapper.jar file already exists but it still throws the same error, it might be due to MacOS java permissions on the Documents folder.

Go to System Preferences -> Security and Privacy -> Privacy Tab -> Files and Folders -> Java, and check the "Documents folder" checkbox (or any other that might appear where you are holding your apps).

I fought with this thing for hours so I hope it's useful for someone.

I fixed this problem with next fix (maybe it will help someone):

Just check if the parent folders of your project folder have names with spaces or other forbidden characters. If yes - remove it.

I just had this in the OS X and solved as below:

Now, you can run the build command,

@HankCa solved the problem in my case as well. I decided to change my dangerous **/*.jar ignores to self-explanatory ones like src/**/lib/*.jar to avoid such problems in the future. Ignores starting with **/* are a bit too hazardous, at least to me. And it's always a good idea to get the idea behind a .gitignore row just by looking at it.

In my case gradle-wrapper.jar got corrupted after replacing a bunch of files. Reverting to original one resolved the problem.

In my case , I had removed gradlew and gradle folders from project. Reran clean build tasks through "Run Gradle Task" from Gradle Projects window in intellij 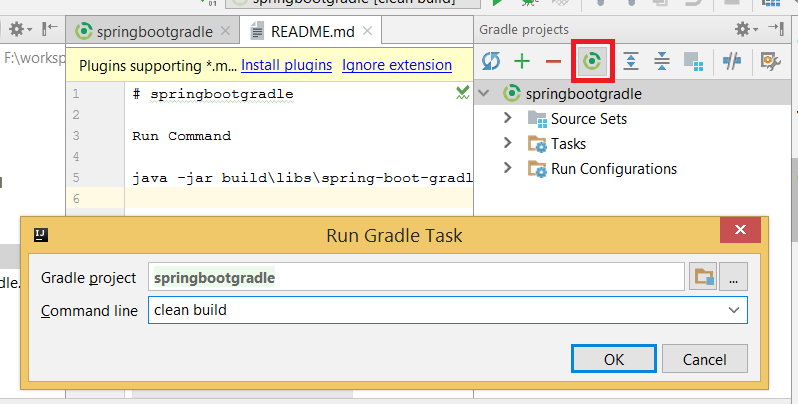 I have got this error because my app was in a folder that have an Arabic name and I solve it with just changing the Arabic folder name to an English one and it works fine.

So make sure that all the path of your app is written in English.

For Gradle version 5+, this command solved my issue :

I uninstalled gradle and reinstalled it and then created a new wrapper.

Our problem was that the gradle-wrapper.jar file kept getting corrupted by git.

We had to add a .gitattributes file with the line:

Then remove the jar from git and add it again. Weirdly enough that was only required for one of our repos but not the others.

then rebuild i hope you will be find working well.

It also might happen that you lost execution rights on the gradle folder, so

will help to fix the problem.

You can also use the following link to download the gradle wrapper file if needed.

219
Android Studio suddenly cannot resolve symbols
2
android studio 0.5.2: could not resolve com.android.tools.build:gradle:0.9.+
81
How to fix Android Studio getting stuck executing Gradle tasks?
4
Could not find property 'outputFile' on com.android.build.gradle.internal.api.ApplicationVariantImpl even by following the previous answers
122
Gradle error: Write access is allowed from event dispatch thread only in Android Studio
17
Gradle build lintVitalRelease NullPointerException
137
Android Studio shows wrong file contents
8
Could not get unknown property 'assemble'
3
Could not find matching constructor for: org.gradle.api.internal.artifacts.ivyservice.ivyresolve.VersionInfo(java.lang.String)
0
Error: Could not find or load main class org.gradle.wrapper.GradleWrapperMain and no gradle-wrapper.jar exists