Is there a quick way to "git diff" from the point or branch origin?

I have looked at various SO answers on using git diff and git revisions (HEAD, ORIG_HEAD, FETCH_HEAD, etc.) and I still haven't found an easy way to list the changes have been made since the beginning of the local branch, or since last rebase.

By easy I mean without having to look up and paste commit SHA or having to count how many commits I want to look back.

git diff origin/master is close, but it refers to remote which may have diverged since I checked out new branch from it.

I would expect something like git diff BASE_HEAD to be available.

...unless there's already a way to do that. Does anyone have the answer?

You can find the branch point using git merge-base. Consider master the mainline and dev the branch whose history you are interested in. To find the point at which dev was branched from master, run:

We can now diff dev against this basis:

If dev is the current branch this simplifies to:

With two dots, or with HEAD omitted, it will show diffs from changes on both sides.

With three dots, it will only show diffs from changes on your side.

Edit: for people with slightly different needs, you might be interested in git merge-base (note that it has plenty more options than the other answer uses).

You can diff the current branch from the branch start point using:

Where (start point) is a branch name, a commit-id, or a tag.

Eg if you're working on a feature branch branched from develop, you can use:

for all changes on the current branch since the branch point.

This was already mentioned in a comment, but I think it deserves answer status. I don't know what it will do since last rebase.

For diffs, you want the three-dot notation. If your branch is called dev and it branched from master:

The revision syntax r1..r2 (with two dots) means "everything reachable from r2 (inclusive) but not reachable from r1 (inclusive)". The normal way to use this is to think of r1 and r2 as specifying a range in a sequence of commits (r1 exclusive, r2 inclusive), so if you have 10 revisions, 3..7 will show you changes 4, 5, 6, and 7. It's {1, 2, 3, 4, 5, 6, 7} minus {1, 2, 3}. But r1 doesn't necessarily have to be an ancestor of r2. Think of it more like a set operation where r1 represents the entire ancestry from r1 backwards, and r2 represents the entire ancestry from r2 backwards, and you're subtracting the first set from the second set.

To diff against the remote master branch:

When git diff is given a symmetric difference A...B, it chooses some merge base from the two specified commits (as documented).

This fails, however, if there is no merge base: instead, you see the differences between A and B, which is certainly not what is expected.

Moreover, if additional revisions are specified on the command line ("git diff A...B C"), the results get a bit weird:

To avoid all this, add a routine to catch the range cases and verify that that the arguments make sense.

As a side effect, produce a warning showing which merge base is being used when there are multiple choices; die if there is no merge base.

This form is to view the results of a merge commit.

The first listed must be the merge itself; the remaining two or more commits should be its parents.
A convenient way to produce the desired set of revisions is to use the {caret}@ suffix.
For instance, if master names a merge commit, git diff master master^@ gives the same combined diff as git show master.

If you use a newer git version, you can simply use

Which delivers (for me) identical results to currently highest voted answer of:

The command was introduced in Git Version 2.30 as:

"git diff A...B" learned "git diff --merge-base A B", which is a longer short-hand to say the same thing.

So basically it another way of gettings the same result as the currently accepted answer.

I wrote an alias in my .gitconfig to solve this task:

In Visual Studio 2017 there is a comfortable way to show diffs: 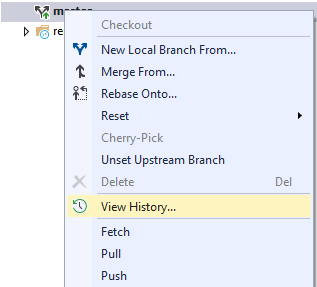 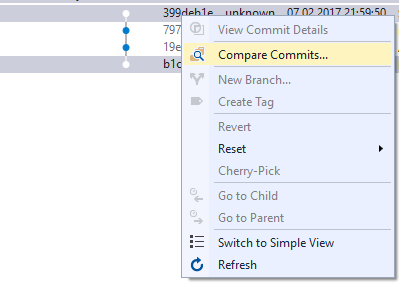 You get a nice diff overview and you can open the files in compare mode.

Not the answer you're looking for? Browse other questions tagged git git-diff or ask your own question.

1
Git diff for branches’ starting point
553
Finding a branch point with Git?
10
How to get commit where merged branch forked from
0
Make git diff show the same result as Github, but from a long time ago
0
View diff of all changes made in entire branch since its creation
1
How to know the origin of a fork in git?

7725
How do I remove local (untracked) files from the current Git working tree?
3937
How do I delete a commit from a branch?
1420
How can I revert multiple Git commits?
6055
Move the most recent commit(s) to a new branch with Git
1952
Make the current Git branch a master branch
5011
How to determine the URL that a local Git repository was originally cloned from
2523
How do I safely merge a Git branch into master?
1707
How can I reconcile detached HEAD with master/origin?
3535
How do I get the current branch name in Git?
1209
Git push rejected after feature branch rebase