How can I make XSLT work in chrome?

I have an XML document here that is served with a corresponding XSL file. The transformation is left to be executed client-side, without JavaScript.

I know that it is possible to do client-side XSL in Chrome, as I have seen examples of it, but I am yet to be able to replicate this success myself

The other answer below by Eric is wrong. The namespace declaration he mentioned had nothing to do with the problem.

Chrome foils the above scenario by putting restrictions on local files opened using Chrome. To overcome these restrictions, we've got two solutions:

At the time of writing, there was a bug in chrome which required an xmlns attribute in order to trigger rendering:

This was the problem I was running into when serving the xml file from a server.

If unlike me, you are viewing the xml file from a file:/// url, then the solutions mentioning --allow-file-access-from-files are the ones you want

The problem based on Chrome is not about the xml namespace which is xmlns="http://www.w3.org/1999/xhtml". Without the namesspace attribute, it won't work with IE either.

Because of the security restriction, you have to add the --allow-file-access-from-files flag when you start the chrome. I think linux/*nix users can do that easily via the terminal but for windows users, you have to open the properties of the Chrome shortcut and add it in the target destination as below; 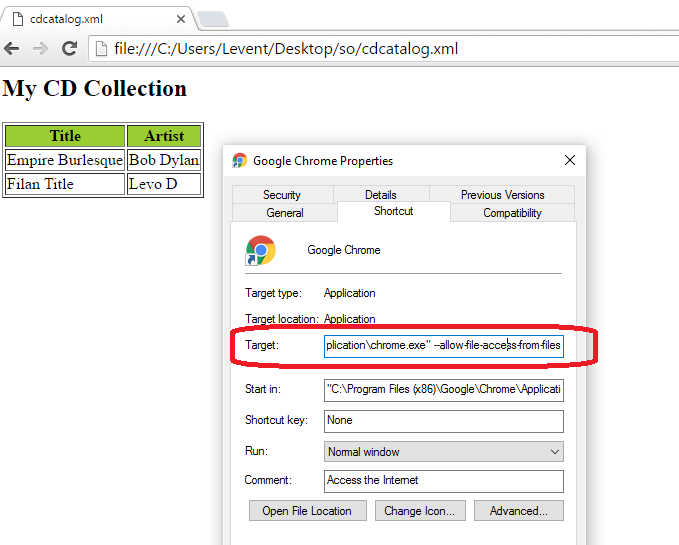 Here is a sample full path with the flags which I use on my machine;

I hope showing this step-by-step will help windows users for the problem, this is why I've added this post.

Well it does not work if the XML file (starting by the standard PI:

for referencing the XSL stylesheet) is served as "application/xml". In that case, Chrome will still download the referenced XSL stylesheet, but nothing will be rendered, as it will silently change the document types from "application/xml" into "Document" (!??) and "text/xsl" into "Stylesheet" (!??), and then will attempt to render the XML document as if it was an HTML(5) document, without running first its XSLT processor. And Nothing at all will be displayed in the screen (whose content will continue to show the previous page from which the XML page was referenced, and will continue spinning the icon, as if the document was never completely loaded.

You can perfectly use the Chrome console, that shows that all resources are loaded, but they are incorrectly interpreted.

So yes, Chrome currently only render XML files (with its optional leading XSL stylesheet declaration), only if it is served as "text/xml", but not as "application/xml" as it should for client-side rendered XML with an XSL declaration.

For XML files served as "text/xml" or "application/xml" and that do not contain an XSL stylesheet declaration, Chrome should still use a default stylesheet to render it as a DOM tree, or at least as its text source. But it does not, and here again it attempts to render it as if it was HTML, and bugs immediately on many scripts (including a default internal one) that attempt to access to "document.body" for handling onLoad events and inject some javascript handler in it.

An example of site that does not work as expected (the Common Lisp documentation) in Chrome, but works in IE which supports client-side XSLT:

This index page above is displayed correctly, but all links will drive to XML documents with a basic XSL declaration to an existing XSL stylesheet document, and you can wait indefinitely, thinking that the chapters have problems to be downloaded. All you can do to read the docuemntation is to open the console and read the source code in the Resources tab.

This site is built with XML/XSLT client-side. It works on IE6-7-8, FF, O, Safari and Chrome. Are you sending HTTP headers correctly? Are you respecting the same-origin policy?

As close as I can tell, Chrome is looking for the header

Then it works --- other iterations have failed.

Make sure your web server is providing this. It also explains why it fails for file://URI xml files.

What Eric says is correct.

In the xsl, for the xsl:stylesheet tag have the following attributes

It works fine in chrome.

I started testing this and ran into the local file / Chrome security issue. A very simple workaround is put the XML and XSL file in, say, Dropbox public folder and get links to both files. Put the link to the XSL transform in the XML head. Use the XML link in Chrome AND IT WORKS!

After 8 years the situation is changed a bit.

I'm unable to open a new session of Google Chrome without other parameters and allow 'file:' schema.

On macOS I do:

Without this arguments I'm unable to test the XSL stylesheet in local.

I tried putting the file in the wwwroot. So when accessing the page in Chrome, this is the address localhost/yourpage.xml.

Not the answer you're looking for? Browse other questions tagged xslt google-chrome or ask your own question.

4
Why does this XML file not display anything?
1
XPath query not working in browser XSLT
323
What is a faster alternative to Python's http.server (or SimpleHTTPServer)?
138
How to launch html using Chrome at "--allow-file-access-from-files" mode?
24
Which browser can show XML data transformed by XSLT?
21
XSL not working in Google Chrome
20
How can I <iframe> Gmail?
31
What browsers support XSLT 2.0?
8
Firefox and remote XSL stylesheets
9
Why can't I get XSLT to work in chrome?
See more linked questions

1971
Disable same origin policy in Chrome
97
Can Chrome be made to perform an XSL transform on a local file?
933
See :hover state in Chrome Developer Tools
21
XSL not working in Google Chrome
1349
How to manually send HTTP POST requests from Firefox or Chrome browser
1694
Disabling Chrome cache for website development
1601
Getting Chrome to accept self-signed localhost certificate
1220
How do I get ASP.NET Web API to return JSON instead of XML using Chrome?
926
Remove blue border from css custom-styled button in Chrome