I have a Tab Bar Controller which is the Initial View Controller, which also has a PFLoginViewController that pups up if a user isn't logged in. The Login/Signup flow works fine.

When a user clicks a photo in IntroVC, a Show segue is triggered (via prepareForSegue) that shows a 3rd screen (UIView) which is technically not a tab. I will refer to this as the SelectVC from now on.

NOTE: All of these screens are also Embed(ded) In a Navigation Controller.

The SelectVC displays a photo, and there is a UIButton that the user can press which triggers a Show segue and Unwind segue, to push the image into the FeedVC. The reason I created an Unwind segue is because without it, the image would push into the FeedVC (2nd tab) but the first tab would still be highlighted.

I fixed this with the Unwind segue, but I noticed I'm having a problem where after a selection, when I press the 1st tab (Intro VC) the Nav bar has a Back button, and the more times I use the SelectVC button to push images, the more times I have to press Back in the IntroVC. I'm very confused about how to fix this. It's apparent that I'm not hooking up the flow properly and it seems that the IntroVC is being generated multiple times?

I get the following message in the console when I go through the segues in Simulator:

I know this is weirdly structured, and if I'm missing information that is needed to fully understand - please let me know and I'll edit accordingly.

Segue to another tab with data

This solution uses an unwind segue to switch to a new tab and send it data. 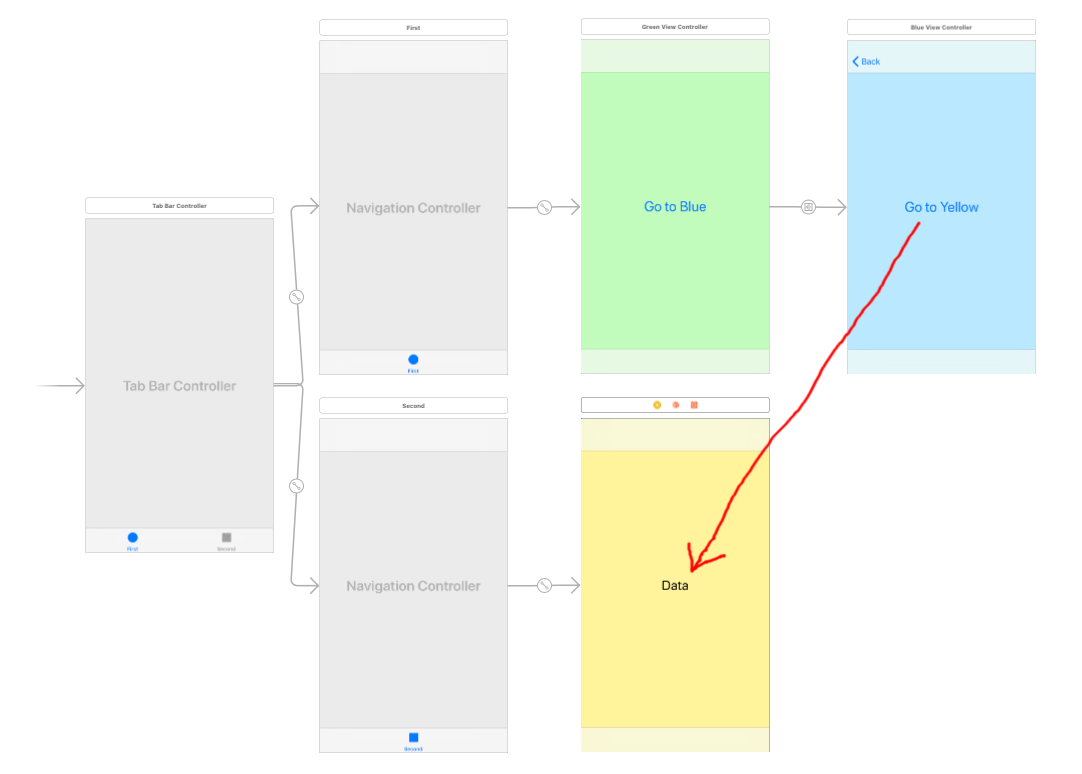 Goal: Go from Blue to Yellow and pass data at the same time.

Control drag from the button to the Exit icon on the top of the source View Controller. Since we have already added the unwind segue code to the destination View Controller, it will show up as an option. Choose it. 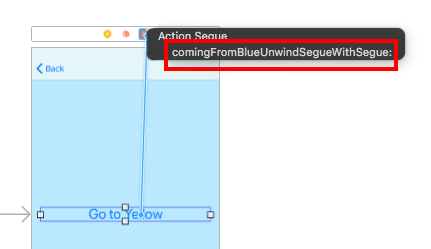 I think your problem comes in this line (prepareForSegue method)

since you are trying to pop the view controller from the stack before presenting SelectVC. This may well be the cause for a possible corrupted navigation bar (what if you pop the root view controller?). You can try the following method instead:

I'm not sure I understand the reason you call self.navigationController?.popViewControllerAnimated(true) inside prepareForSegue: of IntroVC.swift: this way you "pop" the ViewController out of the stack even before presenting it (meaning that you actually attempt to pop IntroVC out of the stack, not SelectVC).

First thing I'd try, comment that line in prepareForSegue: and see what happens.

Let me know if this works!

Have a nice day,

Not the answer you're looking for? Browse other questions tagged ios uitabbarcontroller segue uistoryboardsegue unwind-segue or ask your own question.