Why are Objects not Iterable in JavaScript?

Why are objects not iterable by default?

I see questions all the time related to iterating objects, the common solution being to iterate over an object's properties and accessing the values within an object that way. This seems so common that it makes me wonder why objects themselves aren't iterable.

Statements like the ES6 for...of would be nice to use for objects by default. Because these features are only available for special "iterable objects" which don't include {} objects, we have to go through hoops to make this work for objects we want to use it for.

The for...of statement creates a loop Iterating over iterable objects (including Array, Map, Set, arguments object and so on)...

The above properly logs data in the order I expect it to when I run the code in Firefox (which supports ES6): 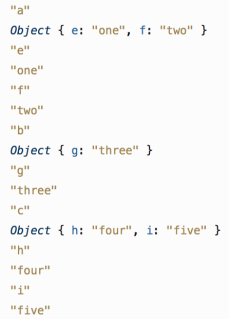 By default, {} objects are not iterable, but why? Would the disadvantages outweigh the potential benefits of objects being iterable? What are the issues associated with this?

In addition, because {} objects are different from "Array-like" collections and "iterable objects" such as NodeList, HtmlCollection, and arguments, they can't be converted into Arrays.

or be used with Array methods:

Besides the questions I have above, I would love to see a working example on how to make {} objects into iterables, especially from those who have mentioned the [Symbol.iterator]. This should allow these new {} "iterable objects" to use statements like for...of. Also, I wonder if making objects iterable allow them to be converted into Arrays.

I tried the below code, but I get a TypeError: can't convert undefined to object.

I'll give this a try. Note that I'm not affiliated with ECMA and have no visibility into their decision-making process, so I cannot definitively say why they have or have not done anything. However, I'll state my assumptions and take my best shot.

1. Why add a for...of construct in the first place?

JavaScript already includes a for...in construct that can be used to iterate the properties of an object. However, it's not really a forEach loop, as it enumerates all of the properties on an object and tends to only work predictably in simple cases.

It breaks down in more complex cases (including with arrays, where its use tends to be either discouraged or thoroughly obfuscated by the safeguards needed to for use for...in with an array correctly). You can work around that by using hasOwnProperty (among other things), but that's a bit clunky and inelegant.

So therefore my assumption is that the for...of construct is being added to address the deficiencies associated with the for...in construct, and provide greater utility and flexibility when iterating things. People tend to treat for...in as a forEach loop that can be generally applied to any collection and produce sane results in any possible context, but that's not what happens. The for...of loop fixes that.

I also assume that it's important for existing ES5 code to run under ES6 and produce the same result as it did under ES5, so breaking changes cannot be made, for instance, to the behavior of the for...in construct.

The reference documentation is useful for this part. Specifically, an object is considered iterable if it defines the Symbol.iterator property.

The property-definition should be a function that returns the items in the collection, one, by, one, and sets a flag indicating whether or not there are more items to fetch. Predefined implementations are provided for some object-types, and it's relatively clear that using for...of simply delegates to the iterator function.

This approach is useful, as it makes it very straightforward to provide your own iterators. I might say the approach could have presented practical issues due to its reliance upon defining a property where previously there was none, except from what I can tell that's not the case as the new property is essentially ignored unless you deliberately go looking for it (i.e. it will not present in for...in loops as a key, etc.). So that's not the case.

Practical non-issues aside, it may have been considered conceptually controversial to start all objects off with a new pre-defined property, or to implicitly say that "every object is a collection".

3. Why are objects not iterable using for...of by default?

My guess is that this is a combination of:

There's even an example provided for #3 in the reference documentation:

Given that objects can easily be made iterable, that they can already be iterated using for...in, and that there's likely not clear agreement on what a default object iterator should do (if what it does is meant to be somehow different from what for...in does), it seems reasonable enough that objects were not made iterable by default.

Note that your example code can be rewritten using for...in:

...or you can also make your object iterable in the way you want by doing something like the following (or you can make all objects iterable by assigning to Object.prototype[Symbol.iterator] instead):

You can play with that here (in Chrome, at lease): http://jsfiddle.net/rncr3ppz/5/

And in response to your updated question, yes, it is possible to convert an iterable to an array, using the spread operator in ES6.

However, this doesn't seem to be working in Chrome yet, or at least I cannot get it to work in my jsFiddle. In theory it should be as simple as:

I guess the question should be "why is there no built-in object iteration?

Adding iterability to objects themselves could conceivably have unintended consequences, and no, there is no way to guarantee order, but writing an iterator is as simple as

Objects don't implement the iteration protocols in Javascript for very good reasons. There are two levels at which object properties can be iterated over in JavaScript:

When you iterate over an object at the program level you examine a portion of the structure of your program. It is a reflective operation. Let's illustrate this statement with an array type, which is usually iterated over at the data level:

We just examined the program level of xs. Since arrays store data sequences, we are regularly interested in the data level only. for..in evidently makes no sense in connection with arrays and other "data-oriented" structures in most cases. That is the reason why ES2015 has introduced for..of and the iterable protocol.

Does that mean that we can simply distinguish the data from the program level by distinguishing functions from primitive types? No, because functions can also be data in Javascript:

Besides primitive values can represent the program level as well:

That means that we can't distinguish the program and data level by merely checking types.

It is important to understand that the implementation of the iteration protocols for plain old Javascript objects would rely on the data level. But as we've just seen, a reliable distinction between data and program level iteration is not possible.

There is no meaningful way to implement the iteration protocols for objects, because not every object is a collection.

If object properties were iterable by default, program and data level were mixed-up. Since every composite type in Javascript is based on plain objects this would apply for Array and Map as well.

for..in, Object.keys, Reflect.ownKeys etc. can be used for both reflection and data iteration, a clear distinction is regularly not possible. If you're not careful, you end up quickly with meta programming and weird dependencies. The Map abstract data type effectively ends the conflating of program and data level. I believe Map is the most significant achievement in ES2015, even if Promises are much more exciting.

You can easily make all objects iterable globally:

This is the latest approach (which works in chrome canary)

Yes entries is now a method thats part of Object :)

After looking more into it, it seems you could do the following

so you can now do this

Back to your original example, if you wanted to use the above prototype method it would like like this

I was also bothered with this question.

Then I came up with an idea of using Object.entries({...}), it returns an Array which is an Iterable.

Also, Dr. Axel Rauschmayer posted an excellent answer on this. See Why plain objects are NOT iterable

Technically, this is not an answer to the question why? but I have adapted Jack Slocum’s answer above in light of BT’s comments to something which can be used to make an Object iterable.

Not quite as convenient as it should have been, but it’s workable, especially if you have multiple objects:

And, because every one is entitled to an opinion, I can’t see why Objects are not already iterable either. If you can polyfill them as above, or use for … in then I can’t see a simple argument.

One possible suggestion is that what is iterable is a type of object, so it is possible that iterable has been limited to a subset of objects just in case some other objects explode in the attempt.

Not the answer you're looking for? Browse other questions tagged javascript arrays iterator ecmascript-6 ecmascript-5 or ask your own question.

2
Invalid attempt to spread non-iterable instance on an object
4
Can the JavaScript ES6 Spread operator be used with array-like objects?
0
Why can't I iterate through JSON data in Angular (typescript)?
4712
For-each over an array in JavaScript
1089
map function for objects (instead of arrays)
462
JavaScript for…in vs for
83
Maps vs Objects in ES6, When to use?
1
Order of elements in React.addons.createFragment object
1
Why can't I iterate the properties of my ES6 Map?
3
Better way to call `Array.prototype.some()` on es6 Map
See more linked questions