While reading some papers about the Turing completeness of recurrent neural nets (for example: Turing computability with neural nets, Hava T. Siegelmann and Eduardo D. Sontag, 1991), I got the feeling that the proof which was given there was not really that practical. For example the referenced paper needs a neural network which neuron activity must be of infinity exactness (to reliable represent any rational number). Other proofs need a neural network of infinite size. Clearly, that is not really that practical.

But I started to wonder now if it does make sense at all to ask for Turing completeness. By the strict definition, no computer system nowadays is Turing complete because none of them will be able to simulate the infinite tape.

Interestingly, programming language specification leaves it most often open if they are turing complete or not. It all boils down to the question if they will always be able to allocate more memory and if the function call stack size is infinite. Most specification don't really specify this. Of course all available implementations are limited here, so all practical implementations of programming languages are not Turing complete.

So, what you can say is that all computer systems are just equally powerful as finite state machines and not more.

And that brings me to the question: How useful is the term Turing complete at all?

And back to neural nets: For any practical implementation of a neural net (including our own brain), they will not be able to represent an infinite number of states, i.e. by the strict definition of Turing completeness, they are not Turing complete. So does the question if neural nets are Turing complete make sense at all?

Some other questions which are more about what I really want to know:

The point of stating that a mathematical model is Turing Complete is to reveal the capability of the model to perform any calculation, given a sufficient amount of resources (i.e. infinite), not to show whether a specific implementation of a model does have those resources. Non-Turing complete models would not be able to handle a specific set of calculations, even with enough resources, something that reveals a difference in the way the two models operate, even when they have limited resources. Of course, to prove this property, you have to do have to assume that the models are able to use an infinite amount of resources, but this property of a model is relevant even when resources are limited.

Regular feedforward neural networks are not turing complete. They are, in effect, equivalent to a single complicated mathematical function that may do quite a lot of calculations but doesn't have any ability perform looping or other control flow operations.

However, if you wire up a neural network with some way to access a stateful environment then it can be be made into a turing complete machine.

As a most trivial example, you could recreate a classic-style Turing machine where:

Note: The idea of running a feedforward net repeatedly with some form of state feedback is essentially equivalent to a recurrent neural network. So you can think of a recurrent neural network plus the logic that runs it repeatedly as being Turing complete. You need the extra logic (over and above the network itself) to ensure Turing completeness because it is necessary to handle things like termination, repetition and IO.

It is of course possible to create one that is not Turing complete.

Turing-completeness of recurrent neural networks could mean: the (finite) transition tables of each and every Turing machine (with a finite-state head and an infinite tape) can be modelled by a finite recurrent neural network (finitely many neurons with finitely many states, especially only two states). The transition tables define three functions:

This is how a recurrent neural network may perform this task (just a very raw sketch): 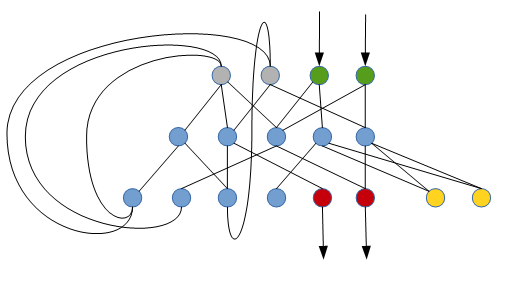 The claim is, that for each and every Turing machine there is such a recurrent neural network.

I wonder if there is a systematic way to construct such a network from given transition tables.

After many years, let me give an answer to this question myself.

On the computational power of neural nets

An often cited paper is On the computational power of neural nets, Siegelmann & Sonntag, 1992, which states that RNNs are Turing complete. This paper assumes that we have rational numbers without limits in the nominator/denominator, i.e. the infinite memory is encoded as rational numbers, or floating point numbers of infinite precision. See also here. Usually we do not model a NN in a way that is operates with rational numbers (without limit). When we restrict ourselves to (R)NNs with finite precision weights and activations, the proof in the paper falls appart, and does not apply anymore. Thus, this paper is not so relevant.

There is a more recent paper, On the Practical Computational Power of Finite Precision RNNs for Language Recognition, Weiss et al, 2018, which exactly addresses this.

It is well known that most standard NNs are universal approximators. This states, that given any function (nonconstant, bounded, and continuous), and given some allowed threshold, you can construct a NN which approximates this function within the allowed threshold. This is about finite dimensional vector spaces. When we speak about computability, we speak about sequences, thus we have an infinite dimensional vector space. Thus this property is not so relevant.

Thus, to state it explicitly: Without external memory, the standard RNN, and also LSTM is not Turing complete. There is also no straight-forward way how you could define a concept of a RNN, where you could add memory on demand. The memory of a RNN are the most recent hidden activations. Adding more memory means to change the NN, i.e. adding new neurons, thus adding the internal workings of it. This is like changing the program itself.

There is the Neural Turing machine (NTM) and a few similar models, which have some sort of external memory. Here it is straight-forward to think about a concept of a NTM where you would add memory on demand. Thus we can say that the concept of a NTM is Turing complete.

There are some details like the type of attentions used in the heads, which needs some adaptation. There is a follow up on the model, the Differentiable neural computer (DNC) which explicitly addresses this, and also has some explicit mechanism to add memory.

We spoke mostly about the theoretic computation power. A very different question is whether the NN can learn such a function. I.e. whether training (gradient search) leads to a NN which has learned a computable function.

There is one aspect of the memory in a human brain which is a bit different than in a standard RNN: It can generalize to a high degree, and the addressing mechanism to access certain activations is different. Also, it has some kind of adaptive weights (which however also only can store finite information). So, considering this, it's actually already more similar to a NTM than just a RNN. There are many different kinds of memory in the human brain. Some of it is just as static as a RNN (like the current activations) but other types allow for associative memory like a NTM. And thus the human brain is also similar to a PC, which also has finite memory, whereas the concept of a PC has infinite memory.

To partially address your second question:

I think the concept of Turing completeness is not intended to tell us whether a particular computer can perform a particular task.

As neural networks don't have a language, it's a question of expressing an algorithm in terms of a neural network, rather than the capability of that network. So I don't know the answer to the last bit of your question!

I think an important point about the turing machine is that for any given input and program, the machine will only need a finite amount of tape, assuming it halts some time. That's why I would say the term "turing complete" is useful: You only need finite memory to run one specific turing complete program on some specific input (if the program halts). But if you have a non-turing-complete machine/language/technology, it won't be able to simulate certain algorithms, not matter how much memory you add.

It is almost always nice to know which class in the Chomsky hierarchy your system is. This is especially important in the more constricted classes, like regular languages / finite automata vs context-free languages. Also having the skill to recognize which class your the problem you are trying to solve is in is also important, otherwise one might try to do silly things like parsing HTML or XML with regular expressions only, which is impossible.

Having the knowlegde that your formalism or system is turing complete makes a statement that you can build whatever you want with it. It does not say anything about practicality, just the possibility or impossibility of solving problems. This is painfully true when considering turing tarpits, but there is also many turing complete systems which are specifically made for niche purposes that no one should ever dream of using for general purpose work in a production setting.

Basically it means that with programming language or architecture which are Turing complete
you can execute wide variety of algorithms... mostly -- any kind of them.

The answer is very simple. If you can emulate a NOR or a NAND gate with it, then it is Turing Complete, assuming that the rest is just a matter of combining things together.

2
what practical proofs are there about the Turing completeness of neural nets? what nns can execute code/algorithms?