rebase in progress. Cannot commit. How to proceed or stop (abort)?

I can't commit to origin.

I'm stuck. I don't know what to do? Does it really take this long to rebase? git rebase --continue doesn't do anything. I don't have anything in git status.. I'm just waiting for the rebase. What can I do?

UDATE: This is the output of: git rebase --continue

git add . has nothing.

Rebase doesn't happen in the background. "rebase in progress" means that you started a rebase, and the rebase got interrupted because of conflict. You have to resume the rebase (git rebase --continue) or abort it (git rebase --abort).

As the error message from git rebase --continue suggests, you asked git to apply a patch that results in an empty patch. Most likely, this means the patch was already applied and you want to drop it using git rebase --skip.

If git rebase --abort doesnt work and you still get

error: could not read '.git/rebase-apply/head-name': No such file or directory

I got stuck in 'rebase status', I got

but running git rebase --skip yielded error: could not read '.git/rebase-apply/head-name': No such file or directory.

Note: of course, do it only if you don't care about the rebase or if you're stuck on a previous rebase you don't want anymore.

Note: If you don't know what's going on and just want to go back to where the repo was, then just do:

You told your repository to rebase. It looks like you were on a commit (identified by SHA 9c168a5) and then did git rebase master or git pull --rebase master.

You are rebasing the branch master onto that commit. You can end the rebase via git rebase --abort. This would put back at the state that you were at before you started rebasing.

I setup my git to autorebase on a git checkout

Otherwise, it automatically merges when you switch between branches, which I think is the worst possible choice as the default.

However, this has a side effect, when I switch to a branch and then git cherry-pick <commit-id> I end up in this weird state every single time it has a conflict.

The second git commit . seems to come from the abort. I'll fix my answer if I find out that I should abort the rebase sooner.

The --force on the push is required if you skip other commits and both branches are not smooth (both are missing commits from the other).

Another option to ABORT / SKIP / CONTINUE from IDE 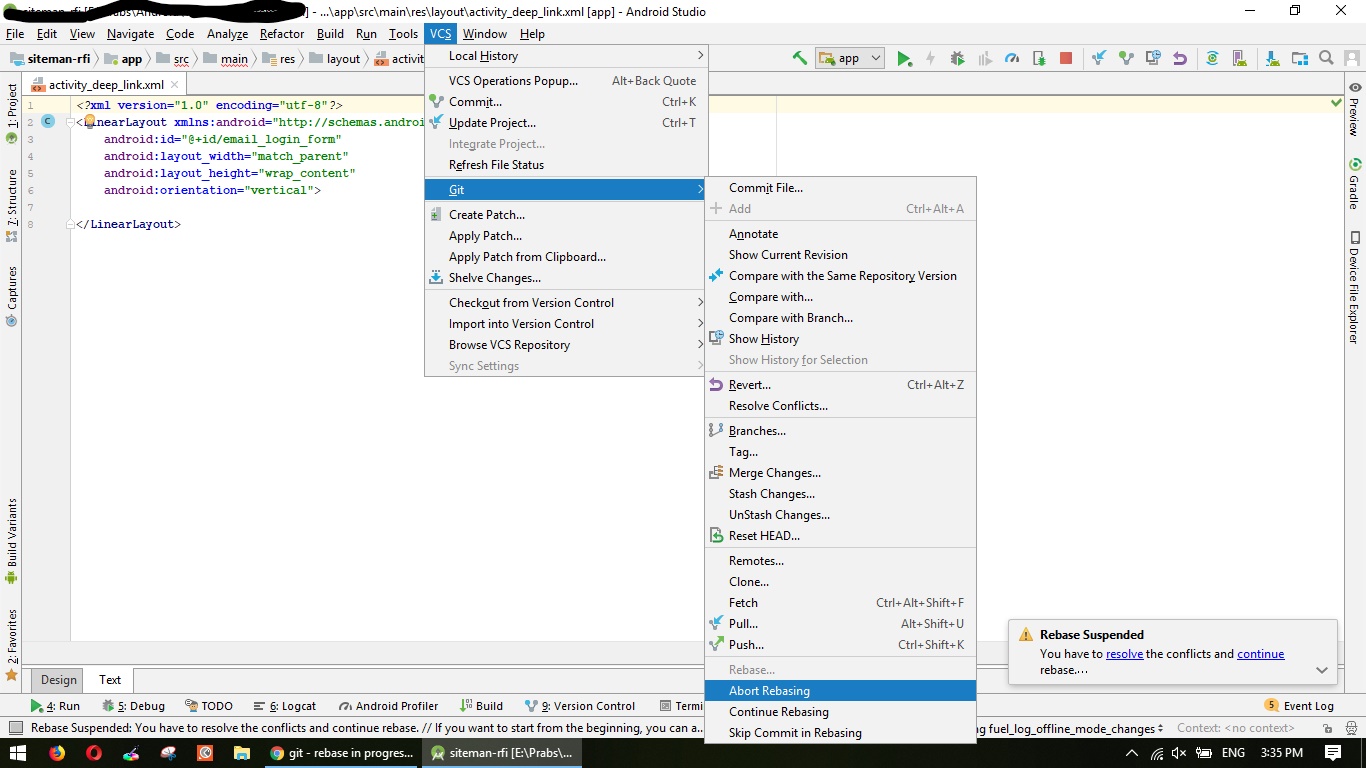 Mine was an error that popped up from BitBucket. Ran git am --skip fixed it.

I was facing the same issue, In my case when I try to rebase I got conflicts, and once I resolved all the conflicts and try to add a commit message but it show this error in my client editor (VS Code)

Sometimes in VS code still It showing rebase in progress, To solve that you need to fire this command rm -rf .git/REBASE_HEAD

2933
I ran into a merge conflict. How can I abort the merge?
7656
How to modify existing, unpushed commit messages?
10301
How do I undo 'git add' before commit?
3204
How do I list all of the files in a commit?
1018
Git workflow and rebase vs merge questions
2736
How to modify a specified commit?
2567
How to change the commit author for one specific commit?
7620
How do I revert a Git repository to a previous commit?
1553
How do I properly force a Git push?
1155
Git push rejected after feature branch rebase