How to git rebase a branch with the onto command?

I have noticed that the two blocks of following git commands have different behaviours and I don't understand why.

No problem if I do:

It doesn't work at all, nothing happens. I don't understand why the two behaviours are different.

PhpStorm GIT client uses the second syntax, and so seems to be completely broken, that's why I ask for this syntax issue.

The correct syntax to rebase B on top of A using git rebase --onto in your case is:

or rebase B on top of A starting from the commit that is the parent of B referenced with B^ or B~1.

If you're interested in the difference between git rebase <branch> and git rebase --onto <branch> read on.

git rebase <branch> is going to rebase the branch you currently have checked out, referenced by HEAD, on top of the latest commit that is reachable from <branch> but not from HEAD.
This is the most common case of rebasing and arguably the one that requires less planning up front.

The Precise: git rebase --onto with 2 arguments

git rebase --onto allows you to rebase starting from a specific commit. It grants you exact control over what is being rebased and where. This is for scenarios where you need to be precise.

For example, let's imagine that we need to rebase HEAD precisely on top of F starting from E. We're only interested in bringing F into our working branch while, at the same time, we don't want to keep D because it contains some incompatible changes.

In this case, we would say git rebase --onto F D. This means:

Rebase the commit reachable from HEAD whose parent is D on top of F.

Another scenario where this comes in handy is when you want to quickly remove some commits from the current branch without having to do an interactive rebase:

In this example, in order to remove C and E from the sequence you would say git rebase --onto B E, or rebase HEAD on top of B where the old parent was E.

The Surgeon: git rebase --onto with 3 arguments

git rebase --onto can go one step further in terms of precision. In fact, it allows you to rebase an arbitrary range of commits on top of another one.

In this case, we want to rebase the exact range E---H on top of F, ignoring where HEAD is currently pointing to. We can do that by saying git rebase --onto F D H, which means:

Rebase the range of commits whose parent is D up to H on top of F.

The syntax of git rebase --onto with a range of commits then becomes git rebase --onto <newparent> <oldparent> <until>. The trick here is remembering that the commit referenced by <until> is included in the range and will become the new HEAD after the rebase is complete.

This is all you need to know to understand --onto:

You're switching a parent on a commit, but you're not providing the sha of the commit, only the sha of it's current (old) parent.

Which is the same as (because --onto takes one argument):

Means rebase commits in range (D, H] on top of F. Notice the range is left-hand exclusive. It's exclusive because it's easier to specify 1st commit by typing e.g. branch to let git find the 1st diverged commit from branch i.e. D which leads to H.

Can be changed to single command:

What looks like error here is placement of B which means "move some commits which lead to branch B on top of B". The questions is what "some commits" are. If you add -i flag you will see it is single commit pointed by HEAD. The commit is skipped because it is already applied to --onto target B and so nothing happens.

The command is nonsense in any case where branch name is repeated like that. This is because the range of commits will be some commits which are already in that branch and during rebase all of them will be skipped.

You won't notice that after rebase git moves branch to most recently rebased commit and does git checkout branch (see git reflog history). What is interesting when 2nd argument is commit hash instead branch name rebase still works but there is no branch to move so you end up in "detached HEAD" instead being checked out to moved branch.

The master in --onto is taken from 1st git rebase argument.

So practicaly it can be any other commit or branch. This way you can limit number of rebase commits by taking the latest ones and leaving primary diverged commits.

Will rebase single commit pointed by HEAD to master and end up in "detached HEAD".

The default HEAD or current_branch argument is contextually taken from place you're in. This is why most people checkout to branch which they want to rebase. But when 2nd rebase argument is given explicitly you don't have to checkout before rebase to pass it in implicit way.

This means you can rebase commits and branches from any place. So together with Automatic checkout after rebase. you don't have to separately checkout rebased branch before or after rebase.

To better understand difference between git rebase and git rebase --onto it is good to know what are the possible behaviors for both commands. git rebase allow us to move our commits on top of the selected branch. Like here:

Simply put, git rebase --onto selects a range of commits and rebases them on the commit given as parameter.

Read the man pages for git rebase, search for "onto". The examples are very good:

In this case you tell git to rebase the commits from topicA to topicB on top of master.

Git wording is a bit confusing here. It might help if you pretended that the command looks like this:

If we are on branch now, it can be omitted:

And if new_base is the same as old_base, we can omit the --onto parameter:

This might sound weird: how are you rebasing if the old base is the same as new base? But think about it like this, if you have a feature branch foo, it's already (likely) based on some commit in your main branch. By “re-basing”, we are only making the commit it's based on more current.

(In fact, <old_base> is something that we compare branch against. If it's a branch, then git looks for a common ancestor (see also --fork-point); if it's a commit on current branch, the commits after that are used; if it's a commit that has no common ancestor with current branch, all commits from current branch are used. <new_base> can also be a commit. So, for instance, git rebase --onto HEAD~ HEAD will take commits between old base HEAD and current HEAD and place them on top of HEAD~, effectively deleting the last commit.)

by using the commands:

you will get following commit hierarchy.

There is another case where git rebase --onto is hard to grasp: when you rebase onto a commit resulting of a symmetric difference selector (the three dots '...')

rebase: fast-forward --onto in more cases

Before, when we had the following graph,

running 'git rebase --onto master... master side' would result in D being always rebased, no matter what.

At this point, read "What are the differences between double-dot '..' and triple-dot "..." in Git diff commit ranges?" 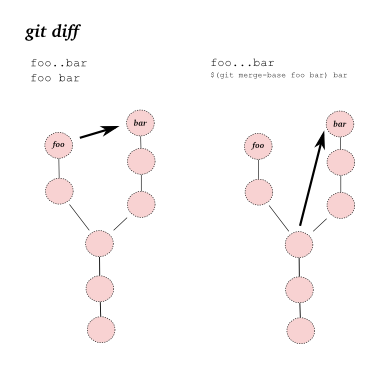 Here: "master... " refers to master...HEAD, which is B: HEAD is side HEAD (currently checked out): you are rebasing onto B.
What are you rebasing? Any commit not in master, and reachable from side branch: there is only one commit fitting that description: D... which is already on top of B!

Again, before Git 2.24, such a rebase --onto would result in D being always rebased, no matter what.

However, the desired behavior is that rebase should notice that this is fast-forwardable and do that instead.

That is akin to the rebase --onto B A of the OP, which did nothing.

Add detection to can_fast_forward so that this case can be detected and a fast-forward will be performed.
First of all, rewrite the function to use gotos which simplifies the logic.
Next, since the

conditions were removed in cmd_rebase, we reintroduce a substitute in can_fast_forward.
In particular, checking the merge bases of upstream and head fixes a failing case in t3416.

The abbreviated graph for t3416 is as follows:

and the failing command was

Before, Git would see that there was one merge base (C, result of master...topic), and the merge and onto were the same so it would incorrectly return 1, indicating that we could fast-forward. This would cause the rebased graph to be 'ABCFG' when we were expecting 'ABCG'.

A rebase --onto C F topic means any commit after F, reachable by topic HEAD: that is G only, not F itself.
Fast-forwarding in this case would include F in the rebased branch, which is wrong.

With the additional logic, we detect that upstream and head's merge base is F. Since onto isn't F, it means we're not rebasing the full set of commits from master..topic.
Since we're excluding some commits, a fast-forward cannot be performed and so we correctly return 0.

Add '-f' to test cases that failed as a result of this change because they were not expecting a fast-forward so that a rebase is forced.

4
How to rebase a branch after its base branch was rebased on master
229
What are the differences between double-dot ".." and triple-dot "..." in Git diff commit ranges?
4
Branch off a branch, How to rebase on another branch?
2
git - move specific commits from develop to feature branch
3
Git Merge and unset reverted commits
2
Rebasing commits that are identical in content, but different in hash
1
Remove first pushed commit of a branch
0
Rebase branch without parent branch
2
Temporarily use commits from another feature branch
0
Why I'm getting conflicts when I merge the 3rd level branch to master after merging the 2 second level
See more linked questions