Parallel installation of EurekaLog 6.1 and 7

a parallel installation of EurekaLog 6.1 and 7.x on the same machine is possible.

Background: In my case, old software is working with EurekaLog 6.1.5 Enterprise and my plan was to keep it that way as the adaption made heavy use of the different event handlers offered by EurekaLog (which were refactored in version 7). New software was supposed to work with the newest version of EurekaLog (7.2.1 Enterprise) to support a 64-bit version.

Unfortunately, the setup process simply kills itself after the following dialog which (according to the source above) is supposed to be answered with "No". 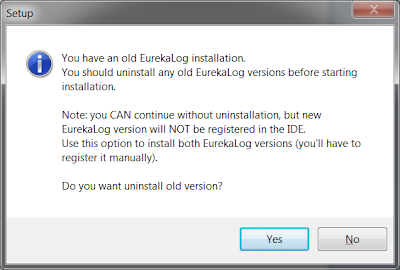 Has anybody else encountered this problem and found a solution?

According to the EurekaLog support, a parallel installation of version 6.x and 7.x is no longer possible. The linked blog post is outdated.

If legacy applications still want to use the interface of EurekaLog 6, the use of a "wrapper unit" is recommended:

EurekaLog 6 compatibility mode enables you to use behaviour from EurekaLog 6 instead of behaviour of EurekaLog 7. Enabling this mode will allow you to run your old applications without need to change them. However, some new features may be unaccessible.

However, according to the following Knowledge Base article, there is a workaround. You cannot use the installer, but have to manually install both EurekaLog versions.