"code ." is not working in on the command line for Visual Studio Code on OS X/Mac

The command code . doesn't work in this manual.

All the other steps before that worked. How can I call the Visual Studio Code in an OS X terminal?

I ended up opening it from within Visual Code Studio by changing the workspace, but why won't that command code . part work? 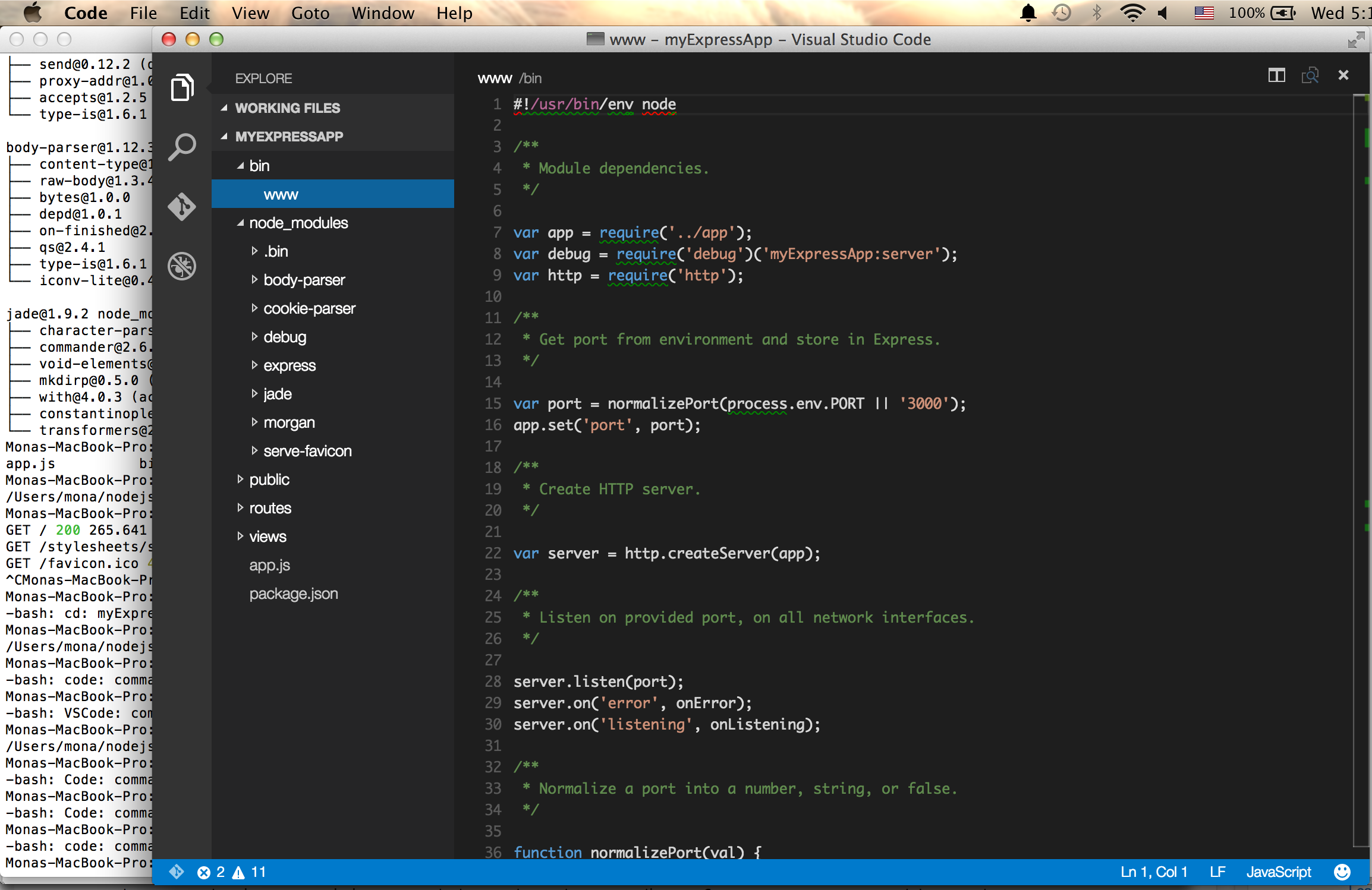 1. Make sure you drag the Visual Studio Code application into the Applications folder

Otherwise (as noted in the comments), you'll have to go through this process again after a reboot.

After executing the command, restart the terminal for the new $PATH value to take effect. You'll be able to simply type 'code .' in any folder to start editing files in that folder. The "." Simply means "current directory"

Note: If you're running a build based off the OSS repository, you will need to run code-oss . (Dzeimsas Zvirblis' comment)

If you want to add it permanently:

Enter the following by pressing i to insert:

Save the file using :wq

Reflect the settings in ~/.bashrc using the following command:

For those of you that run Z shell with iTerm2, add this to your ~/.zshrc file.

And write command install code and you will get a popup. Then follow the instruction and done!

Go the top of VS and select menu View → Command Palette...

On my Mac I got it working:

Save and in the terminal do 'source .bash_profile'.

Then in the terminal, code index.html (or whatever) will open that file in Visual Studio Code.

Setup code. In just one second

Just follow one simple command with the following steps:

Now use the command Code . where you want to use it.

For Mac OS X, there are three ways you can enable code . to open the current folder in Visual Studio Code.

For a fresh installation

There is a way to install Visual Studio Code through Brew-Cask.

If the above steps don't work then you can do it manually. By following Microsoft Visual Studio Code documentation given here.

If Visual Studio Code is already installed then you don't have to reinstall it. You can follow any of the below two options.

Press Enter to execute the above shell command.

Here are the steps which I followed to make it work on Mac: 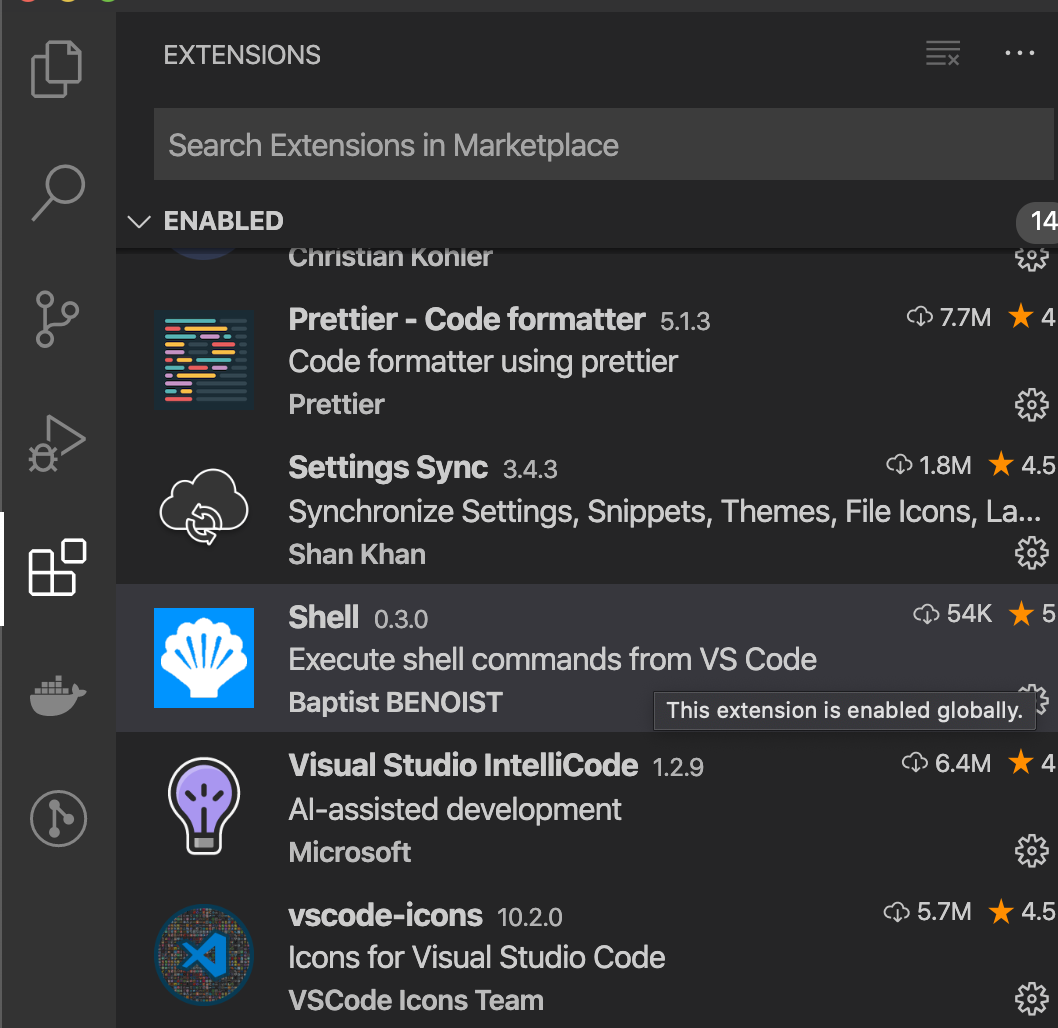 That will give you the following message: Shell command 'code' successfully installed in PATH.

Running the "which code" command will give you a proof the 'code' command is working now:

I tried this by following the documentation and it works for me:

Tip: If you want to run Visual Studio Code from the terminal, append the following to your .bashrc file file:

This works for me:

It was quite simple to follow the documentation to install 'code' to PATH, but it didn't work.

Then install it again.

Restart your terminal to have the new PATH included.

If you are using Visual Studio Code Insiders build:

For that to work, there needs to be an executable named 'code' in your Bash path, which some installers add for you, but this one apparently did not.

The best way to do this could be to add a symbolic link to the Visual Studio Code application in your /usr/local/bin folder. You can do this by using a command like the following in your terminal.

You will likely need to put sudo in front of that to have the permissions for it to complete successfully.

I foolishly deleted my /usr/local/bin/code symbolic link and did not know the correct path. A Homebrew reinstall recreated it:

The path turned out to be:

Tip: If you want to run Visual Studio Code from the terminal, append the following to your ~/.bash_profile file (~/.zshrc in case you use Z shell (executable zsh)).

Now, you can simply type code . in any folder to start editing files in that folder.

If this is happening on Linux Mint or Ubuntu, it is likely because you installed Visual Studio Code through the software manager. This will cause other problems during debugging. Instead install it using the .deb file on the Visual Studio Code website.

If you really want to use the software manager, the solution below still works:

Use find / -name code 2> /dev/null to find the path to the Visual Studio Code binary file. It should end in /extra/vscode/bin/code

If you're using the Linux Mint software manager, you might only find paths with a ridiculously long name in the middle like this:

Once you have it, create a symbolic link:

If you don't have the rights, or only want it to be accessible for yourself, simply add this line to your .bashrc or .zshrc file:

Note that I removed the 'code' filename at the end.

If you are on Windows and facing the same problem, have a look at Inazense's answer, Visual Studio Code - "Shell Command: Install 'code' command in PATH command.".

In Visual Studio Code I was not able to find “Shell Command: Install 'code' command in PATH command.” so I had to do this manually.

Now you are done! Restart the command prompt and try again.

I was having the same problem. I had to add Visual Studio Code to my applications folder. It worked without editing a file.

This will work for you.

If you have trouble using the Command Palette solution, you can manually add Visual Studio Code to the $PATH environment variable when your terminal starts:

Alternative to a command line solution:

Recently I was playing with services in Mac OS X. I added a service to a folder or file so that I can open that folder or file in Visual Studio Code. I think this could be an alternative to using the 'code .' command if you are using the Finder app.

Here are the steps:

Define the path of the Visual Studio Code in your ~/.bash_profile file as follows:

It might be possible that you have not installed Visual Studio Code in your system. So, please install it first. the command is here -

code-insiders . is not opening the current directory. It opens the path to code insiders instead.

This has been fixed.

For macOS, search for the Visual Studio Code application. For example, it was in my Downloads section.

Now copy that to the Applications folder and then run the following commands.

You are all sorted now.

xiongkailingxiongkailing
5722 bronze badges
Add a comment  |
1
2 Next
Highly active question. Earn 10 reputation (not counting the association bonus) in order to answer this question. The reputation requirement helps protect this question from spam and non-answer activity.

Not the answer you're looking for? Browse other questions tagged macos visual-studio-code or ask your own question.

3061
How do I make git use the editor of my choice for commits?
31
Visual Studio Code - "Shell Command: Install 'code' command in PATH command."
3
Mac OSx and VS Code: getting `LSGetApplicationForInfo() failed with error` when starting from terminal
0
Not able to run Azure functions in VS code in mac?
0
Trying to install MonoGame for mac and VS Code
1
Visual Studio command line shortcut doesn't persist after closing the editor