How do programmers work together on a project?

I've always programmed alone, I'm still a student so I never programmed with anyone else, I haven't even used a version control system before.

I'm working on a project now that requires knowledge of how programmers work together on a piece of software in a company.

How is the software compiled? Is it from the version control system? Is it by individual programmers? Is it periodic? Is it when someone decides to build or something? Are there any tests that are done to make sure it "works"?

Actually, there are as many variations on these processes as many companies there are. Meaning: every company has a little bit different conventions than others, but there are some common best practices that are generally used in most places.

Best practices that are always useful

These simple things ensure that the project doesn't go out of control and everyone works on the same version of the code. The continuos integration process helps when something goes terribly bad.

It also prevents people from committing stuff that don't build to the main repository.
If you want to include a new feature that would take days to implement and it would block other people from building (and testing) the project, use the branches feature of your version control.

If that is not enough, you can set it up to do automated testing, too, if that is possible with the project in question.

The above list can be very heavyweight at first glance. I recommend that you follow it on an as-needed basis: start with a version control and a bug tracker, then later on set up the continuous integration server, if you need it. (If it's a large project, you're gonna need it very soon.) Start writing unit tests for the most important parts. If it's not enough, then write more of them.

For version control, I tend to use Git for my personal projects nowadays. Subversion is also popular, and for example, VisualSVN is quite easy to set up if you use a Windows server. For client, TortoiseSVN works best for many people. Here is a comparison between Git and SVN.

For bug tracking software, Jira and Bugzilla are very popular. We also used Mantis at a previous workplace.

For continuous integration software, there is Teamcity for one (also, CruiseControl and its .NET counterpart are notable).

Answer to your question "who decides the main design of the project?"

It is a complex task, and usually more than one people are involved. Sometimes members of the team are also asked to participate or brainstorm about the design of the entire project or specific parts.

I'm a student as well, who completed a software engineering course recently where the entire semester consisted of a giant group project. Let me just start by saying we could have done with 3 people what it took 12 of us the whole semester to do. Working with people is a tough thing. Communication is key.

Definitely utilize a repository. Each person can remotely access all the code, and add/delete/change anything. But the best part about subversion is that if someone breaks the code, your can revert to an earlier version and assess what went wrong from there. Communication is still key though, know what your teammates are doing so that there are no conflicts. Don't sit on your code either, make quick, meaningful commits to the repository to be the most effective.

**I'd also recommend a bug tracker, such as Redmine. You can set up accounts for everyone, and assign people tasks with different priorities, and also track and see if people have taken care of certain problems, or if more have come up.

And, as has been said before, unit testing will help greatly. Best of luck! Hope this helped :-)

Developers never work as a team. Teams suck. Dilbert is funny not because he's a comical character like Goofy. He's funny because he's real and people recognize the situations he's in. 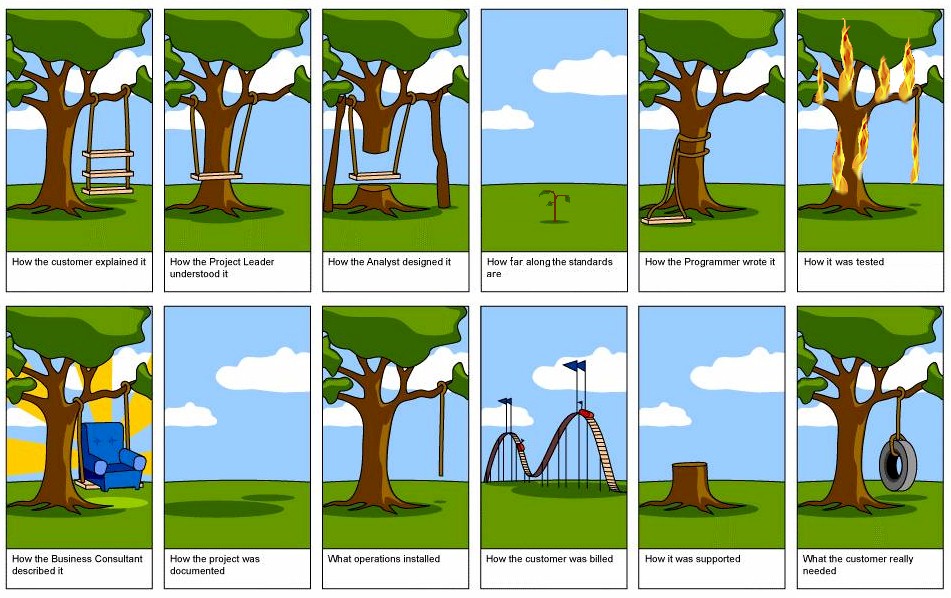 Generally it is good practice not to check build artifacts into the repository. The repository will contain the source tree, build configuration, etc - anything written by a human. Software engineers will check out a copy of their code onto their local filesystem and build it locally.

It is also good practice to have unit tests which are run as part of the build process. This way, a developer will know instantly if his changes have invalidated any of the unit tests, and will have the opportunity to fix them before checking in his changes.

You might like to look into the documentation for a version control system (one of Subversion, CVS, Git, etc) and for a build system (for example, in Java there are Ant and Maven).

The big things are:

Finally, you need a willingness to work together toward fulfilling the plan. That's all too often the tough part.

There is no standard for the things you're asking about. Rather, there are conventions and these depend heavily on the size and maturity of the organization. If you're in a small organization, say a couple of programmers, then things will probably be somewhat informal with the individual developers doing coding, builds, and test.

In larger organizations, there may be a dedicated build engineer and process. This kind of organization will usually do a formal build on a regular basis, say once a day, using whatever source code is checked in. The process will also usually include BVT (Build Validation Tests) and perhaps some regression tests. Developers will check out the code from the repository, work on their own portion locally, then check it in.

In the largest organizations, like Microsoft or Google, they will have a completely dedicated group and full lab that will build on a more-or-less continual basis, making the results of each run available. These organizations have very formal processes and procedures in place about what gets checked in and when, what the code review processes are, etc.

The build can be done either by each developer when adding new code, or periodically by a "build server". The last approach requires more setup, but helps finding out build errors sooner.

The short answer - "It depends".

Currently, I'm working on a project by myself, so I'm the one who builds/uses VCS. I know of other places that you have teams working on the project together by shudder email. Or big (+5) teams using VCS.

On that note, I highly recommend learning at least some VCS, and Joel Spolsky has a great introductory tutorial for Mercurial. Bazaar (my personal choice) is similar, and then Git is the next nearest in terms of similarity, but probably more popular than either (at least ATM). After that you have SVN which is pretty weak in comparison.

Actually, Joel talks about most of your questions - I'd recommend reading the 10 years of archives he has - it's all highly useful information, and most of it pertinent to your current and near-future situation.

Proper programming is a deep thing that benefits greatly from experience. Pair-programming is like running multiple processors of awareness... one can overlook something seen by the other and so long as they are communicating it can result in great progress.

First of all, teams work by using repositories (which can be professional version control, or just a bunch of directories that is considered the 'live' one, however a revision control system is the de facto standard). Also, how the project is managed strategy depends on how you work (waterfall, agile, etc.). If you work in iterations, you build components/plugins/modules/libraries which are self-sustained, and you perform unit testing, until its signed off as finished. As a team, you work in a team which means you do don't work on the entire project everywhere at the same time. Instead, you get a task to perform inside a realm of the project. On some occasions you have to fix code that isn't yours, but that comes usually when a strange behavior occurs. Basically, you are doing the testing of the parts you develop.

Let me examplify this for you. You are inside a team of construction workers. The architect comes with a plan for a building, the foreman looks what the necessities are to construct and then hires the constructors. The mason does the walls, checks them for strength and glues them up nicely. The electrician does all the wiring inside the building so electricity can flow. Each man has their own job. Sometimes, the electrician might want to discuss with the mason if certain walls can be carved, but always in conjunction with the foreman.

I hope this is some help for you!

Typically, the source control system contains the source code and usually does not have the binaries. If you want to build it and run it, you would check the code out and build it on your local machine.

Some places run nightly builds to make sure everything works. There may even be some automated tests that are ran server-side. If the build or anything else fails, someone is notified automatically.

In his examples he uses SourceGear Vault since he wrote it and all, but the methods can be applied to other version control systems.

This is again one good reason why one should look into Open Source projects.

The lead developers who work in big OpenSource projects (like Chromium , Mozilla Firefox, MySQL , Popular Gnu Software) are professionals. They have lot of experience and these projects have evolved over years with ideas from hundreds of such professionals.

Everything others mentioned in their answers (Plan, Version control system , Issue tracker , Notification system , Build system, Test suite, ) can be found in these OpenSource projects.

If you really want an hands on experience I strongly suggest you to go through some popular & big OpenSource projects and then get the Source from any project (using Version Control) and build it your self.

PS: I'm also a student and involving in OpenSource projects is the best thing I ever did in my life. Trust me! you'll also feel the same.

Not the answer you're looking for? Browse other questions tagged unit-testing version-control compilation continuous-integration or ask your own question.

393
Why is Git better than Subversion?
712
How can I revert a single file to a previous version?

2969
How do I test a class that has private methods, fields or inner classes?
5456
How do I discard unstaged changes in Git?
2878
I ran into a merge conflict. How can I abort the merge?
5091
How can I reset or revert a file to a specific revision?
2639
How to change the author and committer name and e-mail of multiple commits in Git?
23345
How do I undo the most recent local commits in Git?
1816
How does Git handle symbolic links?
8285
Git: How do I force "git pull" to overwrite local files?
18511
How do I delete a Git branch locally and remotely?
9792
How do I rename a local Git branch?