How to use Visual Studio Code as default editor for git?

When using git at the command line, I am wondering if it is possible to use Visual Studio Code as the default editor, i.e. when creating commit comments and looking at a diff of a file from the command line.

I have tried an approach similar to what I have done for Notepad++ in the past, i.e.

But this results in an error message:

Code opens up correctly, with the expected content, but it isn't waiting on the response, i.e. clicking save and closing the window to return to prompt.

I have just heard back from one of the developers working on VSCode. Looks like this functionality currently isn't supported :-(

If you are interested in seeing this feature get added, you might want to think about adding your votes here:

I have been reliably informed that this feature has been picked up by the VSCode team, so I am looking forward to a future release that will include it.

Thanks to @f-boucheros comment below, I have been able to get VS Code working as the default editor for commit comments, rebase, etc. I would still like to see if it is possible to use it as the diff tool as well.

As per the accepted answer for the question, this is now possible using the V1.0 release of code.

In the most recent release (v1.0, released in March 2016), you are now able to use VS Code as the default git commit/diff tool. Quoted from the documentations:

Now you can run git config --global -e and use VS Code as editor for configuring Git. 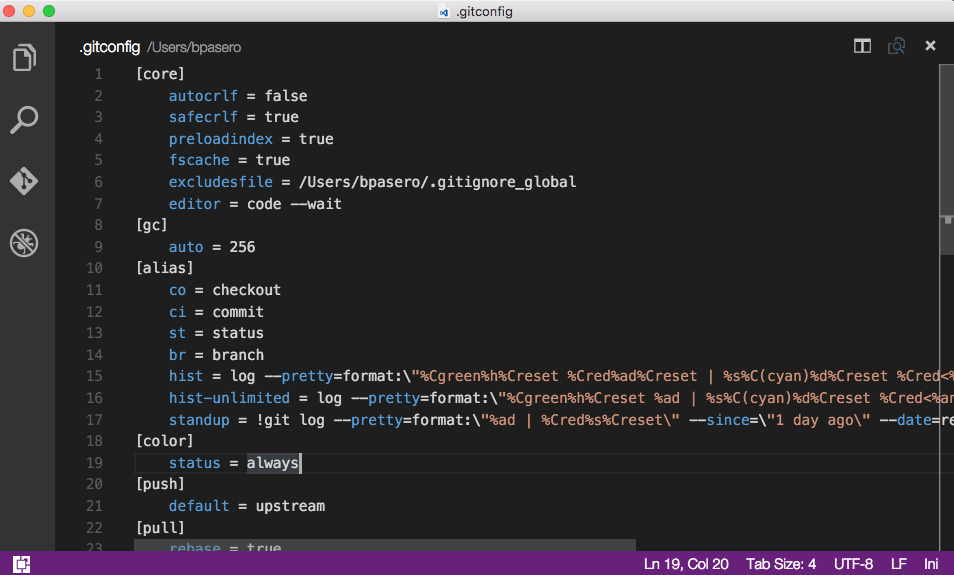 Add the following to enable support for using VS Code as diff tool:

This leverages the new --diff option you can pass to VS Code to compare two files side by side.

To summarize, here are some examples of where you can use Git with VS Code:

For what I understand, VSCode is not in AppData anymore.

So Set the default git editor by executing that command in a command prompt window:

The parameter -w, --wait is to wait for window to be closed before returning. Visual Studio Code is base on Atom Editor. if you also have atom installed execute the command atom --help. You will see the last argument in the help is wait.

Next time you do a git rebase -i HEAD~3 it will popup Visual Studio Code. Once VSCode is close then Git will take back the lead.

I hope that help.

You can set it for current session using:

This way not only git, but many other applications will use VS Code as an editor.

To make this change permanent, add this to your ~/.profile for example. See this question for more options.

Another advantage of this approach is that you can set different editors for different cases:

This is useful especially with VS Code (or any other GUI editor) because it just doesn't work without GUI.

On Linux OS, put this into your ~/.profile:

For the difference between EDITOR and VISUAL environment variables please see this question.

Your configuration will open in Visual Studio Code.

You need to use command:

Make sure you can start your editor from Git Bash

If you want to use Code.exe with short path, you can do this by adding the following line to your .bash_profile:

And now, you can call it using only vscode command(or whatever you named it)

Setup will add Visual Studio Code to your %PATH%, so from the console you can type 'code' to open VS Code on that folder. You will need to restart your console after the installation for the change to the %PATH% environmental variable to take effect.

I opened up my .gitconfig and amended it with:

However, I noticed that after I tried an arbitrary git commit that in my Git Bash console I see the following message:

Unsure of what the ramifications of this might be.

Good news! At the time of writing, this feature has already been implemented in the 0.10.12-insiders release and carried out through 0.10.14-insiders. Hence we are going to have it in the upcoming version 1.0 Release of VS Code.

Run this command in your Mac Terminal app

with commit 1428d44, diff editors now have a chance to survive reloads and this works OK unless the diff editor on a git resource is opened as the active one:

GitPad sets your current text editor as the default editor for Git.

My default editor for .txt files in Windows 10 is Visual Studio Code and running GitPad once made it the default editor for Git. I haven't experienced the problems mentioned in the question (Git waits until VS Code window is closed in my case).

(The link for the .exe file didn't work for me, you may need to compile the source yourself.)

Just want to add these back slashes to previous answers, I am on Windows 10 CMD, and it doesn't work without back slashes before the spaces.

what command line options would be required in the .gitconfig file to make this happen?

I had to add this to my .gitconfig file for git-lense to work:

-n is optional – as Alex mentioned below it's short for --new-window and I find it helpful :)

I added git bash in vscode terminal as default If you are lazy like me. Then I advise you to do the same as me.

Im not sure you can do this, however you can try these additions in your gitconfig file.

Try to replace the kdiff3 from these values to point to visual studio code executable.

I set up Visual Studio Code as a default to open .txt file. And next I did use simple command: git config --global core.editor "'C:\Users\UserName\AppData\Local\Code\app-0.7.10\Code.exe\'". And everything works pretty well.

on windows 10 using the 64bit insiders edition the command should be:

you can also rename the 'code-insiders.cmd' to 'code.cmd' in the 'Program Files' directory, in this way you can now use the command 'code .' to start editing the files on the . directory

Not the answer you're looking for? Browse other questions tagged git visual-studio-code or ask your own question.

1
VS Code Doesn't Wait for Me During an Interactive Rebase
0
I can't seem to get this message to go away and it won't let me commit changes
0
Command not found when using git commit
3040
How do I make git use the editor of my choice for commits?
2826
How to modify a specified commit?
619
How can I set up an editor to work with Git on Windows?
71
Multiline git commit message in VSCode
37
Setting Visual Studio Code as my Mac's default editor (including editing Git commits)
31
Set Visual Studio Code to be global Git editor on OSX
8
git giving error about vim running in cmd
See more linked questions