Replace token in file before building, but keep token in sources

I want to replace a @VERSION@ token in a java source file with a version before building (Gradle is my build system of choice).

In my current script ant.replace(file: 'src/main/java/randers/notenoughvocab/main/Reference.java', token: '@VERSION@', value: version) it replaces the occurrences of @VERSION@ in the actual source file, so after a build all occurrences of the pattern have been replaced by the version and if I change the version the the gradle build file it will no longer find any patterns in there and the version will not update.

I have also seen a task here, but I do not get what values need to be applied for my specific project.

The project layout for my project, if that is needed: 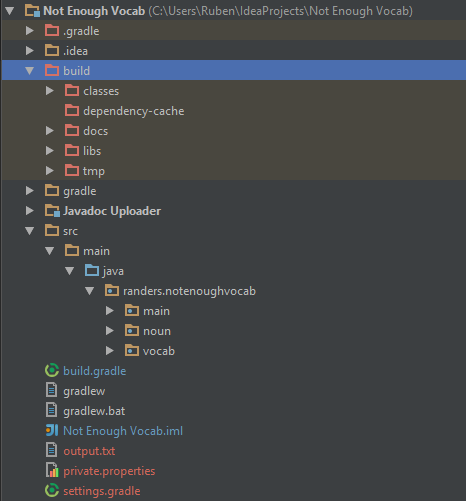 You only need to replace @VERSION@ tokens before releasing your software to the public. Here I defined a task compileForRelease that accomplishes it:

I don't recommend messing with standard tasks defined by the Java plugin because that would add unnecessary overhead to each and every build.

WARNING: As indicated in comments by @Raffaele filtering source code may result in serious problems. This answer assumes that you know well what are you doing and are conscious about potential problems that may occur.

The problem is in the fact that java source files are not copied - they're compiled only - in place. So you need to:

Not sure about paths but the following piece of code should be helpful:

I found existing answers somewhat unsatisfying, so here is my solution:

This addresses various concerns as follows:

I faced the same problem. And I was unable to find working solution. None of the examples I found worked. I believe it might to a fact, that I am new to Gradle and those examples omit some obvious pieces of code. So I looked into Gradle and found my own solution, that I'd like to share:

To complement other answers, I found this idiom more simple if there's only one value you are looking to change:

Not the answer you're looking for? Browse other questions tagged java gradle or ask your own question.

3
How can I modify Java source code in my Gradle project prior to compilation without modifying the files on disk?

323
How do I tell Gradle to use specific JDK version?
6
Gradle not loading Java class files compiled from Java source placed in buildsrc
3
Gradle: replace tokens with project properties
155
Why should the Gradle Wrapper be committed to VCS?
9
Gradle java project replace single line in file during build
91
Add resources, config files to your jar using gradle
171
Best way to add Gradle support to IntelliJ Project
4
How is a token replaced in a file for a Gradle build product?
4
Replace File in Gradle Build
788
Error retrieving parent for item: No resource found that matches the given name after upgrading to AppCompat v23