I press Shift+Enter, but not working, Ctrl+Enter start a new line, but not add semicolon at the end of previous line. Is there a shortcut?

Now there is an extension called Colonize:

Ctrl+Alt+Enter Insert semicolon and stay at the same position

Visual Studio Code doesn't appear to directly support adding a semi-colon to the end of a line via a keyboard shortcut, meaning it'll need a custom extension to support it. Fortunately, Sergii Naumov has created one for us, named (appropriately) 'Trailing Semicolon'.

To install this extension:

According to Sergii, the default keybinding for the extension is "cmd+;". On my Mac, this meant pressing "Command+;", which worked great.

On my Windows 10 PC, I tried several key combinations ("Window+;" "Ctrl+;" "Alt+;" etc.), and nothing worked. I opened the Keyboard Shortcut preferences (File > Preferences > Keyboard Shortcuts) and searched for the new extension. I found it listed at the end of the keybindings:

The "win" key binding apparently doesn't work. I copied this binding to the keybindings.json file, changed "win+;" to "ctrl+;" and it worked like a charm!

There is also experimental support for complete structures like class, interface, function, if, switch, for, and while. (Not understanding semantic of languages, so it may not work as you expected.)

You can install it as VSIX at GitHub.

The version vscode marketplace is outdated. (Unfortunately my M$ account has been suspended, thus I cannot update it.)

There is no way to do it by default that I could find. I just had to make do as best I could.

I ended up adding a binding via File>Preferences>Keyboard Shortcuts, and then pressing ; after the shortcut. Having the semicolon is part of the binding is as close as I could get... at least my finger is already over that key

This simply means that Ctrl+; brings you to the end of the line, and then tap ; again.

Started using VSCode Vim keybindings extension a few months ago. Highly recommend it. Out of interest, semi-colon end of the line is A; with vim keys⌨️

Try install the following ext then use shortcut: Ctr+; (Cmd+;) 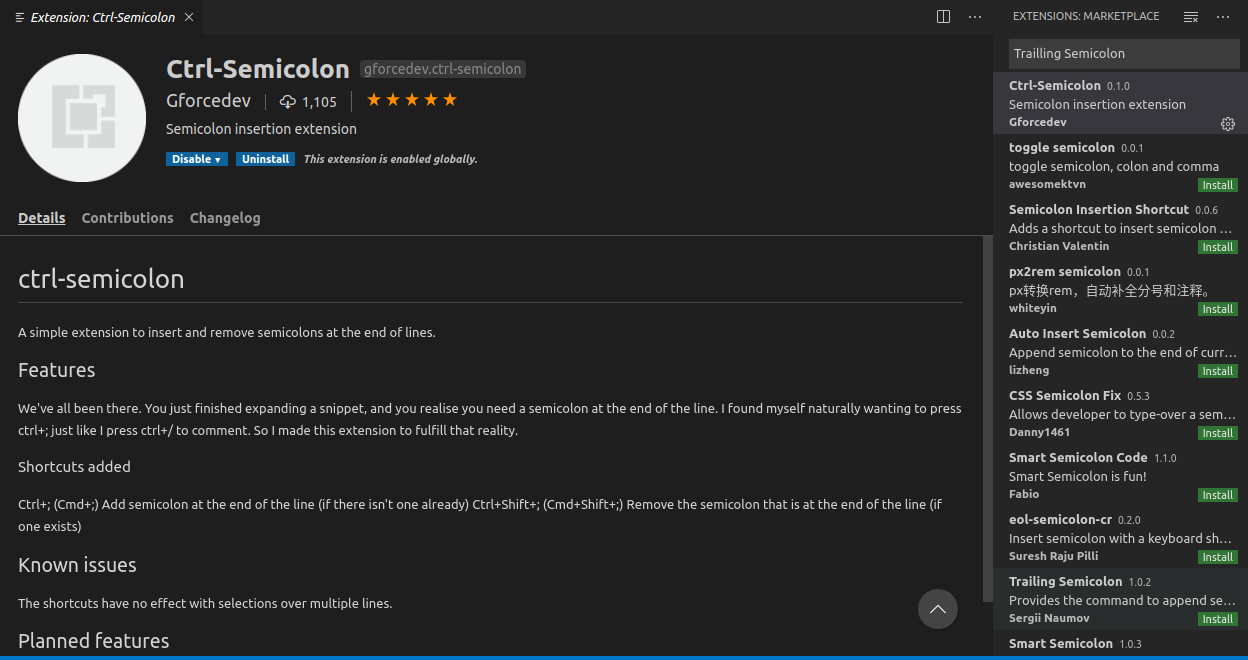 settings >search for colon You will find a javascript option to insert the semi-colon.

I just started using Visual Studio Code and felt this requirement myself yesterday. After a quick google search I found this nice extension called "Prettier". Being a little new to VSCode it took me a few hours to get it all setup but it works like a charm now. Here are the steps and my setup. I hope it helps others.

My coding environment: VSCode running on a Windows 10 desktop environment connecting to my codebase SMB share hosted on my development machine which is running Ubuntu server 18.04.

Ctrl+Shift+P and open Preferences:Open keyboard shortcuts (JSON) in VS Code

tab is optional, ofc. Put whatever you want from the keys on the keyboard.

I know this is a really old post but Prettier - code formatter for vs code adds the semi colon (amongst other formatting).

As ST7 mentioned, you can add the Colonize extension, but apparently Visual Studio (I'm currently using 2017) contains Shift+Enter shortcut by default, which unlike Colonize, continues on the new line.

If you need semicolons on Javascript/Typescript using vscode do:

you will have options for Javascript & Tyepscript

select the "insert" option as desired

You can also select semicolons for css, less, or scss

You can select the "Show matching extensions" and get some extra help with extensions that address the same issue.

It's in Visual Studio's Preferences. Solution from sbi's answer here: