How do I hide certain files from the sidebar in Visual Studio Code?

In Visual Studio Code, what setting can be configured, using file patterns, to hide files from view in the sidebar's file-explorer?

visual-studio-code configuration
Share
Improve this question
edited May 12 at 21:38

You can configure patterns to hide files and folders from the explorer and searches.

When you are done it should look something like this:

If you want to directly edit the settings file: For example to hide a top level node_modules folder in your workspace:

To hide all files that start with ._ such as ._.DS_Store files found on OSX:

Sometimes you just want to hide certain file types for a specific project. In that case, you can create a folder in your project folder called .vscode and create the settings.json file in there, (i.e. .vscode/settings.json). All settings within that file will affect your current workspace only.

For example, in a TypeScript project, this is what I have used:

Make Hidden provides more control over your project's directory by enabling context menus that allow you to perform hide/show actions effortlessly, a view pane explorer to see hidden items and the ability to save workspaces to quickly toggle between bulk hidden items.

The __pycache__ folder and *.pyc files are totally unnecessary to the developer. To hide these files from the explorer view, we need to edit the settings.json for VSCode. Add the folder and the files as shown below:

I would also like to recommend vscode extension Peep, which allows you to toggle hide on the excluded files in your projects settings.json.

You can bind "extension.peepToggle" to a key like Ctrl+Shift+P (same as F1 by default) for easy toggling. Hit Ctrl+K Ctrl+S for key bindings, enter peep, select Peep Toggle and add your binding.

For .meta files while using Unity3D, I found the best pattern for hiding is:

This captures all folders and subfolders, and will pick up foo.cs.meta in addition to foo.meta

If you're using VSCode:

You shouldn't need to restart or reload VSCode to take effect

There are a couple very cool new features that let devs configure the files that show in the sidebar, as well as offering new ways of hiding files, while keeping them accessible.

So the best answer included in this post, originally, was the "files.exclude"

Because "File Nesting" is IMO one of the coolest features added to VS Code in recent releases, I thought I'd take the time to create a animated GIF-image that shows how it works in real-time.

Below is a .gif image that shows the explorer.fileNesting feature being used in Real-time

File nesting is very cool, it is important to note, like most VS Code features, it does need to be custom configured for your personal development environment.

The above two notes point out that this is a feature aimed at improving the environment for compiled languages that have a compiler that emits project-build files; and specifically "transpilers" like TypeScript in other words,

Below shows a "File Nesting" configuration that you'll likely find written to "./.vscode/settings.json" file that belongs to a TypeScript project.

The above configuration is actually from one of my projects, and it results in the following behavior: 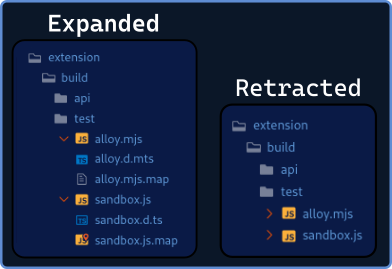 I have included below, a complete list of All available configurations, as well as the link to the official release-notes (early form of documentation) that covers the "VS Code File-nesting Feature".

As of 2022-06-17 the following list contains all configurations available for "VS Code's File Nesting Feature".

NOTE: "File excludes, has been covered by other answers so I will be brief."

"It's important we cover files.exclude though, as the next feature builds on it."

There are several ways you can use the two settings to configure your projects "file-explorer" (the file-tree in the side-bar). I use both explorer.fileNesting & "files.exclude". I nest certain groups of files that obviously share somthing in common. A common example given in the official docs for the file nesting feature is using file nesting to hide your package-lock.json file under your package.json file, which is obviously a great way to make use of file nesting.

However I take it a step further: I also hide my .npmrc file, and if I am writing an NPM-Package, I hide my .npmignore file with the package files too.

Here are two groups I create

The problem is with file nesting, you get a bunch of 1-offs, like .editorconfig (ya I can place it with my .eslintrc.json group, but it doesn't really fit their. And what about .gitignore. I suppose I could just leave .gitignore in the view.

Or I could use files.exclude, and configure my "files.exclude": {} object in my project's .vscode/settings.json file to hide files like .gitignore, LICENSE, .editorconfig, etc...

By default, files.exclude hides project's .git/ directory, which is why you never see it.

Below is the default configuration I use for ESM NodeJS TypeScript projects, which is what most of my projects are. The configuration is generic, and changes from project to project.


The Latest Feature of the Bunch, Which I Edited in a bit after editing in File Nesting's new settings, is the new...

To configure the setting to on use explorer.excludeGitIgnore.

Remember, this setting, like the other two features, should not be thought of from a perspective of,

Its unhelpful, and counter productive to think in this way. Git Excludes (as the release notes say)...

...works alongside files.exclude to hide unwanted files from the Explorer.        ~ VS Code Release Notes v1.68

If your working on a Angular 2+ application, and like me you like a clean working environment, follow @omt66 answer and paste the below in your settings.json file. I recommend you do this once all the initial setup has been completed.

Note: This will actually hide the .vscode folder (with settings.json) in as well. (Open in your native file explorer / text editor if you need to make changes afterwards)

The accepted answer is perfect if you're looking to hide something like node_modules.
In the case you're working with a static meta-framework like Astro.js, you'll end up with index.astro files but also get a lot of noise because of dist/test/index.html or /dist/about-page/index.html etc... pages.

To exclude them from the command palette search but still be able to inspect the dist folder in your files tree, I recommend using the following in a .vscode/settings.json file

That way, you still keep it visible while not having it polluting your ctrl + p search.

PS: more info can be found here (submit the URL again after opening it to go to the highlight directly).

The most simple method to do this is to change your workspace settings by pressing F1 and selecting Preferences: Open Workspace Settings from the popup. After that scroll to the Files: Exclude row and add a tag - **/*.class in the list and now the .class files will not be shown in the Vscode Project File Explorer.

Open Settings and search for Files.Exclude then click on add pattern then it will give a notification Unable to write into user settings. Please open the user settings to correct errors/warnings in it and try again. Now open that settings.json file and search for files.exclude{ } block and include "**/*.exe": true Here I use .exe as example, Instead of that use the extension whatever you want to block. I hope this helps.

Not the answer you're looking for? Browse other questions tagged visual-studio-code configuration or ask your own question.

2
How to hide .class files in VS Code?
1
Is there a way to stop tracking folder in VS Code with out gitignore?
342
Hide .js.map files in Visual Studio Code: File Nesting
3
How to hide autogenerated files from VS code
4
visual code - excluding files with several conditions
4
.gitignore not ignoring node_modules/ folder
6
How to exclude all but certain files in the sidebar in Visual Studio Code?
3
Way to remove the files/Directories from Excluded Changes in TFVC for Visual Studio Code
3
VS Code "Find All References" Can't Ignore Excluded Files
1
Exclude .history/ from the source control of vscode
See more linked questions