I'm writing a python spirograph program, and I need some help with converting part of it into a function. The code is attempting to reproduce the result illustrated in the video I found here. One line rotates around the origin, and then another rotates off the end of that, etc.

With a little bit of research into (what I think is) trigonometry, I put together a function rotate(point, angle, center=(0, 0)). The user inputs a point to be rotated, the angle (clockwise) that it is to be rotated by, and the centerpoint for it to be rotated around.

Then, I implemented an initial test, whereby one line rotates around the other. The end of the second line draws as if it were holding a pen. The code's a little messy, but it looks like this.

Great, works perfectly. My ultimate goal is what's in the video, however. In the video, the user can input any arbitrary number of arms, then define the length and angular velocity for each arm. Mine only works with two arms. My question, ultimately, is how to put the code I posted into a function that looks like drawSpiral(arms, lenlist, velocitylist). It would take the number of arms, a list of the velocities for each arm, and a list of the length of each arm as arguments.

I've already attempted this several times. Initially, I had something that didn't work at all. I got some cool shapes, but definitely not the desired output. I've worked for a few hours, and the closest I could get was this:

This is fairly close to my solution, I feel, but not quite there. Calling drawSpiral(2, [50, 75], [1, 5]) looks like it might be producing some of the right points, but not connecting the right sets. Staring at it for about an hour and trying a few things, I haven't made any progress. I've also gotten pretty confused looking at my own code. I'm stuck! The point rotating around the center is attached to a point that is just flying diagonally across the screen and back. The line attached to the center is stretching back and forth. Can someone point me in the right direction?

I've set up both functions to plot points at the ends of each arm, and found some interesting results. The first arm, in both cases, is rotating at a speed of 5, and the second at a speed of -3. The loop, outside of the function, is producing the pattern: 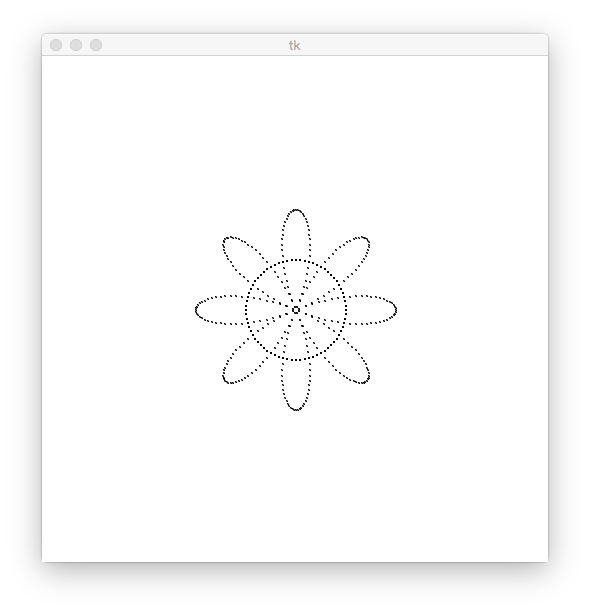 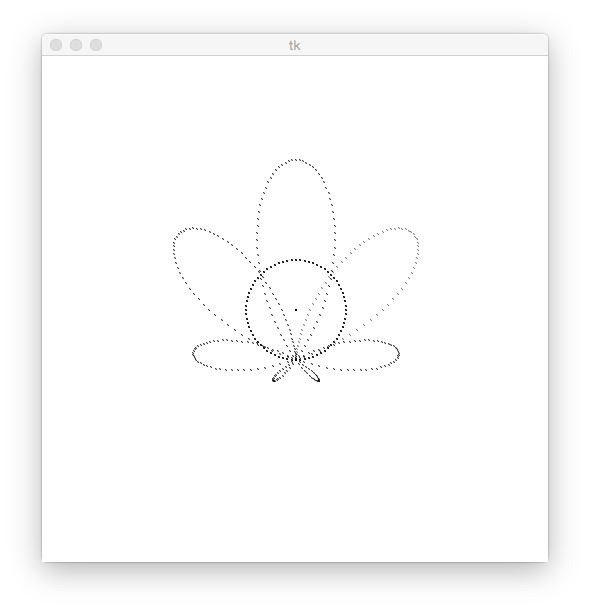 It seems to be stretching the top half. With both arms having a velocity of 5, the function would be expected to produce two circles, one larger than the other. However, it produces an upside-down cardioid shape, with the point connected to the center. 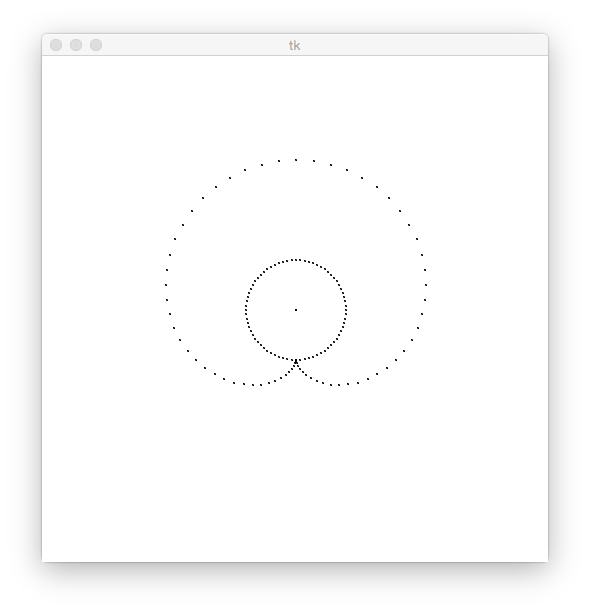 Now there's more evidence, can anyone who understands math more than me help me?

Your error is in

You go against the usual mathematical notation for polars (circular graphs) and that caused your confusion and eventual issues. As far as I can tell your function is plotting an (X,Y) point (0,length) and then finding the difference between that point and the center point (which is correctly defined as the last point you found) and rotating it around that center. The issue is that (0,length) is not 'length' away from the center. By replacing the (0,lenlist[n]) with (pointlist[n][0],lenlist[n]) makes the next point based upon the last point.

Also I would recommend editing your rotate function to be rotate(length,angle,centerpoint) which would simplify the inputs to a more traditional representation.

Not the answer you're looking for? Browse other questions tagged python function python-2.7 tkinter rotation or ask your own question.

2260
Calling a function of a module by using its name (a string)
2896
How do I split a list into equally-sized chunks?
7463
var functionName = function() {} vs function functionName() {}
3717
Using global variables in a function
2843
Convert string "Jun 1 2005 1:33PM" into datetime
3043
How do I make function decorators and chain them together?
2587
Set a default parameter value for a JavaScript function
2026
How to read a file line-by-line into a list?
1410
What does the exclamation mark do before the function?
1309
Passing parameters to a Bash function