I'm very excited to see that it is now possible to code Python in the browser. These are the main candidates (please add any I may have overlooked):

Please note: This is not a request for recommendations or opinions. I'm seeking objective facts that would inform an educated choice.

Running Python in the Browser is a really good and up-to-date (as of 2019) article that compares Brython, Skulpt, PyPy.js, Transcrypt, Pyodide, Batavia. I highly recommend reading it.

A good summary can be seen in the following pictures. 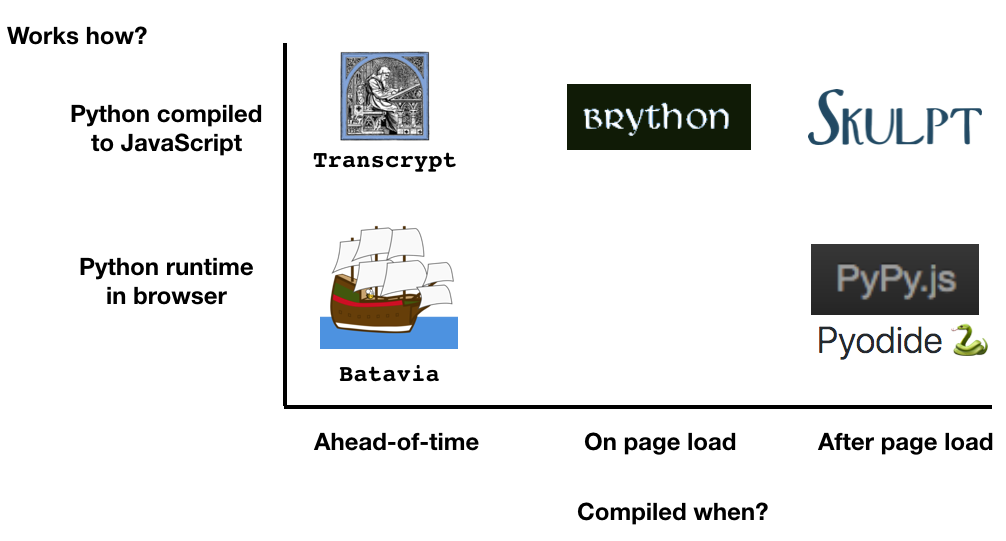 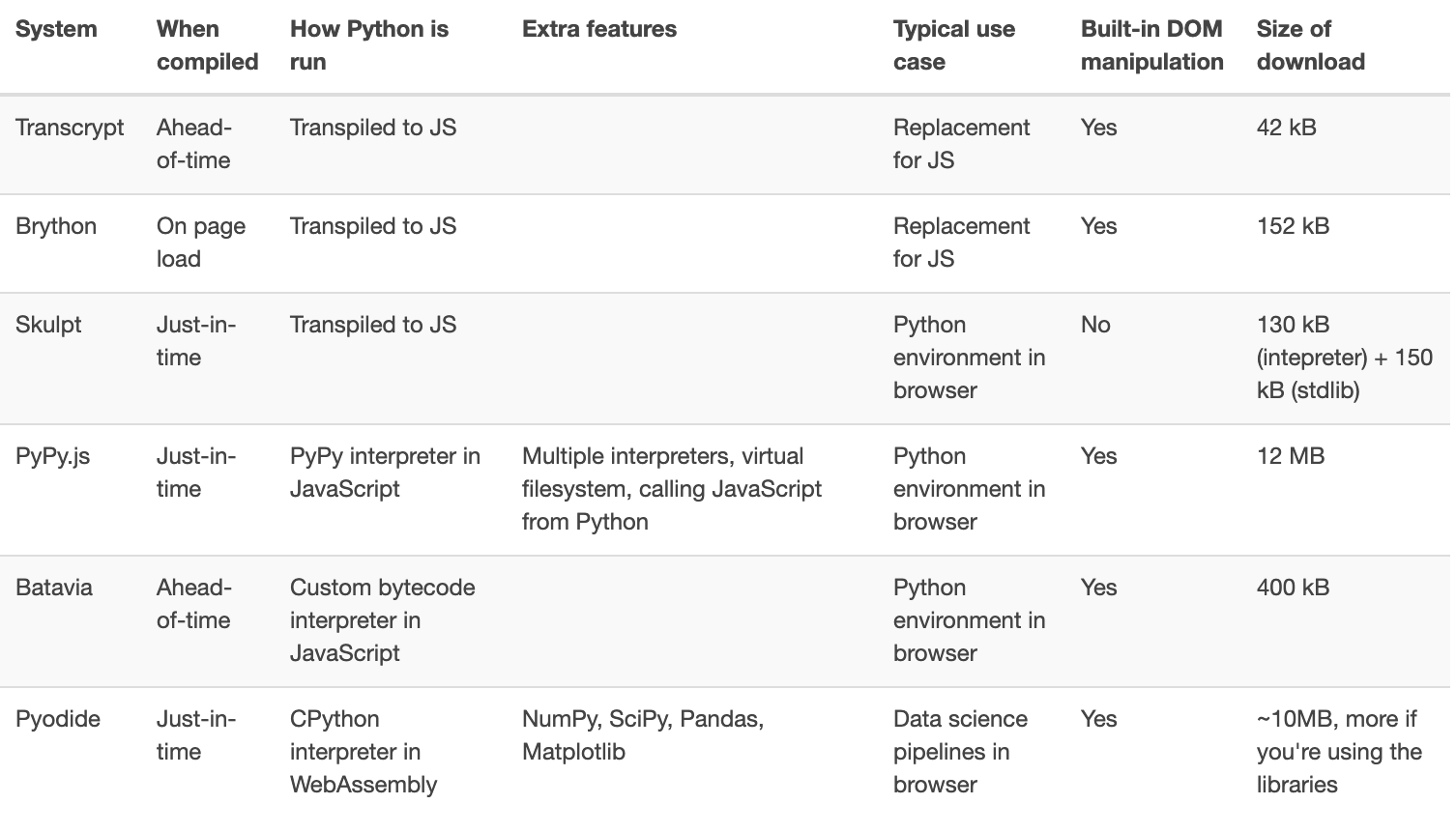 Here's some info on Brython vs Transcrypt (July 2016, since Transcrypt was added as an option on this question by the OP), gleaned by starting off a project with Brython a few months ago and moving to Transcrypt (completed moving last week). I like Brython and Transcrypt and can see uses for both of them.

For people that are new to this, Brython and Transcrypt both 'transpile' python input to javascript (Edit: maybe it's better to view Brython as a 'a Python implementation for the browser' because it doesn't produce standalone javascript). Both require Python 3 syntax. Brython includes a substantial number of Python standard libraries and some of it's own for dealing with web related things, whereas Transcrypt avoids that for the most part and suggests using Javascript libraries instead.

Brython (Github) can do the conversion in the browser. So you write in python and the brython.js engine converts it to javascript on the fly when the page is loaded. This is really convenient, and is much faster than you might think. However, the brython.js engine that you need to include in your pages is about 500Kb. Also, there's the matter of importing standard libraries, which Brython handles by fetching separate .js files with XHR requests. Some libs are already compiled into brython.js, so not every import will pull in new files, but if you use many imports, things can get slow. However, there are ways around this. What i did was to check the network tab in browser dev tools to see what files were being pulled in when the page was loaded, then delete all the files my project wasn't using in a copy of the Brython src folder, and run the script included with Brython (i think it's at Brython/www/scripts/make_VFS.py) that compiles all of the available libs into one file called py_VFS.js that you need to also link to from your html. Normally, it will make one huge 2MB+ file, but if you delete the things you aren't using, it can be quite tiny. Doing it this way, means you only need to pull in brython.js, py_VFS.js and your python code, and no additional XHR requests will be needed.

Transcrypt (Github)on the other hand, is distributed as a python 3 package that you can use manually, or hook into your toolchain, to compile python to javascript in advance. So with Transcrypt, you write in python, run transcrypt against the python and it spits out javascript that you can link to in your project. It is more like a traditional compiler also in that it offers some control over the output. For example, you can choose to compile to ES6 or ES5, or ask it to output sourcemaps (that during debugging let's the browser take you directly to the corresponding python code, insead of the generated javascript code.) Transcrypt's javascript output is pretty terse (or put another way, it's pretty and terse). In my case 150kB of python is converted to 165kB of unminified ES5 javascript. By way of comparison, the Brython version of my project used about 800Kb after conversion.

However, getting the benefits of Transcrypts terseness, requires reading the docs a bit (really just a bit). For example, with Transcrypt, Python's 'truthiness' for data structures like dict, set and list isn't enabled by default and globally enabling it is discouraged because of potential performance issues related to typechecking. For clarity: Under CPython, an empty dict, set or list has truth value False, whereas in Javascript it's considered 'true'.. Example:

There are at least three ways to address this:

Right, so my project was getting bigger and i wanted to pre-compile for a performance gain but found it hard to do so with Brython (though it's technically possible, an easy way being to use the online editor and click the javascript button to see the output). I did that and linked to the generated javascript from project.html but it didn't work for some reason. Also, I find it hard to understand error messages from Brython so i didn't know where to start after this step failed. Also, the big size of the outputted code and the size of the brython engine was beginning to bug me. So i decided to have a closer look at Transcrypt, which had at first seemed to be higher grade because i prefer dumbed down instructions that tell me how to get started immediately (these have since been added).

The main thing getting it set up after installing Python3.5 was:

I have rather simple needs, so your mileage may vary.

6) Also, you can't iterate dicts by default using 'for i in dict:', without enabling that (cmd line -i or __pragma__('iconv'), but you can avoid having to enable it by just using the keys() member e.g.:

Hope that helps someone see which of these might be good for their particular project.

This page benchmarks the three candidates. Brython emerges as a clear winner.

Despite the 'help' explaining that S.O. is not good for this kind of question, it appears that a concise answer is in this case possible.

Maybe people are being too hasty?

I've used and committed to skulpt as well as pypyjs. And they are all three very different that any comparison is moot if you ask me.

It depends on what you are looking for which will make the most sense.

pypyjs is huge it's a 12MB javascript file that contains the entire pypy virtual machine. So if you want python implementation completeness this is your baby. It has a javascript bridge that works really good but it's not a viable option for writing your javascript website code in python. It will however let you import compiler.

It's built with emscripten and is faster then CPython, in running the pystone benchmark.

I gave a short talk about pypyjs here are the slides.

Is a teaching tool (or it has evolved into that over time), it compiles your python into a state machine very closely emulating the cpython compiler. At it's core it's a handwritten implementation of the python compiler in javascript. It allows for asynchronous execution which lets you do:

Without locking up the browser.

Skulpt is the only one that supports asynchronous continuations, it lets you pause the execution of python while it's resolving some asynchronous thing to happen. Making this work:

Skulpt runs at about a tenth of the speed of CPython, when comparing pystone.

I know least about this one maybe @olemis-lang can expand this one. But next to the obvious difference that Brython is py3 and the others py2. Brython is also a transpiler.

Brython doesn't run the pystone benchmark because time.clock isn't implemented, because officially it's a hardware function.

First of all I'm a Brython committer . Nevertheless I'll try to be as impartial as possible for the sake of doing an objective assessment .

The last time I used it Skulpt did not support features like generator expressions . Brython and PyPy.js do so , so at the feature level IMHO the later are superior .

Brython (at this time) is still work in progress . Some modules cannot be imported (e.g. xml.ElementTree ) . Nevertheless this situation is starting to change since we are working towards running the whole CPython test suite in spite of achieving full compatibility with standards (at least when it makes sense) .

PyPy.js has a number of characteristics that follow straightforward from the fact of it being powered by PyPy (JIT compilation , well tested , ...) but I'm not sure of whether it is suitable for running in the browser . This might change as the project evolves .

TODO: I'll try to complement my answer with reliable benchmarks .

Since nobody has mentioned it I thought it was worth it to mention Batavia which implements the Python virtual machine for running precompiled Python bytecode.

I just tried it and, while it's an interesting concept, it is still in early stages as there is little documentation.

In the end it will depend on what you are trying to do. I chose Transcrypt after having a look because it was more pragmatic and better performant, also more recently released/maintained.

This is an updated conference which compares all available options in the market right now:

The speaker is Russell Keith-Magee, who is a well known developer in the area.

Not the answer you're looking for? Browse other questions tagged python browser brython skulpt transcrypt or ask your own question.

21
Is it possible to run python in the web with github.io?
25
Running a python function in BigQuery
0
Running Python on Server and sending results to Client and vice versa
0
making a python interpreter using javascript
1
Python syntax check in ace editor
0
Turning my super simple Python chatbot into a website
-1
Using codemirror to execute code on server

2931
How do you disable browser Autocomplete on web form field / input tag?
5468
How do I merge two dictionaries in a single expression (taking union of dictionaries)?
5186
How to execute a program or call a system command from Python
3847
Difference between staticmethod and classmethod
3114
What is the difference between Python's list methods append and extend?
3159
How to get the current time in Python
2857
How to make function decorators and chain them together?
2839
How do I concatenate two lists in Python?