Is a string an array in VBA that can be iterated through?

Is a string an array in VBA?

For instance, can I iterate through it like I could in C/C++ ?

What would the equivalent be in in VBA? It is not behaving as I would expect. Never actually tried to manipulate many strings before in VBA! :)

Out of curiosity, I compared the two approaches (using Mat's version of Mid, which is faster):

So it seems that the Split approach is somewhat faster.

A VBA string is implemented as a BSTR datatype. More info for this data type can be found here and here.

Mid works to get the nth character in any string, but returns a Variant, which incurs implicit conversion to String.

Use the "strongly-typed" version: Mid$ instead.

A string is an array of bytes, and you can iterate through it if you know your way around two-byte implementations of a string (or Unicode, which is usually 2 bytes per character, but can be more: and it's always going to be 2-Byte if your string originated in VBA).

When I say is, I mean it: there is no need for a type conversion, and this will work just fine:

Note the 'Step 2' in the loop: I'm discarding every other byte, because I know that it's plain-vanilla Latin characters - 'ASCII' text to the uninitiated.

It gets interesting when you have to deal with Arabic and Pinyin text: and you should never assume in a real-world worksheet that you're always going to be dealing with plain-vanilla US ASCII, as I did in that demonstration piece.

For a more comprehensive example, with more detailed explanation, try this from Excellerando:

Writing an Excel range to a csv file: optimisations and unicode compatibility

The Byte-array optimisation is towards the bottom, under this heading:

A VBA implementation of the Adler-32 checksum, running on byte arrays instead of using VBA string-handling.

The underlying nature of a string does not seem to be as widely-known as it should be: it's not a thing that you will use often in your code, but a lot of the problems with Unicode and non-Latin alphabets that people have get easier when they have a deeper understanding of the variables in their code.

I don't think VBA lets you treat a string as an array without converting it.

However, you can use MID to get one character at a time.

Simple answer: no, string is not an object in VBA. You would have to pick it apart on character at the time using the mid and len functions.

It is still possible to create your own custom enumerable string.

Save this code in file with name EnumerableString.cls a import it in VBA Project. 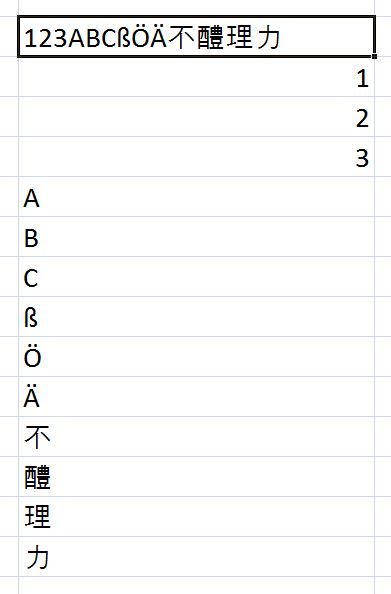 Not the answer you're looking for? Browse other questions tagged arrays vba excel or ask your own question.