I have a problem with the Visual Studio 2015 RC Emulator for Android. The emulator is not starting when I'm starting debugging (F5) nor from "Tools > Visual Studio Emulator for Android...". The process is stuck on "Preparing virtual machine" and there is a "Xde.exe" process with 0% CPU usage in Task Manager. This happens for all virtual machines. Previous emulators (pre-RC) were working just fine.

The necessery APIs (19 and 21) are installed according to SDK manager.

I have tried re-installing Visual Studio and also repairing it but it didn't help.

How can I fix that? 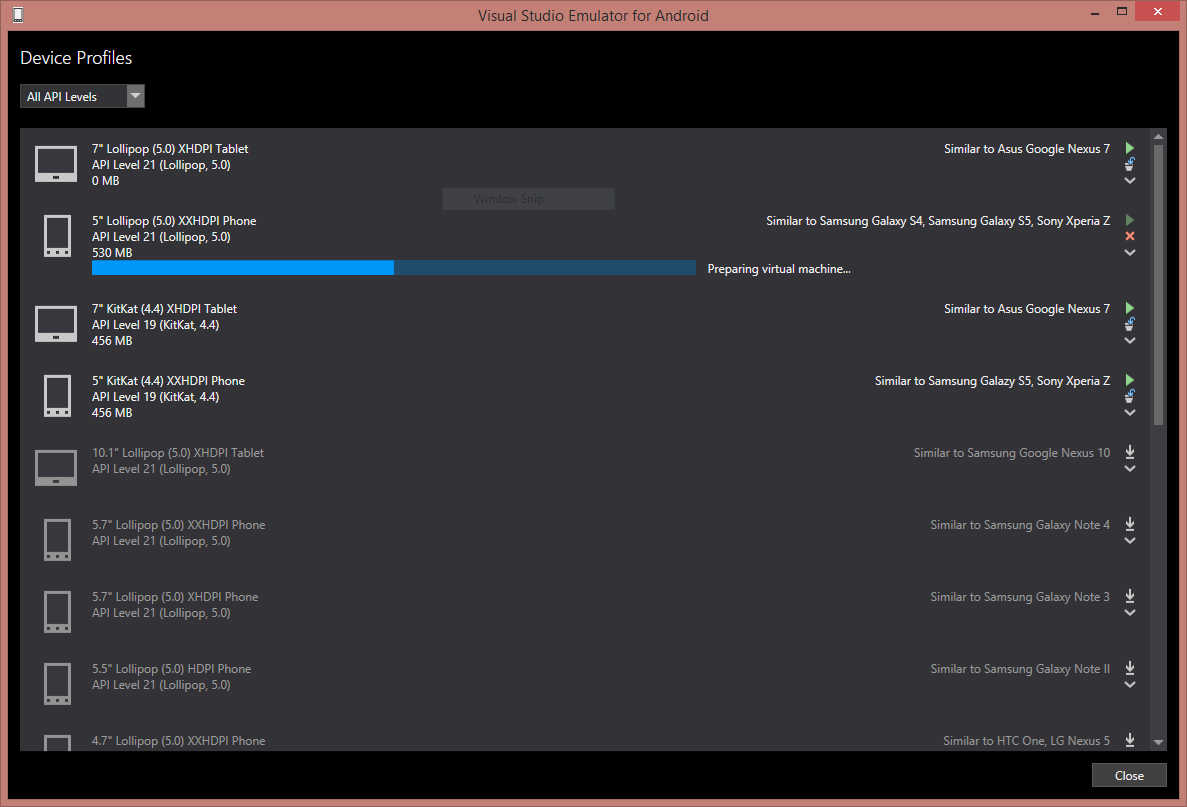 Here are logs: http://pastebin.com/xgyTNkJ9 . The [Critical] The operation was canceled. lines are self explenatory. [Critical] Could not launch 'VS Emulator 5.5" KitKat (4.4) HDPI Phone' device.occured when I killed xde.exe in Task manager.

What's weird is a fact that when I import VHD file from %localappdata%\Microsoft\VisualStudioEmulator\Android\Containers\Local\Devices into Hyper-V manager it works just fine and I can even start it and use it. Unfortunately, I still can't debug application from Visual Studio that way.

So I've reinstalled the Windows on my notebook and same thing happens after installing Visual Studio 2015 RC. So two different hardware, one clean Windows installation and same effect.

This might be a duplicate of Visual studio (2015) emulator for android not working - XDE.exe - Exit Code 3.

I was having the same issue as yourself and this was solved by following the steps provided in this answer: https://stackoverflow.com/a/31698124/1010492.

The key for me was to disable the Network Sharing I had set on my Wi-fi adapter.

You are probably not a member of the Hyper-V Admins group on the computer. Do this:

If the group doesn't exist, you can create it using the PowerShell script in this blog post: http://blogs.msdn.com/b/virtual_pc_guy/archive/2010/09/28/creating-a-hyper-v-administrators-local-group-through-powershell.aspx

It may be that you do not have enough memory available to start the Hyper-V VM. If you go to Hyper-V Manager and attempt to start the emulator image, you'll be able to see if it starts at all or if you don't have enough free RAM on the machine.

I came up with a very genuine solution that can fulfill your basic need of running the emulator. All you need to do is follow these steps:

Not the answer you're looking for? Browse other questions tagged android-emulator hyper-v visual-studio-2015 visual-studio-cordova or ask your own question.