Huge amount of unmanaged memory in IIS Application Pool. Is it normal?

We are trying to find out why our applications hosted in IIS are using up all the RAM on our VMs, and to do that I downloaded some memory profiling tools to experiment with. I first tried JetBrains' dotMemory, but quickly noticed that most of the memory in the application pool process was unmanaged and that dotMemory wasn't being very useful because it deals mostly with managed memory analysis. 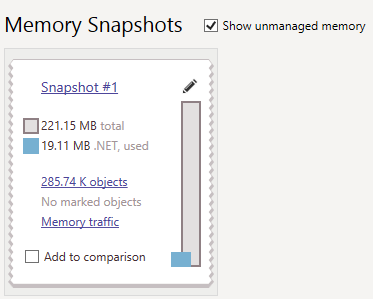 Notice that the pool is using 221MB total, but only 19MB is managed .Net memory.

After toying around with dotMemory, I decided to try out another tool, and found out about ANTS Memory Profiler from RedGate.

ANTS injects something in the application that does consume a lot of that memory it seems, but it still shows some absurd amounts of physical ram being used: 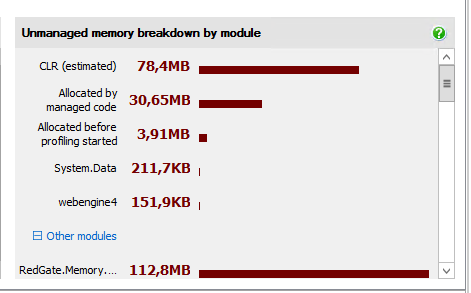 Is this acceptable for a very simple WebAPI project? We started noticing that our VM was hitting 95% to 100% memory usage with a few hosted projects, and this was causing the machine to be very slow. We've tried unifying all 4 applications in the same application pool, but this just yielded pretty much the same results: the total memory usage of the single pool was matching that of all 4 separated ones.

You can see from the graphs that the CLR alone seems to be eating up to 80MB of memory. How can we lower the memory usage of IIS application pools? I've read that changing the pools to x86 mode does reduce a lot of the memory overhead and tried it for a few minutes, resulting in some good reduction to almost half the total ram, but even if I go that way I'd like to know why such simple projects are eating so much RAM on IIS.

We are using one of the more basic Azure VMs with only 1.7GB of RAM, and running these 4 very simple web applications (two MVC websites and two WebAPI projects) is already running the VM to the ground.

For some strange reason, on our local development computers the pools seem to use fewer amounts of RAM too. Also, there doesn't seem to be any memory leaks at all, since taking snapshots at random points always yields the same very high but constant memory usage. We are very careful on the code to always dispose disposable objects and we're using the most severe settings for FxCop with zero problems.

Browse other questions tagged iis memory-management profiling overhead or ask your own question.