What's the difference between Visual Studio Community and other, paid versions?

What's missing in Visual Studio Community 2015? They say it's full-featured and free, but if that's the case, then why do/will they still sell Visual Studio Ultimate 2015 or Visual Studio Enterprise 2015 for 6 grand?

Something is missing in the Community preview, right? And why is it called 'Community'? My code won't be synced across your devices like the new Windows 10 update system is, will it? (Kind of joking about that last part, and kind of not, too).

Check the following: https://www.visualstudio.com/vs/compare/ Visual studio community is free version for students and other academics, individual developers, open-source projects, and small non-enterprise teams (see "Usage" section at bottom of linked page). While VSUltimate is for companies. You also get more things with paid versions!

There are 2 major differences.

Technical, there are 3 major differences:

First and foremost, Community doesn't have TFS support.
You'll just have to use git (arguable whether this constitutes a disadvantage or whether this actually is a good thing).
Note: This is what MS wrote. Actually, you can check-in&out with TFS as normal, if you have a TFS server in the network. You just cannot use Visual Studio as TFS SERVER.

Second, VS Community is severely limited in its testing capability.
Only unit tests. No Performance tests, no load tests, no performance profiling.

Third, VS Community's ability to create Virtual Environments has been severely cut.

On the other hand, syntax highlighting, IntelliSense, Step-Through debugging, GoTo-Definition, Git-Integration and Build/Publish are really all the features I need, and I guess that applies to a lot of developers.

For all other things, there are tools that do the same job faster, better and cheaper.

If you, like me, anyway use git, do unit testing with NUnit, and use Java-Tools to do Load-Testing on Linux plus TeamCity for CI, VS Community is more than sufficient, technically speaking.

The above does not consitute legal advise.
See also:
https://softwareengineering.stackexchange.com/questions/262916/understanding-visual-studio-community-edition-license

Visual Studio Community is same (almost) as professional edition. What differs is that VS community do not have TFS features, and the licensing is different. As stated by @Stefan.

The different versions on VS are compared here - https://www.visualstudio.com/en-us/products/compare-visual-studio-2015-products-vs 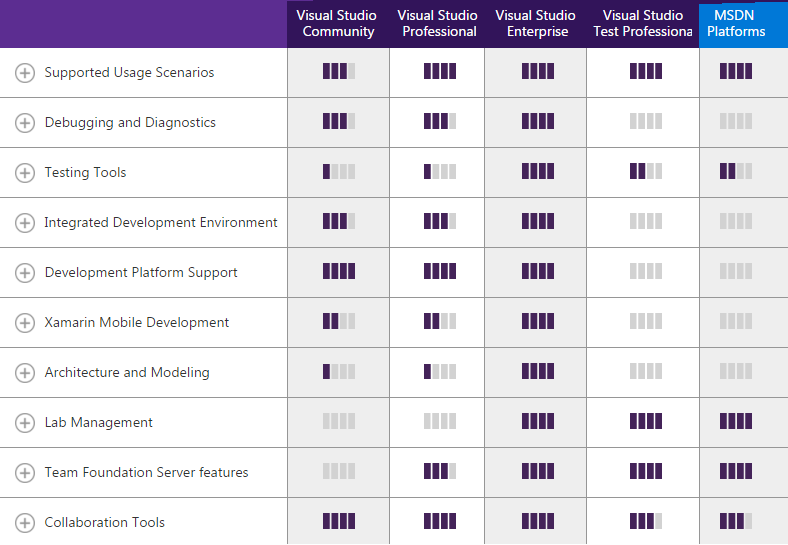 All these answers are partially wrong.

Microsoft has clarified that Community is for ANY USE as long as your revenue is under $1 Million US dollars. That is literally the only difference between Pro and Community. Corporate or free or not, irrelevant.

Even the lack of TFS support is not true. I can verify it is present and works perfectly.

EDIT: Even over the revenue limit, open source is still free.

Not the answer you're looking for? Browse other questions tagged visual-studio or ask your own question.

0
How to use visual studio 2015 or 2017 free?
27
Visual Studio 2017 Upgrade from Community to Enterprise
0
About Vs2019 community or professional or enterprise