I have a large set of 2-dimensional points and want to be able to rapidly query the set for the k-Nearest-Neighbours of any point in the 2-d space. Since it's low-dimensional, a KD-Tree seems like a good way to go about it. My initial data set will only be updated very rarely, so the time to query a point should be more important to me than the build-time. However, each time I run the program I will need to re-load the object, so I also need a structure that can be saved and reloaded swiftly.

The two choices readily available are the KDTree structures in SciPy and in SciKit-learn. Below I profile the two of these for build-speed and query-speed across a large range of list lengths. I also pickle the SciKit-learn structure and show the time to re-load the object from the pickle. These are compared in a graph, and the code used to generate the timings is included below.

As I show in the graph, loading from a pickle is faster than building it from scratch by half an order of magnitude for large N, showing that the KDTree is suitable for my use case (ie. frequent re-loads but infrequent re-builds). 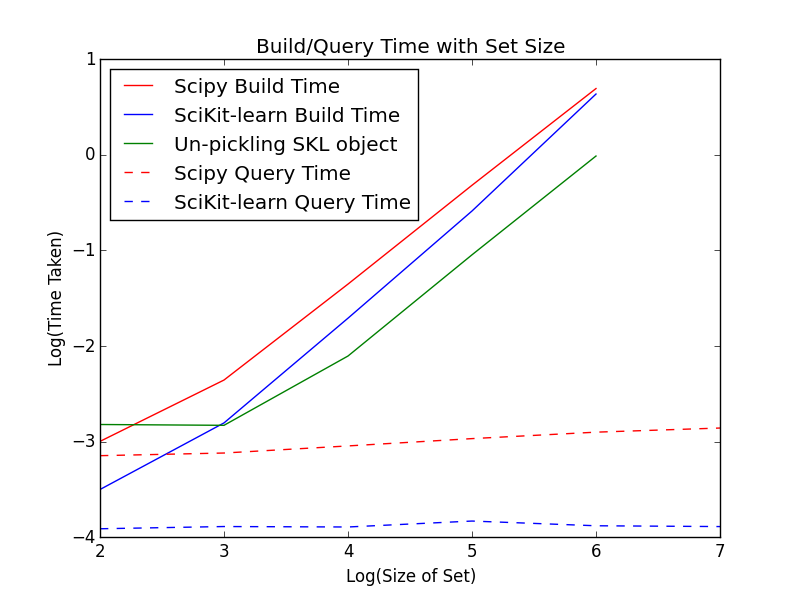 Before I get to answers, I would like to point out that when you have a program that uses a large set of numbers you should always use numpy.array from numpy library to store that kind of data. I don't know what version of Python, scikit-learn, and SciPy are you using, but I am using Python 3.7.3, scikit-learn 0.21.3, and SciPy 1.3.0. When I ran your code to compare build-times, I got AttributeError: 'list' object has no attribute 'size'. This error is saying that list listOfRandom2DPoints has no attribute size. The problem is that sklearn.neighbors.KDTree expects numpy.array which has attribute size. Class scipy.spatial.KDTree works with Python lists but as you can see in the source code of __init__ method of class scipy.spatial.KDTree, first line is self.data = np.asarray(data), which means that data will be converted to numpy.array.

Because of this, I cahanged your lines:

(This change doesn't affect speed comparisons because change is made in setup code.)

Now answers on your questions:

41
How can I pickle a dynamically created nested class in python?
11
Saving KDTree object in Python?
0
Time-efficient way to find connected spheres paths in Python