I was trying to understand the difference between BeanFactoryPostProcessor and BeanPostProcessor.

BeanFactoryPostProcessor is an interface and beans that implement it are actually beans that undergo the Spring lifecycle (Example below) but these beans don't take part of the other declared beans' lifecycle.

Here is a flow diagram that might help to understand the spring bean initialisation life cycle. 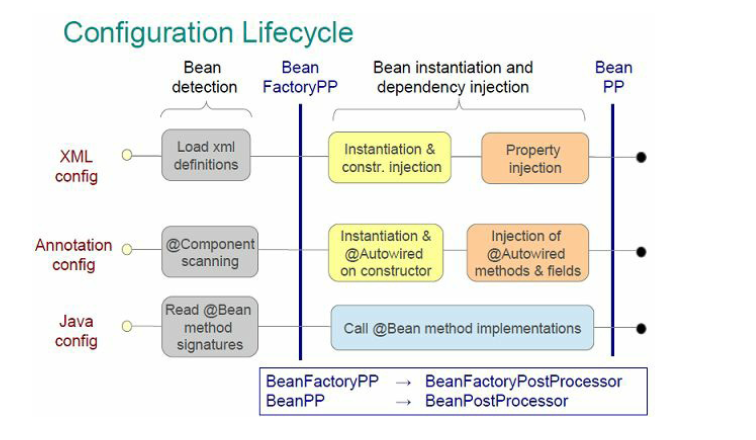 As we can see, the implementation of theBeanFactoryPostProcessor is executed before any spring bean instantiation, contrary to the BeanPostprocessor, where the implemented method will be executed only when the bean is instantiated.

The source image is from the Spring 5 Design Patterns Book.

I pick the explanation from the book:

After loading the bean definitions from all styles of configurations, BeanFactoryPostProcessor comes into the picture to modify the definition of some beans, and then the container instantiates the beans. Finally, BeanPostProcessor works on the beans, and it can modify and change the bean object. This is the initialization phase.

BeanPostprocessor is executed after the bean object is created, as it can be executed before init() and after init().

Used when we want to override XML / annotations, because Spring reads XML / annotations to create the beans. If you want to provide a different configuration to Spring during creation (at run time), then you need to use BFPP. Creating the internal dependency graph is a one time process.

The above step happened only once. It's like creating the "menu" of beans. After creating the bean, if you want to change the bean properties, you can't make any changes to the XML / annotations. Instead, you can use the BPP for bean configuration change after creation. The BPP has 2 execution areas, one before @postconstruct and one after @postconstruct.

You want to place an online food order from Zomato. While ordering online, you give a list of food (XML/annotations) to the restaurant. But, just before the restaurant starts making the food, you call them and ask them to change the dish (BFPP). Now the food is ready to be delivered and you've received it (Bean is created). But you want to make some modifications (like salt or chilly powder), and you can do this before tasting the food (because you know restaurants never put enough salt), or even after tasting the food (this is before and after @postconstruct). Once the taste is good, then the food is ready (the bean is ready to use).

Not the answer you're looking for? Browse other questions tagged java spring or ask your own question.

1930
What is a JavaBean exactly?
13
Spring: How to cleanly terminate prototype-scoped beans?
10
BeanPostProcessor confusion
3
Adding @Transactional to a Bean that's referenced by a BeanPostProcessor
102
How exactly does the Spring BeanPostProcessor work?
1
BeanFactoryPostProcessor modify the actual bean definition instead of the instance?
5
Are the term bean initialisation and instantiation interchangeable
2
Spring Bean lifecycle - @value attributes are null in the constructor