I am making changes to a project in a branch that, so far, is known to no one else but me. However, starting recently, when I git push to this project, I now receive this as part of the response:

I have no idea why Git is giving me this message, which I have never seen before.

Even if I delete the remote branch (with "git push origin :<<my branch>>" I now still get this message! (I successfully deleted the branch on the remote, but the message remains)

Note: These messages can be disabled now. See Jake's answer. Read along my answer for the technical explanation.

Everything that is prefixed by remote: has been sent by the receiving script1 on the server. Bitbucket probably wants to make it easier for you to create a pull request.

1 Example of such a post-receive hook using echo to send a message to the user as explained in the link above. It will be called once all the pushed data is completely saved on the server:

Both standard output and standard error output are forwarded to git send-pack on the other end, so you can simply echo messages for the user.

I think TimWolla is right, but I just wanted to add this post from Atlassian, which clarifies Atlassian's policy:

In Stash 3.3, a feature was added to display a message to users in the terminal with a link to create a pull request when a new branch or branch with no pull requests is pushed. This guide will explain how to turn this feature off.

Currently this feature can only be turned on or off globally. [...]

To turn this feature off, do the following:

TimWolla provided the full explanation, but here is how to get it fixed in the long term: Provide your feedback on this support ticket to show that you share the frustration expressed by other users over this issue.

UPDATE: As of 2016-09-27 this is no longer an issue and Atlassian has provided an official response on the matter.

Here are the instructions for disabling these messages: 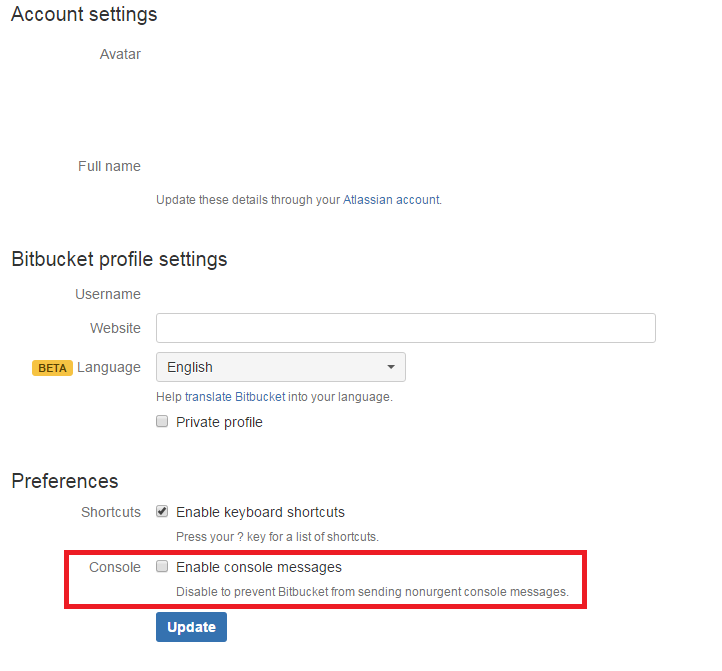 Not the answer you're looking for? Browse other questions tagged git bitbucket githooks git-push or ask your own question.

3902
Delete commits from a branch in Git
4604
Undo a Git merge that hasn't been pushed yet
5393
How to change the URI (URL) for a remote Git repository?
849
Cleaning up old remote git branches
2915
How do you push a tag to a remote repository using Git?
1702
How can I reconcile detached HEAD with master/origin?
1778
Why do I need to do `--set-upstream` all the time?
1813
Remove tracking branches no longer on remote
1196
Git push rejected after feature branch rebase
1077
How do I rename both a Git local and remote branch name?