Microsoft recently released Visual Studio Code and I am a little confused about its usage, since Visual Studio has lot of functional similarities with it.

Visual Studio (free Community edition - since 2015) is a simplified version of the full version and replaces the separated express editions used before 2015.

Visual Studio Code (VSCode) is a cross-platform (Linux, Mac OS, Windows) editor that can be extended with plugins to your needs.

For example, if you want to create an ASP.NET application using Visual Studio Code you need to perform several steps on your own to setup the project. There is a separate tutorial for each OS.

If you really look at it the most obvious difference is that .NET has been split into two:

All native user interface technologies (Windows Presentation Foundation, Windows Forms, etc.) are part of the framework, not the core.

The "Visual" in Visual Studio (from Visual Basic) was largely synonymous with visual UI (drag & drop WYSIWYG) design, so in that sense, Visual Studio Code is Visual Studio without the Visual!

The second most obvious difference is that Visual Studio tends to be oriented around projects & solutions.

Complementing the previous answers, one big difference between both is that Visual Studio Code comes in a so called "portable" version that does not require full administrative permissions to run on Windows and can be placed in a removable drive for convenience.

In short if you're a VS for Unity3D user,

and you're going to try VSCode...

If I'm not mistaken, there is no reason whatsoever to use VS with Unity.

Unity is an IDE so you just need a text editor, and that is what VSCode is. VSCode is hugely better in both speed and preferences. The only possible problem - multiple-windows are a bit clunky in VSCode!

That horrible "double copy" problem in VS ... solved!

If you are using VS with Unity. There is an infuriating problem where often VS will try to open twice, that is you will end up with two or more copies of VS running. Nobody has ever been able to fix this or figure out what the hell causes it. Fortunately, this problem never happens with VSCode.

There are no installers, etc etc etc. On the download page, you download a zipped Mac app. Put it in the Applications folder and you're done.

Bizarrely there's no menu entry / docu whatsoever for folding, but here are the keys:

Setting colors and so on in VSCode - the critical tips

Particularly for Mac users who may find the colors strange:

To keep the "Explorer" list of files on the left tidy, in the Unity case: 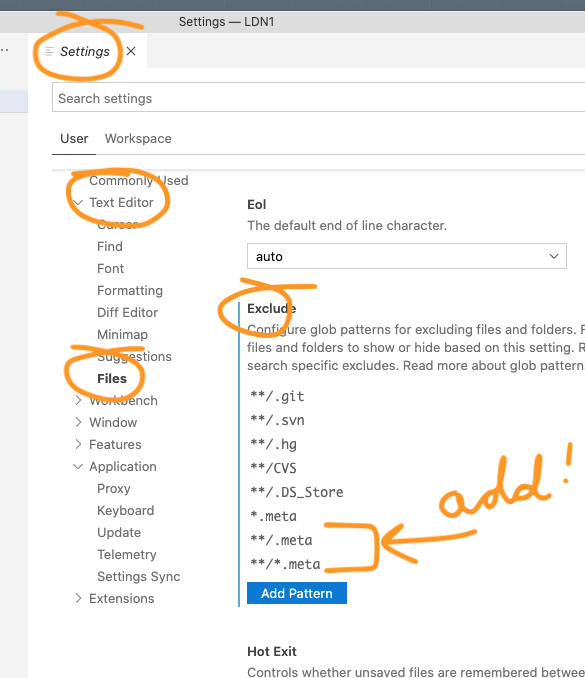 Out of the box, Visual Studio can compile, run and debug programs.

Out of the box, Visual Studio Code can do practically nothing but open and edit text files. It can be extended to compile, run, and debug, but you will need to install other software. It's a PITA.

If you're looking for a Notepad replacement, Visual Studio Code is your man.

If you want to develop and debug code without fiddling for days with settings and installing stuff, then Visual Studio is your man.

As of 2021 I believe the main differences are:

Visual Studio Code is integrated with a command prompt / terminal, hence it will be handy when there is switching between IDE and terminal / command prompt required, for example: connecting to Linux.

Visual Studio Code is for more of a pure code development tool while VS2019/VS2017 etc. is for more of a non-coding approach for developing programs. In VS you while get button tools and window toolbar tools and all that fancy stuff. In VSC you have to code the whole thing from scratch. I recommend VSC for people who are just learning to code but VS for advanced devs.

It's worth mentioning that VSCode promotes (Microsoft's) TypeScript compiler, and bundles first-class support for the language, which makes the editor web-centric, while Visual Studio is primarily used for Microsoft's native, C-family, Windows/XBox stuff.

Not the answer you're looking for? Browse other questions tagged visual-studio visual-studio-code or ask your own question.