I'm trying to implement "Measure Distance" in google maps v3, something like what we can do in Google Maps Web. 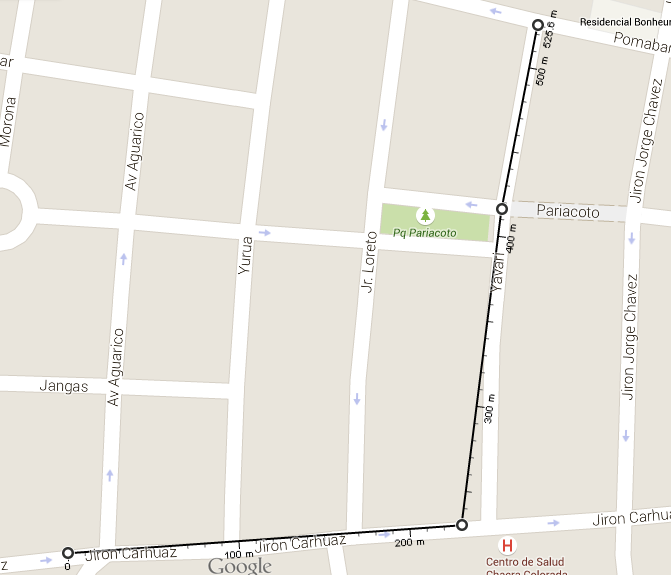 I wonder if there is a library that implmente this as a drawingMode of DrawingManager.

javascript google-maps google-maps-api-3
Share
Improve this question
asked May 29 '15 at 15:07

You can now use this MeasureTool library for Google Maps JavaScript API v3 to do similar to what Google Maps offers.

Here is a live demo.

Here's an example I found of a simple ruler that measures distance between two markers:

The source code is available via a link on that page.

I hope to use the same basic idea in my own Topographic Maps to drag out a series of markers, then use the resulting PolyLine to draw an elevation profile, etc. I'll post a reference to my code here if I'm successful.

That said, since this "Measure distance" UI has been part of the standard desktop Google Maps since July 2014, I would hope that the Google team might share it via the published Google Maps API soon, simplifying our work (not to mention standardizing the UI for such user drawn paths).

Not the answer you're looking for? Browse other questions tagged javascript google-maps google-maps-api-3 or ask your own question.

1611
JavaScript post request like a form submit
1419
What is the best way to add options to a select from a JavaScript object with jQuery?
7104
var functionName = function() {} vs function functionName() {}
2669
Storing Objects in HTML5 localStorage
4211
Why does Google prepend while(1); to their JSON responses?
2309
Open a URL in a new tab (and not a new window)
2194
How to decide when to use Node.js?
1447
Loop inside React JSX