Here, I have our commit log from my repo. You can see the "Merge branch...into..." commits, and after that commit, the branch was merged.

I need to delete that merge commit, but not discard the changes. Default rebasing doesn't show those merge commits. 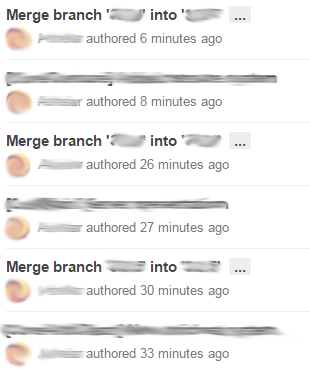 If you want to apply the changes of the commits without including the merge commit (which as Roland Smith pointed out is generally considered bad practice) you can use git rebase with the following workflow:

That's all there is to it. After you do this, the commits on dev that were branched off of master should now be upstream to the pre-merge commit above.

NOTE: Running rebase will permanently update the commit history for the changed branches. For safety, I recommend taking 1 of 2 methods:

7070
How to remove local (untracked) files from the current Git working tree
12245
What is the difference between 'git pull' and 'git fetch'?
9377
How do I undo 'git add' before commit?
21912
How do I undo the most recent local commits in Git?
3182
Remove a file from a Git repository without deleting it from the local filesystem
17464
How do I delete a Git branch locally and remotely?
4176
How to change the URI (URL) for a remote Git repository?
7626
How do I revert a Git repository to a previous commit?
2230
What is the best (and safest) way to merge a Git branch into master?
8982
How do I rename a local Git branch?