Class is implemented in both. One of the two will be used

I have a project that has a dependency (installed via CocoaPods) using SocketRocket and have imported a static library from HeapAnalytics. Apparently the HeapAnalytics library already uses SocketRocket. I get no errors when compiling, but at runtime receive the following:

I'm not sure how to handle it because most solutions I've seen require compiling the static library yourself change class names and such, and I don't have access to the source.

I wrote that error message!•

Either change the class name or don't link against said library.

How is your project configured? Is there anywhere where you explicitly link against SR? Or is it a product of linking against two static libraries that both already include SR?

If the former, then stop linking against SR directly and just inherit the version that came with the library already using it (warning: make sure it has the right version).

If the latter, then you are going to have to modify one of the libraries.

• Actually, I modified the error. It used to imply that one or the other would be used. But that wasn't really what was going on and the behavior was different across different platforms. Thus, it was changed so that it was far more precise in identifying that the behavior was undefined.

In my case this error appeared when I unnecessarily added a source file to both my main app target and my test target: 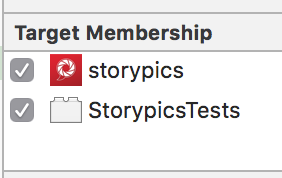 Removing the test target from Target Membership solved it: 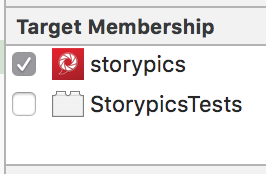 The error suggests that the same symbol / class is defined twice.

I faced the same issue twice, once it was duplicate frameworks and the other time resetting simulator helped.

I had this warning for more than a month, then I finally tried this and it worked for me:

1
Class is implemented in both, One of the two will be used. Which one is undefined. (not cocoapods problem)
1
Dynamic framework with third party library
0
App dependeing on CocoaPod distributing as xcframework with its own dependencies crashes on startup with dyld error even if I use post install script
1
Class is implemented in both when running IOS simulator
0
Xamarin iOS app crashes with +[MSAppDelegateForwarder addAppDelegateSelectorToSwizzle:]: unrecognized selector sent to class