Here is the docker info

How can I increase the memory? Where are the system configurations stored?

When I got rid of all the images and containers it did free some space and the image build ran longer before failing with the same error. So the question is, which space is this referring to and how do I configure it?

The current best practice is:

Note the output from this command prior to accepting the consequences:

In other words, continuing with this command is permanent. Keep in mind that best practice is to treat stopped containers as ephemeral i.e. you should be designing your work with Docker to not keep these stopped containers around. You may want to consider using the --rm flag at runtime if you are not actively debugging your containers.

Make sure you read this answer, re: Volumes

You may also be interested in this answer, if docker system prune does not work for you.

I had the same error and solve it this way:

Check that you have free space on /var as this is where Docker stores the image files by default (in /var/lib/docker).

Next change the storage location with a -g option on the docker daemon or by editing /etc/default/docker and adding the -g option to DOCKER_OPTS. -g specifies the location of the "Docker runtime" which is basically all the stuff that Docker creates as you build images and run containers. Choose a location with plenty of space as the disk space used will tend to grow over time. If you edit /etc/default/docker, you will need to restart the docker daemon for the change to take effect.

Now you should be able to create a new image (or pull one from Docker Hub) and you should see a bunch of files getting created in the directory you specified with the -g option.

helps, but with Docker 17.06.1 and later without pruning unused volumes. Since Docker 17.06.1, the following command prunes volumes, too:

From the Docker documentation: https://docs.docker.com/config/pruning/

If you want to prune volumes and keep images and containers:

What actually fixed the root issue was deleting the Docker.raw file that Docker for Mac uses for storage, and restarting it.

*this is for version 2.2.0.5, but on older versions it should be similar

On newer versions of Docker for Mac**, it shows you the actual size of that file on disk right there in the UI, as well as its max allocated size. You'll probably see that it is massive. For example on my machine it was 41GB!

**On older versions, it doesn't show you the actual disk usage in the UI, and MacOS Finder always shows the file size as the max allocated size. You can check the actual size on disk by opening the directory in a terminal and running du -h Docker.raw

I deleted Docker.raw, restarted Docker for Mac, and the file was automatically created again and was back to being 0GB.

Everything continued to work as before, though of course I had lost my Docker cache. As expected, after running a few Docker commands the file started to fill up again with a few GB of stuff, but nowhere near 41GB.

A few months later, my Docker.raw filled back up again to a similar size. So this method did work, but has to repeated every few months. For me that's fine.

A note on why this works - I have to assume it's a bug in Docker for Mac. It really seems like docker system prune / docker system prune --volumes should entirely clear the contents of this file, but it appears the file accumulates other stuff that can't be deleted by these commands. Anyway, deleting it manually solves the problem!

to remove all unused containers, volumes, networks and images at once (https://docs.docker.com/engine/reference/commandline/system_prune/):

if it's not enough, one can remove running containers first:

increasing /var/lib/docker or using another location with more space is also a good alternative to get rid of this error (see How to change the docker image installation directory?)

If it's just a test installation of Docker (ie not production) and you don't care about doing a nuclear clean, you can:

Again, I use this in my ec2 instances when developing Docker, not in any serious QA or Production path. The great thing is that if you have your Dockerfile(s), it's easy to rebuild and or docker pull.

If you're using Docker Desktop, you can increase Disk image size in Advanced Settings by going to Docker's Preferences.

Here is the screenshot from macOS:

I also encountered this issue on RHEL machine. I did not find any apt solution anywhere on stack-overflow and docker-hub community. If you are facing this issue even after below command:

The solution which worked finally:

Docker leaves dangling images around that can take up your space. To clean up after Docker, run the following:

or with older versions of Docker:

This will remove exited and dangling images, which hopefully clears out device space.

I went to the docker settings and changed the image space available. It reached the limit while creating the new image with docker build. So I just increased the amount available. 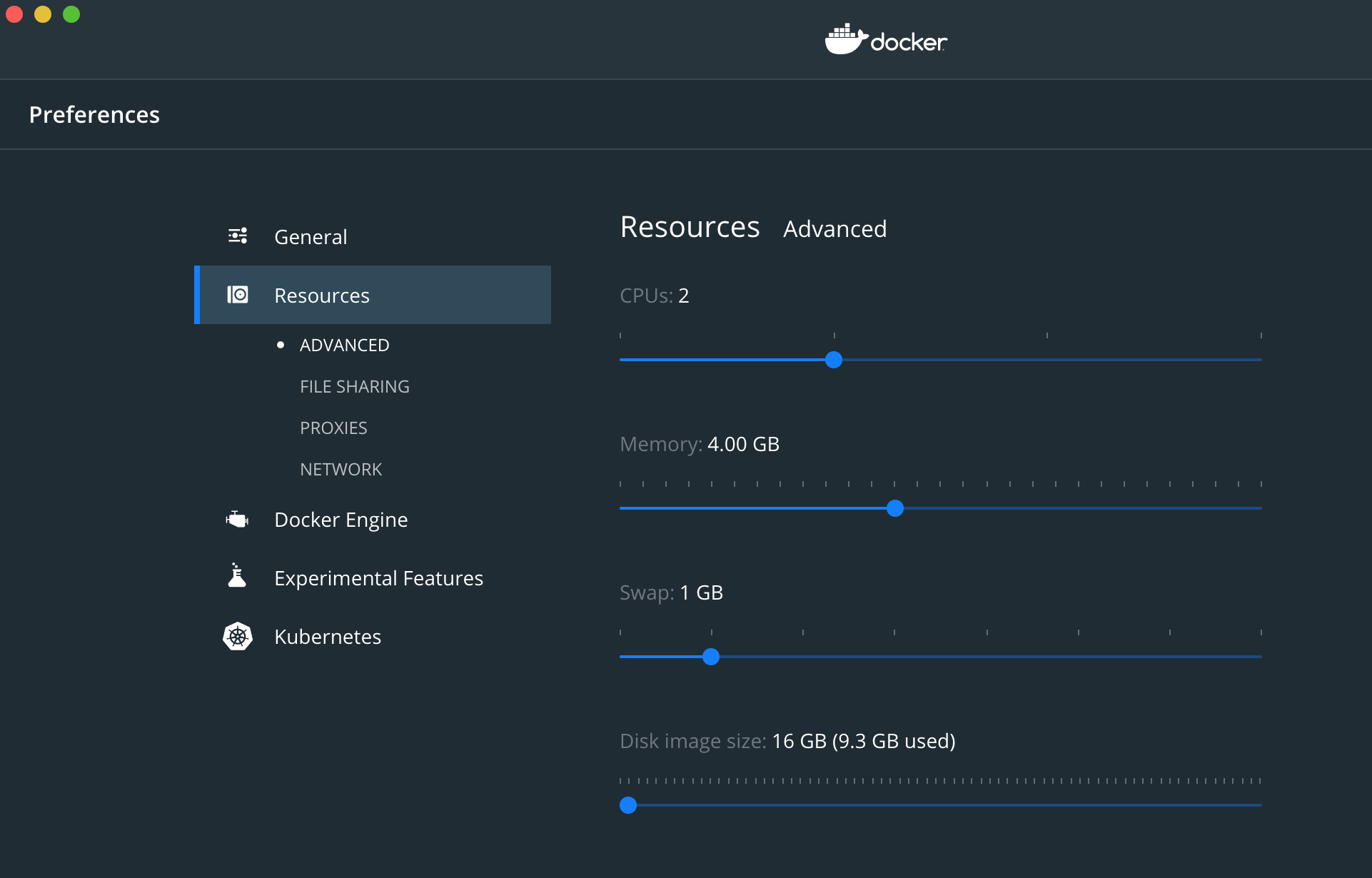 Below are the commands executed in order.

In my case I didn't have so many images/containers, but the build cache was filling up my Docker Disk.

You can see that this is the problem by running

The command below solves that issue

Instead of perform steps 1 and 2 you can do:

This command will remove:

you can also use:

or for just volumes:

If you already have clean the unused containers, images with

Make sure to check if you have unhealthy containers. They can act really in a weird and unpredictable way. In my case because of those, I got this error, even having tons of disk space.

You will need to restart the docker daemon.

In my case installation of ubuntu-server 18.04.1 [for some weird reason] created an LVM logical volume with just 4GBs in size instead of 750GBs. Therefore when pulling images i would get this "no space left on device" error. The fix is simple:

Don't just run the docker prune command. It will delete all the docker networks, containers, and images. So you might end up losing the important data as well.

The error shows that "No space left on device" so we just need to free up some space.

The easiest way to free some space is to remove dangling images.

When the old created images are not being used those images are referred to as dangling images or there are some cache images as well which you can remove.

Use the below commands. To list all dangling images image id.

to remove the images by image id.

This way you can free up some space and start hacking with docker again :)

Your cgroups have the cpuset controller enabled. This controller is mostly useful in NUMA environment where it allows to finely specify which CPU/memory bank your tasks are allowed to run.

By default the mandatory cpuset.mems and cpuset.cpus are not set which means that there is "no space left" for your task, hence the error.

The easiest way to fix this is to enable cgroup.clone_children to 1 in the root cgroup. In your case, it should be

It will basically instruct the system to automatically initialize container's cpuset.mems and cpuset.cpus from their parent cgroup.

When you do a docker import or add a new image, the image gets copied into the /mnt/sda1 which might have become full.

One way to check what space you have available in the image, is to ssh into the vm and run df -h and check the remaining space in /mnt/sda1

Once you are sure that it is indeed a space issue, you can either clean up according to the instructions in some of the answers on this question, or you may choose to resize the boot2docker image itself, by increasing the space on /mnt/sda1

You can follow the instructions here to do the resizing of the image https://gist.github.com/joost/a7cfa7b741d9d39c1307

I run the below commands.

There is no need to rebuilt images afterwards.

Its may be due to the default storage space set to 40GB ( default path , /var/lib/docker)

you can change the storage volume to point to different path

So many posts about prune statements. As it is true this command will clean up docker files, it does not fix your system if the actual storage is encumbered. For me the problem was the server's storage was just plain full. Therefore I had two options.

Seems like there are a few ways this can occur. The issue I had was that the docker disk image had hit its maximum size (Docker Whale -> Preferences -> Disk if you want to view what size that is in OSX).

I upped the limit and and was good to go. I'm sure cleaning up unused images would work as well.

For me docker system prune did the trick. I`m running mac os.

In my case, this was happening because I was exceeding the Docker image size limit of 10Gb. It appears this has been somewhat mitigated and there's a way to increase the limit to 100Gb (https://github.com/moby/moby/issues/5151), but I'm not sure how -- for my use-case, it was fine to switch to a mapped volume, which has better performance anyways.

appears to be better option with latest version

I just ran into this. I'm on Ubuntu 20.04. What worked? Reinstalling Docker:

A bit crude, I know. I tried pruning Docker, but it still would not work.

Not the answer you're looking for? Browse other questions tagged ubuntu memory docker temp or ask your own question.