It seems there are already quite some questions here about relative import in python 3, but after going through many of them I still didn't find the answer for my issue. so here is the question.

I have a package shown below

and I have a single line in test.py:

now, I am in the folder of package, and I run

but if I am in the parent folder of package, e.g., I run:

Now my question is: when I am in the folder of package, and I run the module inside the test_A sub-package as test_A.test, based on my understanding, ..A goes up only one level, which is still within the package folder, why it gives message saying beyond top-level package. What is exactly the reason that causes this error message?

EDIT: There are better/more coherent answers to this question in other questions:

Why doesn't it work? It's because python doesn't record where a package was loaded from. So when you do python -m test_A.test, it basically just discards the knowledge that test_A.test is actually stored in package (i.e. package is not considered a package). Attempting from ..A import foo is trying to access information it doesn't have any more (i.e. sibling directories of a loaded location). It's conceptually similar to allowing from ..os import path in a file in math. This would be bad because you want the packages to be distinct. If they need to use something from another package, then they should refer to them globally with from os import path and let python work out where that is with $PATH and $PYTHONPATH.

When you use python -m package.test_A.test, then using from ..A import foo resolves just fine because it kept track of what's in package and you're just accessing a child directory of a loaded location.

Why doesn't python consider the current working directory to be a package? NO CLUE, but gosh it would be useful.

Try this. Worked for me.

Assumption:
If you are in the package directory, A and test_A are separate packages.

Conclusion:
..A imports are only allowed within a package.

Further notes:
Making the relative imports only available within packages is useful if you want to force that packages can be placed on any path located on sys.path.

Am I the only one who thinks that this is insane!? Why in the world is the current working directory not considered to be a package? – Multihunter

The current working directory is usually located in sys.path. So, all files there are importable. This is behavior since Python 2 when packages did not yet exist. Making the running directory a package would allow imports of modules as "import .A" and as "import A" which then would be two different modules. Maybe this is an inconsistency to consider.

None of these solutions worked for me in 3.6, with a folder structure like:

My goal was to import from module1 into module2. What finally worked for me was, oddly enough:

Note the single dot as opposed to the two-dot solutions mentioned so far.

Edit: The following helped clarify this for me:

In my case, the working directory was (unexpectedly) the root of the project.

This is very tricky in Python.

I'll first comment on why you're having that problem and then I will mention two possible solutions.

You must take this paragraph from the Python documentation into consideration:

And also the following from PEP 328:

Relative imports work from the filename (__name__ attribute), which can take two values:

You can then have like a root file in the root directory which calls test.py:

A) One way to solve this is to have a root file (in the root directory) which calls the modules/packages, like this: 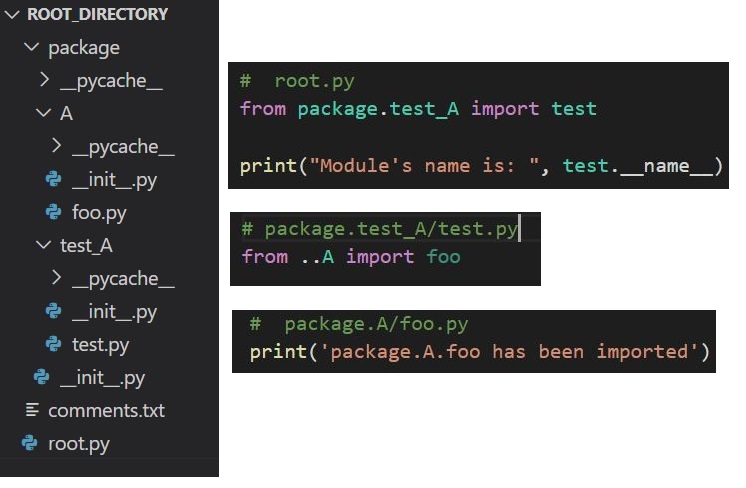 B) If you want to execute the code as a module and not as a top-level script, you can try this from the command line:

Any suggestions are welcomed.

You should also check: Relative imports for the billionth time , specially BrenBarn's answer.

I think it's clearer than

As the most popular answer suggests, basically its because your PYTHONPATH or sys.path includes . but not your path to your package. And the relative import is relative to your current working directory, not the file where the import happens; oddly.

You could fix this by first changing your relative import to absolute and then either starting it with:

OR forcing the python path when called this way, because:

That means that in test.py you could use your absolute import semi-protected in the main case condition and also do some one-time Python path manipulation:

Edit: 2020-05-08: Is seems the website I quoted is no longer controlled by the person who wrote the advice, so I'm removing the link to the site. Thanks for letting me know baxx.

If someone's still struggling a bit after the great answers already provided, I found advice on a website that no longer is available.

Essential quote from the site I mentioned:

"The same can be specified programmatically in this way:

Of course the code above must be written before the other import statement.

It's pretty obvious that it has to be this way, thinking on it after the fact. I was trying to use the sys.path.append('..') in my tests, but ran into the issue posted by OP. By adding the import and sys.path defintion before my other imports, I was able to solve the problem.

This is actually a lot simpler than what other answers make it out to be.

TL;DR: Import A directly instead of attempting a relative import.

The current working directory is not a package, unless you import the folder package from a different folder. So the behavior of your package will work fine if you intend it to be imported by other applications. What's not working is the tests...

Without changing anything in your directory structure, all that needs to be changed is how test.py imports foo.py.

Now running python -m test_A.test from the package directory will run without an ImportError.

Why does that work?

Your current working directory is not a package, but it is added to the path. Therefore you can import folder A and its contents directly. It is the same reason you can import any other package that you have installed... they're all included in your path.

if you have an __init__.py in an upper folder, you can initialize the import as import file/path as alias in that init file. Then you can use it on lower scripts as:

In my case, I had to change to this: Solution 1(more better which depend on current py file path. Easy to deploy) Use pathlib.Path.parents make code cleaner

Just remove .. in test.py For me pytest works fine with that
Example:

In my humble opinion, I understand this question in this way:

Furthermore, we can use full-qualified module name(FQMN) to inspect this problem.

Check FQMN in each case:

[2022-07-19] I think this "relative-import" limitation is quite an ugly design, totally against (one of) Python's motto "Simple is better than complex".

Not sure in python 2.x but in python 3.6, assuming you are trying to run the whole suite, you just have to use -t

One could for example use:

And still import the my_module.my_class without major dramas.

when importing A/ from test_A/

0
Python 3 module import error from another folder
0
Can someone please explain why python relative imports aren't intuitive?
968
Importing modules from parent folder
1125
How do I import other Python files?
1444
Relative imports for the billionth time
811
How to fix "Attempted relative import in non-package" even with __init__.py
592
How to do relative imports in Python?
335
Sibling package imports
159
How to get the parent dir location
180
Can anyone explain python's relative imports?
See more linked questions