I'm trying to use React native and I am getting an error in xcode that says "Lexical or preprocessor error 'RTCRootView.h' not found." I have checked and this file is in the framework folder and I have tried moving it into the project as well and still have not been able to eliminate the error and successfully build.

In the example directory, run npm install to install the dependencies. Then, open swipeoutExample.xcodeproj and run.

react-native-swipeout has been updated to use the latest react-native including ./ios and ./android directories.

Running npm install might work for some people, but it didn't work for me.

What worked for me was in XCode > Product > Clean 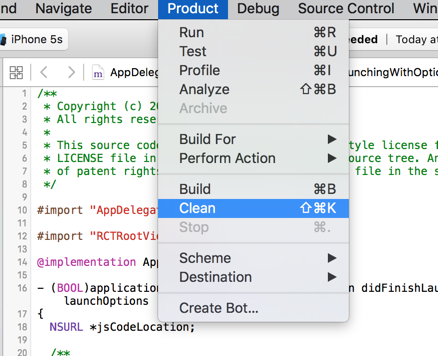 Sometimes it might be because the node_modules folder is missing in your project directory.

Just faced with the same error. In my case it was because of typing error. I replaced RTCRootView.h with RCTRootView.h (RCT is an abbreviation of ReaCT).

Not the answer you're looking for? Browse other questions tagged objective-c xcode react-native or ask your own question.