Flexbox: how to get divs to fill up 100% of the container width without wrapping?

I'm in the process of updating an old inline-block-based grid model I have to a newer Flexbox one I created. Everything has worked fine, apart from one little snag, which has become a bit of a dealbreaker:

I have a bunch of CSS-controlled sliders; so there's a containing wrapper with 100% width, and inside is another div: its width is also 100%, but its white-space is set to nowrap. Using inline-block, this meant that the internal divs (which were also set to 100% width) wouldn't be bound by their parents' constraints and wrap onto the next line - they'd just carry on flowing out of the box. This is exactly what I wanted. However, I cannot get this to work at all with flexbox. For reference, here's an image: 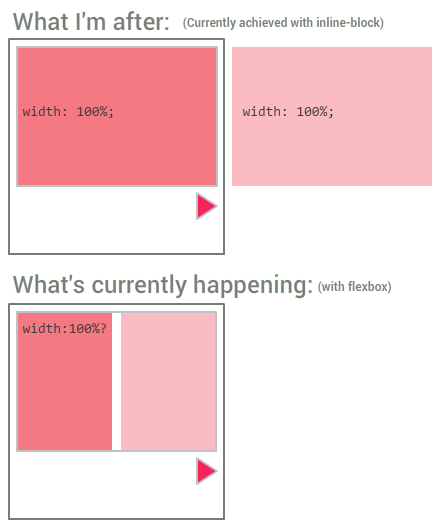 And for reference, here's a jsFiddle of the thing working with inline-block: http://jsfiddle.net/5zzvqx4b/

...and not working with Flexbox: http://jsfiddle.net/5zzvqx4b/1/

I've tried all kinds of variations with flex, flex-basis, flex-wrap, flex-grow, etc. but for the life of me I can't get this to work.

Note that I can force it to do what I want in a hacky, inflexible way by setting the .boxcontainer width to 200%. That works for this single example, but in some cases I won't know beforehand how many child boxes there will be, and I'd rather not resort to inline styling on each element if possible.

To prevent the flex items from shrinking, set the flex shrink factor to 0:

The flex shrink factor determines how much the flex item will shrink relative to the rest of the flex items in the flex container when negative free space is distributed. When omitted, it is set to 1.

You can use the shorthand flex property and set it to

That's flex-grow, flex-shrink, and flex-basis in one line. Flex shrink was described above, flex grow is the opposite, and flex basis is the size of the container.

In my case, just using flex-shrink: 0 didn't work. But adding flex-grow: 1 to it worked.

Not the answer you're looking for? Browse other questions tagged css flexbox or ask your own question.

825
How can I position my div at the bottom of its container?
608
Expand a div to fill the remaining width
2345
How to make a div 100% height of the browser window
593
How can I make Flexbox children 100% height of their parent?
71
How to keep wrapped flex-items the same width as the elements on the previous row?
259
Fill remaining vertical space with CSS using display:flex
246
100% width in React Native Flexbox
266
What are the differences between flex-basis and width?
5
Flexbox wrapping nested rows without media query