I have build.gradle in front of me and there are some dependencies declared as provided but in documentation I do not see this dependency scope.

Is this provided by a plugin? If so how do I found out which plugin this belongs to?

What is the difference between provided and runtime dependency scope in Gradle?

What is provided scope?

Suppose that a jar is needed to compile your code, but the jar is present in the production environment library collection. Then you don't need to package the jar with your project archives. To support this requirement, Maven has a scope named provided. If you declare any jar dependency as provided, then this jar will be present in your classpath during compilation but will not be packaged with your project archive.

There is no Scope defined in Gradle java plugin named provided. Also not in war or android plugins. If you want to use provided scope in your project, then you have to define it in your build.gradle file. Following is the code snippet to declare provided scope in gradle:

What is the difference between provided and runtime dependency scope in Gradle?

During compilation, Gradle will add X into your classpath but will not add Y. Since, Y is not required for compilation. But it will package both X and Y with your project archive since both X and Y are necessary to run your project archive in the production environment. Generally, all the dependencies needed in the production environment are known as runtime dependency.

Now, if you've read this far, then you already know that provided is a compile dependency that we don't want to be present in the runtime dependency (basically, we don't want it to package with the project archive). 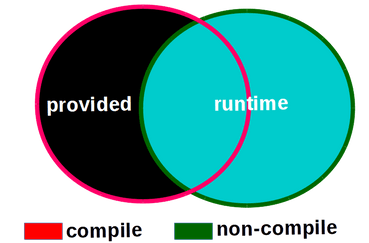 As from gradle 2.12 you can use the compileOnly option.

For further clarification, as of the latest version, Gradle 5.5 has compileOnly (same as provided) and runtimeOnly options. The new default "compile and runtime" option is implementation.

Not the answer you're looking for? Browse other questions tagged java gradle dependency-management or ask your own question.

0
What does the configuration “provided” in build.gradle do?
1
getting 'Could not find or load main class' after adding provided spark .jar dependencies to gradle build
0
Library is not recognized when the apk is generated

2589
How can I create an executable JAR with dependencies using Maven?
871
Differences between dependencyManagement and dependencies in Maven
707
Gradle build without tests
818
How can I force gradle to redownload dependencies?
1375
What is Gradle in Android Studio?
673
How to add local .jar file dependency to build.gradle file?
607
Using gradle to find dependency tree
0
Can gradle use latest.release as default dependency version?
2
Gradle provided dependencies with Intellij
1159
What's the difference between implementation and compile in Gradle?