Why is the graph spiky when using average?

Im using messageInspectors in my WCF service to measure elapsed time on each service method like this :

This is how the counters is registred

The method for setting the performance counter looks like this :

The performance counter does however show spikes instead of average? If I change the view to report everything is 0 as long as I do nothing? I need to be able to see how the calltime average looks like right now even if there is no calls for the moment. What am I doing wrong? 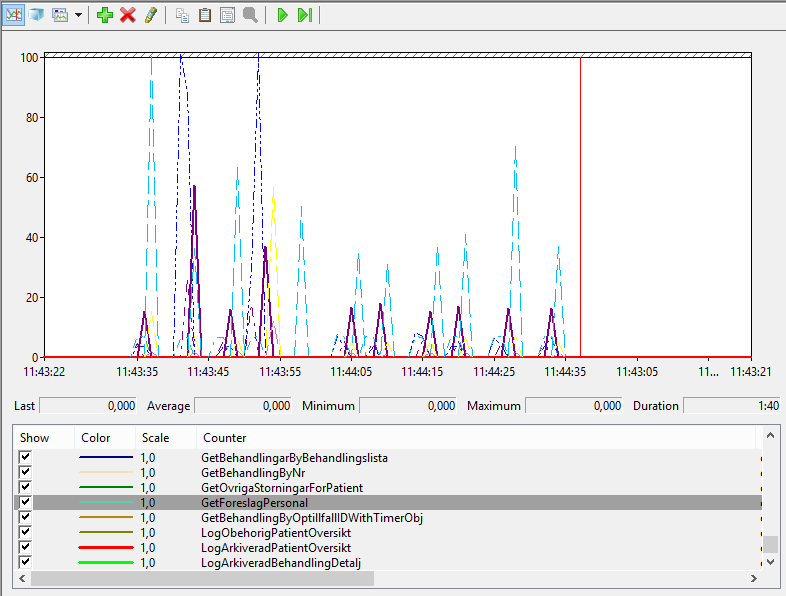 The problem is, that the AverageTimer32 doesn't show some alltime average value. From the documentation:

An average counter that measures the time it takes, on average, to complete a process or operation. Counters of this type display a ratio of the total elapsed time of the sample interval to the number of processes or operations completed during that time. This counter type measures time in ticks of the system clock. Formula: ((N1 - N0)/F)/(B1 - B0), where N1 and N0 are performance counter readings, B1 and B0 are their corresponding AverageBase values, and F is the number of ticks per second.

Maybe it's somehow possible to calculate the value on your own and expose it through some other type of performance counter.

EDIT: I wrote a demo application to demonstrate a workaround, but it feels quite messy. I created an NumberOfItems32 performance counter.

The disadvantage of this solution is obvious. Since the performance counter can only store long you lose the decimal places of your average value. Another workaround for this problem would be to scale your values, for example multiplying them with 10 and then choose an lower scaling in performance monitor.

Not the answer you're looking for? Browse other questions tagged c# .net performance performancecounter performance-monitor or ask your own question.