Reading the JavaDoc of Optional, I bumped in a weird method signature; I never saw in my life:

At first glance, I wondered how the generic exception <X extends Throwable> is even possible, since you can't do that (here, and here). On second thought, this starts to make sense, as it is here just to bind the Supplier... but the supplier itself knows exactly what type it should be, before generics.

But the second line hit me:

And one, not directly related question:

java exception generics
Share
Improve this question
edited May 23 '17 at 12:25

Treat it like any other generic code you've read.

Here's the formal signature from what I see in Java 8's source code:

There is an open bug about the Javadoc being misleading. In this case, it's best to trust the source code as opposed to the documentation until the bug is declared fixed.

As for why we're using throws X instead of throws Throwable: X is guaranteed to be bound to Throwable in the uppermost bounds. If you want a more specific Throwable (runtime, checked, or Error), then merely throwing Throwable wouldn't give you that flexibility.

To your last question:

Will this method be required to be caught in a catch(Throwable t) clause?

Something down the chain has to handle the exception, be that a try...catch block or the JVM itself. Ideally, one would want to create a Supplier bound to an exception that best conveyed their needs. You don't have to (and probably should not) create a catch(Throwable t) for this case; if your Supplier is type bound to a specific exception that you need to handle, then it's best to use that as your catch later up in the chain.

The Javadoc's method signature is different than the source code. According to the b132 source:

Confirmed: This is an issue with the Javadoc generation. As a test, I created a new project and generated Javadoc for the following class:

This is the resulting Javadoc: 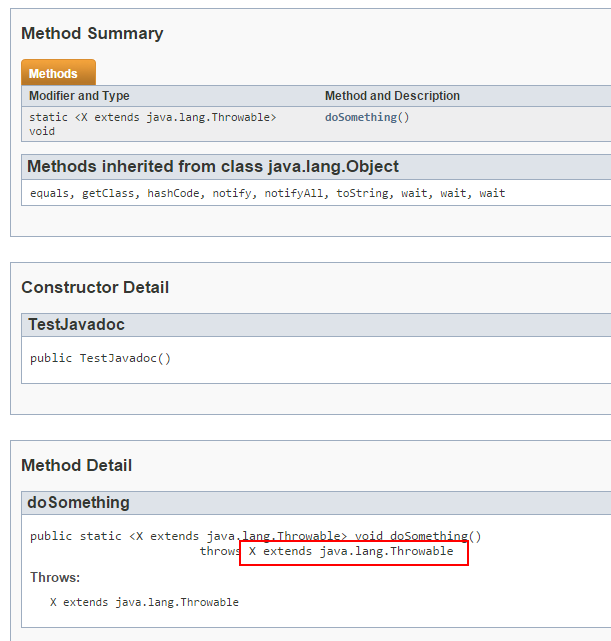 Double confirmed: There is an open bug about the Javadoc for this class

catch and instanceof depend on runtime type information; erasure ruins that.

However, it's a little too harsh to forbid generic declaration of exception types like FooException<T>. Java could allow it; just require that only raw type and wildcard type are allowed in catch

An argument can be made that, the type of an exception is mostly interested by catch clauses; if we cannot catch generic exception types, there's no point of having them in the first place. OK.

Now, we cannot do this either

then why does Java allow X to be thrown in the first place?

As we'll see later, this construct, aided by erasure, could actually subvert the type system.

Well, this feature is quite useful though - at least conceptually. We write generic methods so that we can write template code for unknown input and return types; same logic for throw types! For example

We need to able to throw generically to achieve exception transparency when abstracting a block of code. Another example, say we are tired of writing this kind of boilerplate repeatedly

and we want a wrapper method for that, taking in a lambda for the CODE

The problem is, CODE could throw any exception type; the original boilerplate throws whatever CODE throws; and we want the writeLock() expression to do the same, i.e. exception transparency. Solution -

One serious flaw of the throws X approach is that it doesn't work well with 2 or more exception types.

Another example is CompletableFuture, where exception is a central part of the whole concept; yet, no checked exceptions are allowed either in lambda bodies.

If you are a dreamer, you might believe that in some future version of Java, an elegant mechanism of exception transparency for lambda will be invented, nothing like this ugly throws X hack; therefore we don't need to pollute our APIs with <X>s for now. Yeah, dream on, man.

So, how much is throws X used anyways?

Throughout the entire JDK source, the only public API that does that is Optional.orElseThrow() (and its cousins OptionalInt/Long/Double). That's it.

(There's a shortcoming with the orElseGet/orElseThrow design - the decision of branching cannot be done in the lambda body. We could instead design a more general method

Besides orElseThrow, the only other method in JDK that throws X is the non-public ForkJoinTask.uncheckedThrow(). It is used for "sneaky throw", i.e. a code can throw a checked exception, without the compiler and runtime knowing about it -

here, IOException is thrown from foo() at runtime; yet the compiler and runtime failed to prevent it. Erasure is largely to blame.

There's a difference between generic types and generic variables/parameters.

A generic type is a type that declares a generic parameter. For example

What isn't allowed is a generic type (like above) that also extends Throwable.

This is expressed in the Java Language Specification, here

It is a compile-time error if a generic class is a direct or indirect subclass of Throwable (§11.1.1).

Generic variables themselves, however, can have any bound, generic or otherwise, as long as it is a reference type.

means that whatever type is bound (not has bounds) to X at compile time must be a subtype of Throwable.

X is already bound in the method signature.

X is not bound. The method declares its bounds.

Will this by any means, solve the generic exception restriction?

Why not just extends Throwable, as the rest will be erased by type erasure?

Generics are a compile time feature. Erasure happens after compilation. I believe they could have simply used

as the parameter type. But then you'd lose the type variable for use in the throws clause.

Why not just throws Throwable, as the rest will be erased by type erasure?

You want the throws to use the same Exception type that the Supplier supplies.

Will this method be required to to be caught in a catch(Throwable t) clause?

No/depends. If you bind a checked exception to X, then you'll need to handle it some way. Otherwise, no catch is "required". But something will/should handle it eventually, even if it is the JVM itself.

Not the answer you're looking for? Browse other questions tagged java exception generics or ask your own question.

2847
How do I test a private function or a class that has private methods, fields or inner classes?
869
How do you test that a Python function throws an exception?
2251
Catch multiple exceptions at once?
2072
How do you assert that a certain exception is thrown in JUnit 4 tests?
2185
“implements Runnable” vs “extends Thread” in Java
473
The case against checked exceptions
1394
Proper way to declare custom exceptions in modern Python?
2431
Manually raising (throwing) an exception in Python
3000
Catch multiple exceptions in one line (except block)