What is the difference between a slice and an array?

The fact that &[T; n] can coerce to &[T] is the aspect that makes them tolerable. — Chris Morgan

Why can &[T; n] coerce to &[T]? In what other conditions does this coercion happen?

&[T; n] is purely a reference to that array, represented as a thin pointer to the data.

[T] is a slice, an unsized type; it can only be used through some form of indirection.

&[T], called a slice, is a sized type. It's a fat pointer, represented as a pointer to the first item and the length of the slice.

Arrays thus have their length known at compile time while slice lengths are a runtime matter. Arrays are second class citizens at present in Rust, as it is not possible to form array generics. There are manual implementations of the various traits for [T; 0], [T; 1], &c., typically up to 32; because of this limitation, slices are much more generally useful. The fact that &[T; n] can coerce to &[T] is the aspect that makes them tolerable.

It will coerce when it needs to and at no other times. I can think of two cases:

There are four possible coercions in Rust:

I created this picture according to the answers of kennytm and Chris Morgan. It describes the various concepts: 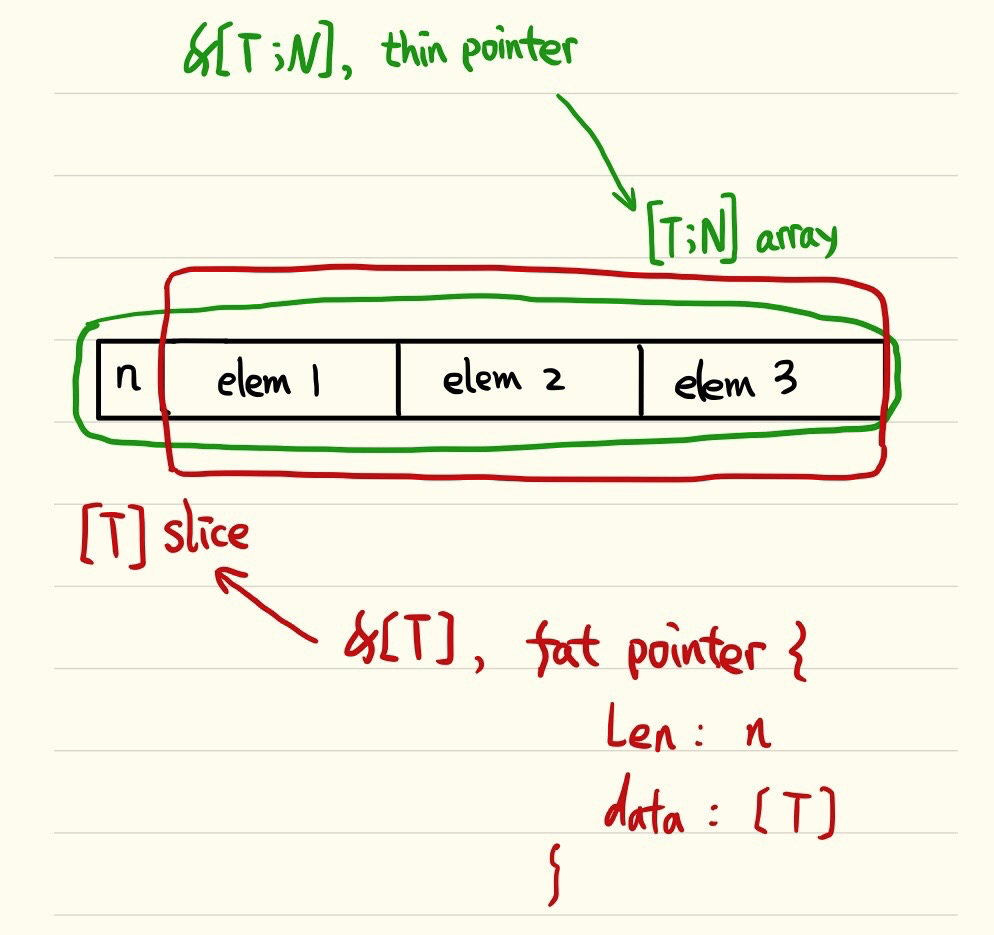 Not the answer you're looking for? Browse other questions tagged arrays rust slice coercion or ask your own question.

3
Why do I get the error E0277: the size for values of type `[{integer}]` cannot be known at compilation time?
1
Why is Rust converting &[&u8; 2] into &[&u8]?
8
What is the difference between a slice and reference in Rust?
6
Why doesn't a nested reference to an array coerce to a slice?
3
Converting a reference of an array of u8 into a <Vec<u8>>
4
How do I append a value at the beginning of an array?
1
How can I fix the error E0277: the trait bound `[usize]: std::marker::Sized` is not satisfied?
1
How can I check, at compile-time, that a slice is a specific size?
0
How to make a string from byte subarray?
0
Does Slice of Array follow a different convention than [T] in Rust?
See more linked questions