All I have in AndroidManifest.xml is:

After uploading the APK to the developer console, it adds two new permissions: 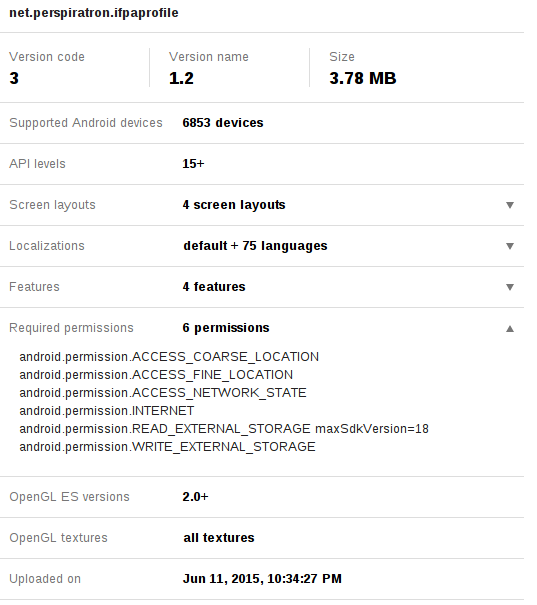 The only thing that I added was play-services-location. Why does this library need it?

Longer answer: Looking at my manifest merger log, it appears that all four of these permissions are being included at the request of play-services-maps, which -location is linking in of its own accord. My app isn't using -maps, just -location.

Further, I've found that this behavior just appeared in version 7.5.0 of play-services-location; prior versions didn't include -maps, and don't add those permissions.

I actually suspect that this connection to play-services-maps is accidental, and will be removed in a future release of GMS.

Following up on the link given by Mark Murphy (CommonsWare), you can remove these permissions from your app by adding the following lines to your manifest:

Note that you'll also need xmlns:tools="http://schemas.android.com/tools" in your opening <manifest ... > element to make these work. And the usual caveats apply: my app worked fine after taking this step, but YMMV.

Update 10 Sep 2015: Mark Murphy (@commonsware) has done an excellent writeup on this issue on his blog, including a discussion of the risks of my solution.

Not the answer you're looking for? Browse other questions tagged android android-studio google-play-services android-permissions or ask your own question.

6164
What is the difference between "px", "dip", "dp" and "sp"?
5
Cannot open layout in Android Studio
12
What does mean "specified for property 'resDir' does not exist."
7
How to display Map on emulator
3
Could not find class 'dalvik.system....'