What's the best way to share files from Windows to Boot2docker VM?

I have make my code ready on Windows, but I find it's not easy to share to boot2docker.

I also find that boot2docker can't persistent my changes. For example, I create a folder, /temp, after I restart boot2docker. This folder disappears, and it's very inconvenient.

What is your way when you have some code on Windows, but you need to dockerize them?

I try to update the setting in VirtualBox and restart boot2docker, but it's not working on my machine. 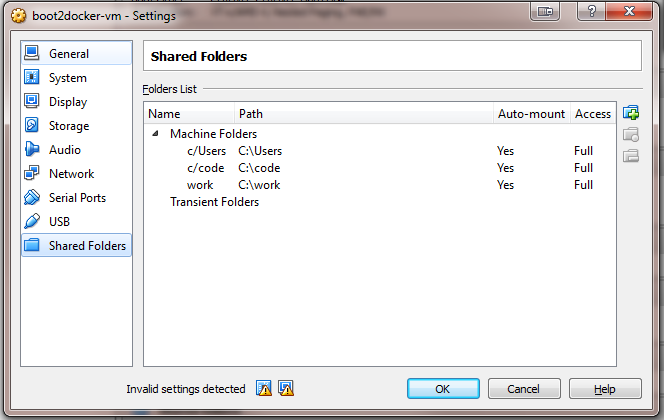 Boot2Docker is a small Linux VM running on VirtualBox. So before you can use your files (from Windows) in Docker (which is running in this VM), you must first share your code with the Boot2Docker VM itself.

To do so, you mount your Windows folder to the VM when it is shutdown (here a VM name of default is assumed):

(Alternatively you can also open the VirtualBox UI and mount the folder to your VM just as you did in your screenshot!)

Now ssh into the Boot2Docker VM for the Docker Quickstart Terminal:

Then perform the mount:

After that, you can access C:/work inside your Boot2Docker VM:

Now that your code is present inside your VM, you can use it with Docker, either by mounting it as a volume to the container:

Or by using it while building your Docker image:

I was able to mount a folder under C:\Users successfully in my container without doing any extra steps such as docker-machine ssh default.

So having your files under C:\Users probably is the simplest thing to do.

If you do not want to have your files under C:\Users, then you have to follow the steps in the accepted answer.

Using Docker Toolbox, the shared directory can only be /c/User:

Invalid directory. Volume directories must be under your Users directory

Step1&Step2 Command in the "Docker Quickstart Terminal" in the implementation of Step1 & Step2 can be:

In the System Tray, you should have the cute Docker whale swimming. Right click and select Settings. 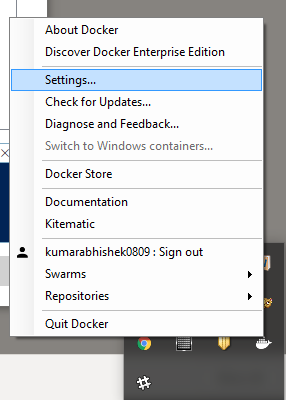 Click on Apply. This will bring up the Credentials dialog and you will need to provide your current Windows credentials. Ensure that you give it correctly. I also suspect that you might need to be an administrator.

To mount our host directory (C:\data) in a container, we are going to use the -v (volume) flag while running the container. A sample run is shown here:

I have CentOS in my local Docker container.

Not the answer you're looking for? Browse other questions tagged docker boot2docker or ask your own question.

8
Windows + Boot2Docker, How to add D:\ drive to be accessible from within docker?
40
How to use --volume option with Docker Toolbox on Windows?
21
Docker: Sharing a volume on Windows with Docker Toolbox
4
How to upload files with RSelenium?
5
A working how-to for data extraction of non-root named volume permissions working with linux and win
1
boot2docker: bootlocal.sh not executing