I downloaded the iOS 9 beta for the iPhone 5s and wanted to test an application that I have finished but now it says that my iPhone is an ineligible device. Is there a way I can still run apps on my iPhone without downloading the Xcode 7 beta?

You can RUN App on iOS 9 device using Xcode 6, But firstly you need to build your app on XCode 7, after that it will support on XCode 6. I dont know the reason. I have checked this on My Mac.

When i have checked iOS9 with Xcode6, Bugs are very less. So i have plan to support iOS9 with XCode6 for quick release. Later i will do for XCode7.

from Xcode 7.1 beta folders to corresponding folder in your Xcode 6.x. After restarting Xcode iOS 9.0/9.1 devices will no longer be marked an ineligible.

If you installed iOS 9 beta onto your iPhone, then you cannot develop on it without Xcode 7.

However, this is not a completely terrible thing; you can readily have both Xcode 7 and Xcode 6 on the same computer.

(What you cannot do, according to Apple, is revert your iPhone back to iOS 8 - but there are some comments below from people who were able to do it.)

Install the latest XCode. Keep both versions on your Mac. Give Keep Both when installing the new XCode and do not give Replace present XCode during the installation.

and copy to the Xcode you are currently working in the same path. Find the screen shots below and start working. 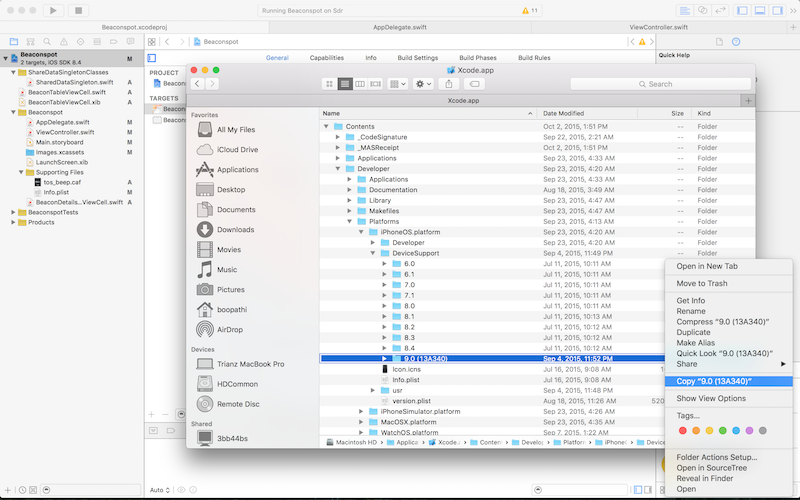 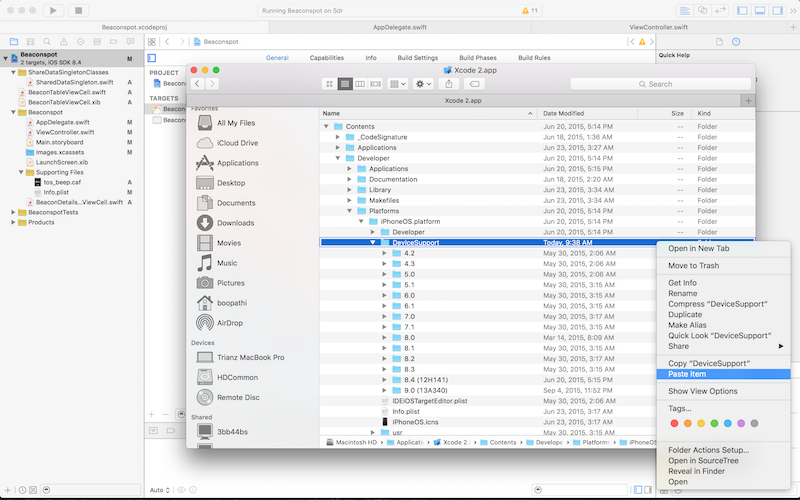 Don't need build your project at Xcode 7.0, just open and select your device, after that, open your Xcode 6.4 and your device will automatically update the necessary things to build app by Xcode 6.4

Not the easiest or correct way. But if you really have to test once or twice in the device.

App will be installed to the ios9 device.

No, you have to download Xcode 7 beta since tools like the compiler and debugger are part of the IDE.

As stated on Apple Developer Website (here), Xcode 7 Beta has the Swift 2 compiler and SDK for iOS 9. My guess is, your current Xcode doesn't know how to compile for iOS 9 SDK.

However, Apple doesn't specifically mention Xcode 7 as a requirement. It states that OS X Yosemite or later is required.

I don't think you can specifically download an SDK that isn't supported inside Xcode. For example, you can go to Xcode -> Preferences -> Downloads and under Components you may see the iOS 9 Simulator.

If you go to the iOS 9 SDK and download it, it seems to only download the device OS and not the entire SDK.

In conclusion, I believe that the SDK "kit" is integrated with Xcode 7 that would allow you to develop on your iOS 9 Device. Without upgrading, I don't see you being able to do that. I could be wrong though.

Not the answer you're looking for? Browse other questions tagged ios xcode ios9 or ask your own question.

468
How do you beta test an iphone app?
1088
How to change the name of an iOS app?
694
Version vs build in Xcode
637
iOS app with framework crashed on device, dyld: Library not loaded, Xcode 6 Beta
633
Xcode 6 Bug: Unknown class in Interface Builder file
785
Xcode process launch failed: Security
901
Xcode error "Could not find Developer Disk Image"
578
The resource could not be loaded because the App Transport Security policy requires the use of a secure connection
470
Fixing Xcode 9 issue: "iPhone is busy: Preparing debugger support for iPhone"
736
Xcode building for iOS Simulator, but linking in an object file built for iOS, for architecture 'arm64'