Ask Question
Asked 10 years, 11 months ago
Active 2 years, 6 months ago
Viewed 3k times
2
It's difficult to tell what is being asked here. This question is ambiguous, vague, incomplete, overly broad, or rhetorical and cannot be reasonably answered in its current form. For help clarifying this question so that it can be reopened, visit the help center.
Closed 10 years ago.

Is there any way that I can optimize this code as to not run out of memory?

The root cause is the tons of String objects you are creating and storing in the toProcess Queue and the antecessor Map. Why are you doing that?

Look at your algorithm. See if you really need to store >2 million nodes and 5 million strings in each.

This was hard to spot because the program is complex. Actually, I didn't even try to understand all of the code. Instead, I used VisualVM – a Java profiler, sampler, and CPU/memory usage monitor. 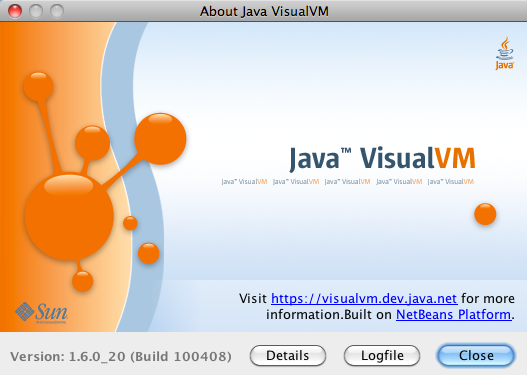 And took a look at the memory usage. The first thing I noticed was the (obvious) fact that you're creating tons of objects.

This is an screenshot of the app: 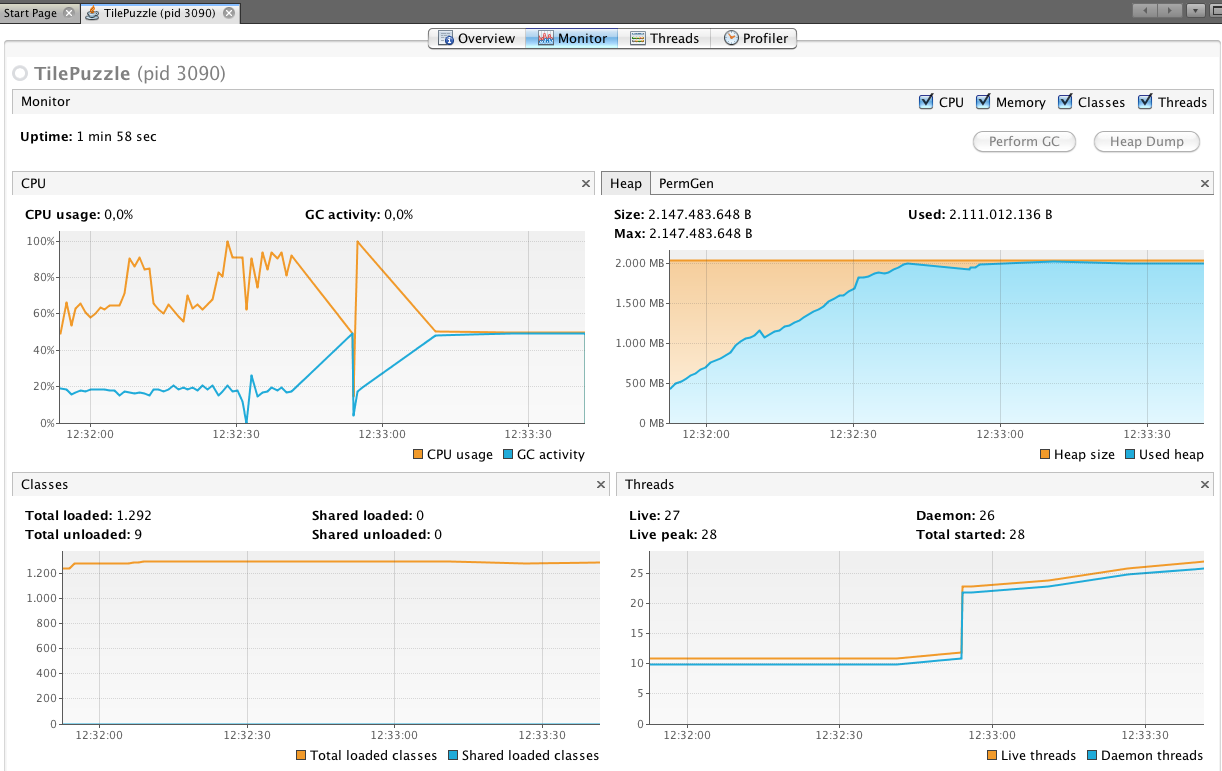 As you can see, the amount of memory used is tremendous. In as few as 40 seconds, 2 GB were consumed and the entire heap was filled.

I initially thought the problem had something to do with the Node class, because even though it implements Comparable, it doesn't implement equals. So I provided the method:

But that was not the problem.

The actual problem turned out to be the one stated at the top.

As previously stated, the real solution is to rethink your algorithm. Whatever else can be done, in the meantime, will only delay the problem.

But workarounds can be useful. One is to reuse the strings you're generating. You're very intensively using the TilePuzzle.toString() method; this ends up creating duplicate strings quite often.

Since you're generating string permutations, you may create many 12345ABCD strings in matter of seconds. If they are the same string, there is no point in creating millions of instances with the same value.

The String.intern() method allows strings to be reused. The doc says:

Returns a canonical representation for the string object.

A pool of strings, initially empty, is maintained privately by the class String.

For a regular application, using String.intern() could be a bad idea because it doesn't let instances be reclaimed by the GC. But in this case, since you're holding the references in your Map and Queue anyway, it makes sense.

So making this change:

Pretty much solves the memory problem.

This is a screenshot after the change: 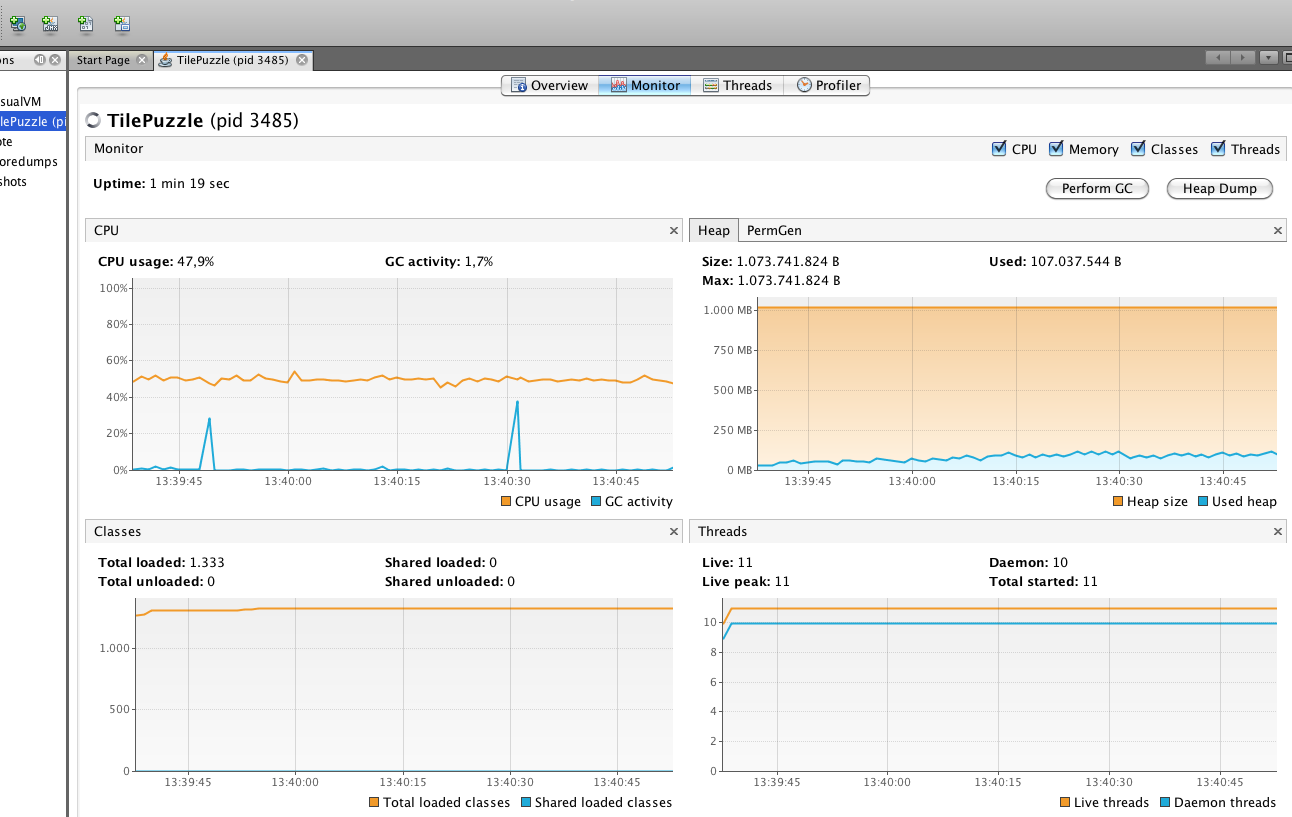 Now, the heap usage doesn't reach 100 MB even after a couple of minutes.

You're using an exception to validate if the movement is valid or not, which is okay; but when you catch them, you're just ignoring them:

If you're not using them anyway, you can save a lot of computation by not creating the exceptions in the first place. Otherwise you're creating millions of unused exceptions.

And use validation instead:

You're creating a new Random object for every new TilePuzzle instance. It would be better if you used just one for the whole program. After all, you are only using a single thread.

The workaround solved the heap memory problem, but created another one involving PermGen. I simply increased the PermGen size, like this:

The output was sometimes 49 and sometimes 50. The matrices were printed like:

Not the answer you're looking for? Browse other questions tagged java puzzle out-of-memory sliding-tile-puzzle or ask your own question.

4
SAP JCo connector loaded forever in GlassFish v2.1 (can't unload)
3
JUnit test of the same object
3
How can I correctly calculate the height of a jTable row to ensure that the contained jLabel containing HTML is entirely displayed?
1
OGNL setValue target is null
3
Lock for JavaME
827
Unfortunately MyApp has stopped. How can I solve this?
2
Spring MVC form validation does't work for nested complex types
19
Hibernate : Why FetchType.LAZY-annotated collection property eagerly loading?
0
How to implement parcelable with my custom class containing Hashmap and SparseArray?