I have a JavaEE project, in which I use message properties files. The encoding of those file is set to UTF-8. In the file I use the german umlauts like ä, ö, ü. The problem is, sometimes those characters are replaced with unicode like \uFFFD\uFFFD, but not for every character. Now, I have a case where ä and ü are both replaced with \uFFFD\uFFFD, but not for every occurring of ä and ü.

Also, there are lines changed, which I have not touched. I don't understand why I get such a behavior. What could be the cause for the above problem?

If I use another Editor like Atom to edit those message properties files, I don't ran into this problem.

By default ISO 8859-1 character encoding is used for Eclipse properties file (read here), so if the file contains any character beyond ISO 8859-1 then it will not be processed as expected.

If you use Eclipse then you will notice that it implicitly converts the special character into \uXXXX equivalent. Try copying

into a properties file opened in Eclipse.

Update the encoding of your Eclipse as shown below. If you set encoding as UTF-32 then even you can see Chinese character, which you cannot see generally.

How to change Encoding of properties file in Eclipse: See this Eclipse Bugzilla bug for more details, which talks about several other possibilities and in the end suggest what I have highlighted below. 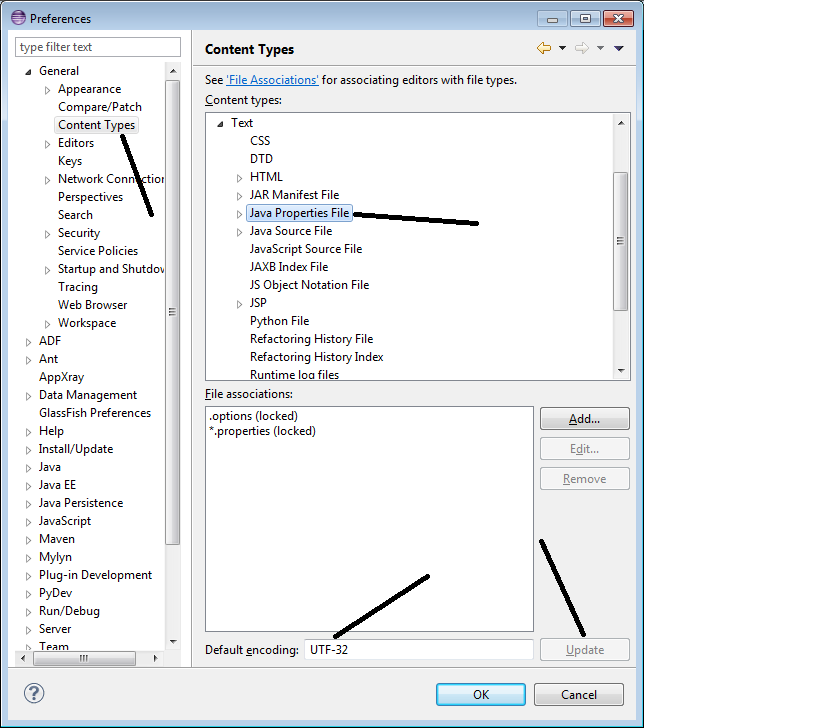 Chinese characters can be seen in Eclipse after encoding is set properly: 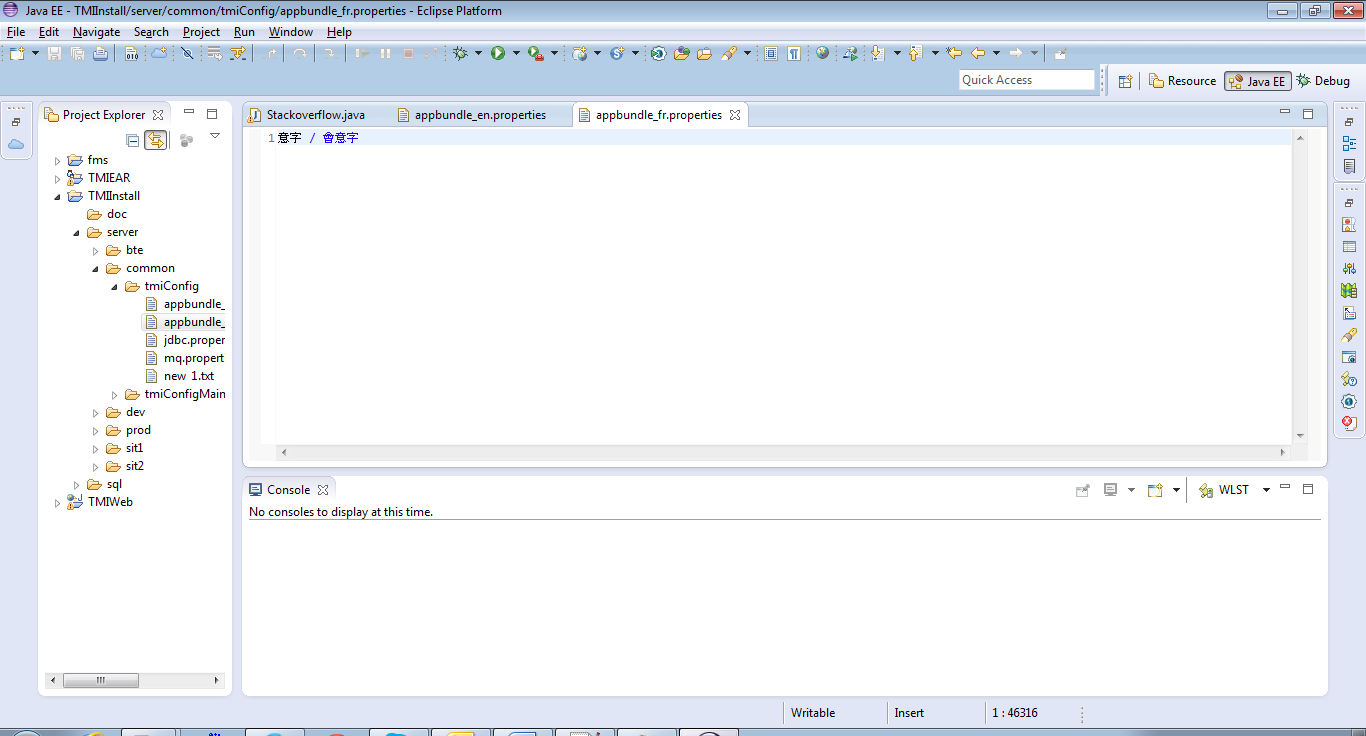 If above doesn't work consistently for you (it does work for me and I never see encoding issues) then try this using some Eclipse plugin which handles encoding of properties or other files. For example Eclipse ResourceBundle Editor or Extended Resource-Bundle editor

Another possibility to change encoding of file is using Edit --> Set Encoding option. It really matters because it changes the default character set and file encoding. Play around with by changing encoding using Edit --> Set Encoding option and do following Java sysout System.out.println("Default Charset=" + Charset.defaultCharset()); and System.out.println(System.getProperty("file.encoding")); 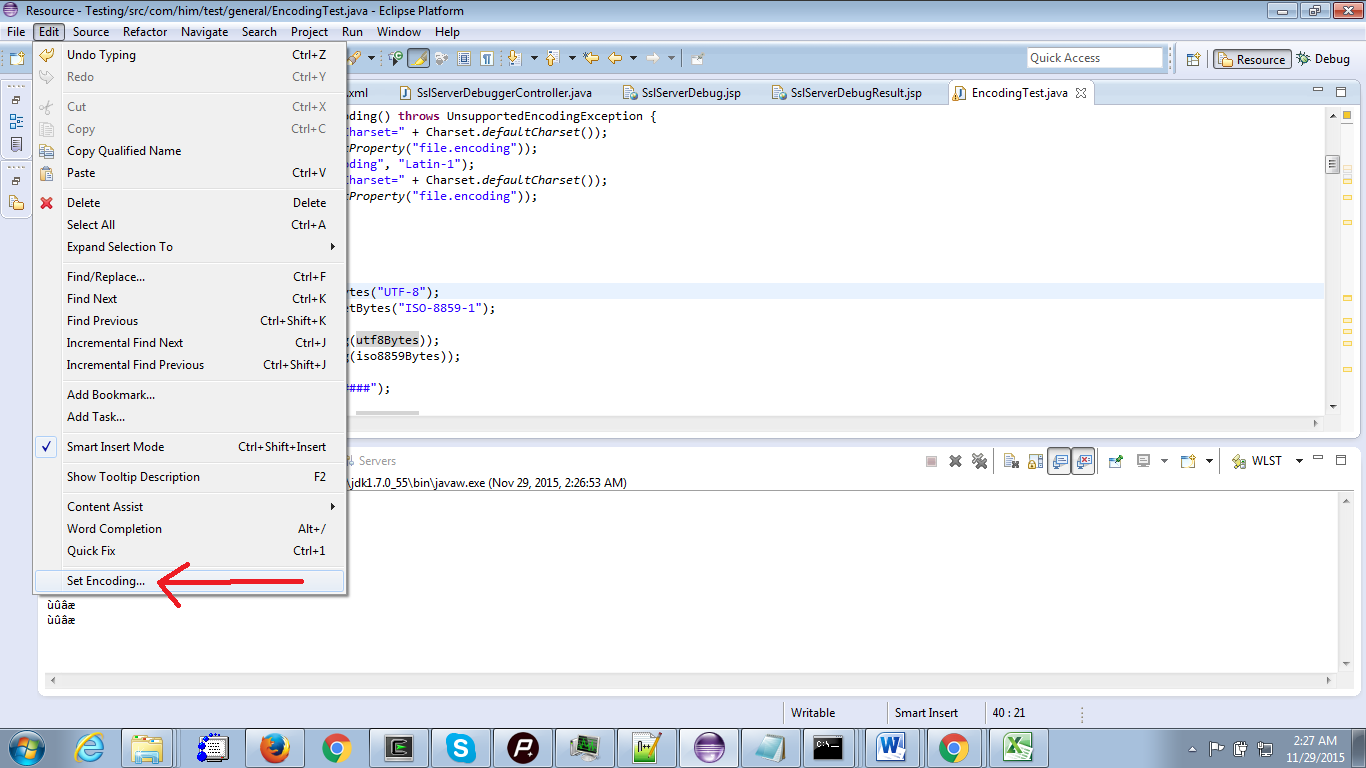 What native2ascii does: It converts all the non-ISO 8859-1 character in their equivalent \uXXXX. This is a good tool because you need not to search the \uXXXX equivalent of special character.

Every computer program whether an IDE, application server, web server, browser, etc. understands only bits, so it need to know how to interpret the bits to make expected sense out of it because depending upon encoding used, same bits can represent different characters. And that's where "Encoding" comes into picture by giving a unique identifier to represent a character so that all computer programs, diverse OS etc. knows exact right way to interpret it.

So, if you have written into a file using some encoding scheme, lets say UTF-8, and then reading using any editor but running with encoding scheme as UTF-8 then you can expect to get correct display.

Please do read my this answer to get more details but from browser-server perspective.

Add the following arguments to your eclipse.ini file.

By default Eclipse uses the encoding format picked up by the Java Virtual Machine (JVM). Also, you can set the file encoding to utf-8.

Resolved by doing the below changes : 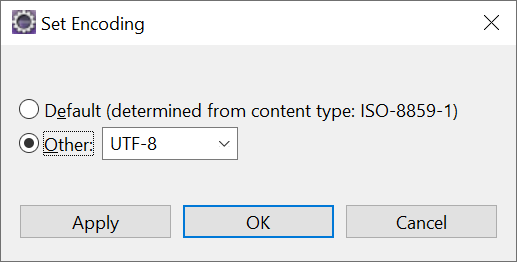 Properties Files are expected to be ISO-8859-1 (Latin-1) encoded. Most likely this what eclipse was set to by default as well.

You have to make sure that every tool which is run in the build or whatever disregards the spec and uses UTF-8 instead.

This looks like a mixture of Eclipse and git encoding or rather not-encoding.

Git uses raw bytes and doesn't care about encoding. Using git diff you might get characters like shown here. An example there is R<C3><BC>ckg<C3><A4>ngig # should be "Rückgängig".

As you can see there's two funny bracket things showing per umlaut. And in your editor, there are always two \uFFFD for each umlaut in the lines starting with +.

So I assume that your UTF-8 editor tries to interpret the git notation and fails. This in turn leads to the representation \uFFFD, which basically meands that this is character whose value is unknown or unrepresentable (see here).

Like suggested in the first link, you can try setting LESSCHARSET=UTF-8 in your environment variable (Windows). Hmm, in Linux it should be in etc/profile ?

see: a marker such as FFFD (REPLACEMENT CHARACTER) in http://unicode.org/faq/utf_bom.html

Not the answer you're looking for? Browse other questions tagged java eclipse utf-8 properties-file or ask your own question.

283
How to use UTF-8 in resource properties with ResourceBundle
64
What is the default encoding of the JVM?
13
java how to decode get url parameter received throw BeanParam
1
How can I enable UTF-8 support in Thymeleaf + Spring + Tomcat?
0
Why does it not equals String and String From List<String>

4100
What are the differences between a HashMap and a Hashtable in Java?
7314
Is Java "pass-by-reference" or "pass-by-value"?
3699
How do I efficiently iterate over each entry in a Java Map?
4267
Avoiding NullPointerException in Java
4464
How do I read / convert an InputStream into a String in Java?
3414
When to use LinkedList over ArrayList in Java?
3865
How do I generate random integers within a specific range in Java?
1962
"Debug certificate expired" error in Eclipse Android plugins
3322
How do I convert a String to an int in Java?
3535
How can I create a memory leak in Java?