Is Haskell truly pure (is any language that deals with input and output outside the system)?

After touching on Monads in respect to functional programming, does the feature actually make a language pure, or is it just another "get out of jail free card" for reasoning of computer systems in the real world, outside of blackboard maths?

This is not flame bait as someone has said in this post, but a genuine question that I am hoping that someone can shoot me down with and say, proof, it is pure.

Also I am looking at the question with respect to other not so pure Functional Languages and some OO languages that use good design and comparing the purity. So far in my very limited world of FP, I have still not groked the Monads purity, you will be pleased to know however I do like the idea of immutability which is far more important in the purity stakes.

Here's a program that prints "xy", then asks for two letters and prints them in reverse order:

You can manipulate such programs. For example:

This is has type Action -> Action - it takes a program and gives another program that asks for confirmation first. Here's another:

This has type String -> Action - it takes a string and returns a program that writes the string, like

IO in Haskell works similarily. Although executing it requires performing side effects, you can build complex programs without executing them, in a pure way. You're computing on descriptions of programs (IO actions), and not actually performing them.

In language like C you can write a function void execute(Action a) that actually executed the program. In Haskell you specify that action by writing main = a. The compiler creates a program that executes the action, but you have no other way to execute an action (aside dirty tricks).

Obviously Get and Put are not only options, you can add many other API calls to the IO data type, like operating on files or concurrency.

The previous Action type is equivalent to IO (), i.e. an IO value which always returns "unit", comparable to "void".

This type is very similar to Haskell IO, only in Haskell IO is an abstract data type (you don't have access to the definition, only to some methods).

These are IO actions which can end with some result. A value like this:

has type IO Int and is corresponding to a C program:

There's a difference between evaluating and executing. You can evaluate any Haskell expression, and get a value; for example, evaluate 2+2 :: Int into 4 :: Int. You can execute Haskell expressions only which have type IO a. This might have side-effects; executing Put 'a' (End 3) puts the letter a to screen. If you evaluate an IO value, like this:

But there are no side-effects - you only performed an evaluation, which is harmless.

How would you translate

into an IO value?

As a programmer in C, you might argue that comp('b') is a boolean. In C, evaluation and execution are identical (i.e they mean the same thing, or happens simultaneously). Not in Haskell. comp('b') evaluates into some IO action, which after being executed gives a boolean. (Precisely, it evaluates into code block as above, only with 'b' substituted for x.)

It also makes sense mathematically. In C, int f() is a function. For a mathematician, this doesn't make sense - a function with no arguments? The point of functions is to take arguments. A function int f() should be equivalent to int f. It isn't, because functions in C blend mathematical functions and IO actions.

An IO value, which reads a character x and ends, returning an IO value which writes x to screen.

Haskell has special functions which allow easy manipulation of IO values. For example:

which takes a list of IO actions, and returns an IO action which executes them in sequence.

Monads are some combinators (like conditionally above), which allow you to write programs more structurally. There's a function that composes of type

which given IO a, and a function a -> IO b, returns a value of type IO b. If you write first argument as a C function a f() and second argument as b g(a x) it returns a program for g(f(x)). Given above definition of Action / IO, you can write that function yourself.

Notice monads are not essential to purity - you can always write programs as I did above.

The essential thing about purity is referential transparency, and distinguishing between evaluation and execution.

Thanks to purity, a compiler has much more freedom and can optimize better. It can rearrange computations, while in C it has to think if that changes meaning of the program.

It is important to understand that there is nothing inherently special about monads – so they definitely don’t represent a “get out of jail” card in this regard. There is no compiler (or other) magic necessary to implement or use monads, they are defined in the purely functional environment of Haskell. In particular, sdcvvc has shown how to define monads in purely functional manner, without any recourses to implementation backdoors.

What does it mean to reason about computer systems "outside of blackboard maths"? What kind of reasoning would that be? Dead reckoning?

Side-effects and pure functions are a matter of point of view. If we view a nominally side-effecting function as a function taking us from one state of the world to another, it's pure again.

We can make every side-effecting function pure by giving it a second argument, a world, and requiring that it pass us a new world when it is done. I don't know C++ at all anymore but say read has a signature like this:

In our new "pure style", we handle it like this:

This is in fact how every Haskell IO action works.

So now we've got a pure model of IO. Thank goodness. If we couldn't do that then maybe Lambda Calculus and Turing Machines are not equivalent formalisms and then we'd have some explaining to do. We're not quite done but the two problems left to us are easy:

The first problem is easy enough. As long as we do not allow inspection of the world, it turns out we needn't trouble ourselves about storing anything in it. We just need to ensure that a new world is not equal to any previous world (lest the compiler deviously optimize some world-producing operations away, like it sometimes does in C++). There are many ways to handle this.

As for the worlds getting mixed up, we'd like to hide the world passing inside a library so that there's no way to get at the worlds and thus no way to mix them up. Turns out, monads are a great way to hide a "side-channel" in a computation. Enter the IO monad.

Some time ago, a question like yours was asked on the Haskell mailing list and there I went in to the "side-channel" in more detail. Here's the Reddit thread (which links to my original email):

I'm very new to functional programming, but here's how I understand it:

In haskell, you define a bunch of functions. These functions don't get executed. They might get evaluated.

There's one function in particular that gets evaluated. This is a constant function that produces a set of "actions." The actions include the evaluation of functions and performing of IO and other "real-world" stuff. You can have functions that create and pass around these actions and they will never be executed unless a function is evaluated with unsafePerformIO or they are returned by the main function.

There's a lot more to this question and a lot of it is a question of semantics (human, not programming language). Monads are also a bit more abstract than what I've described here. But I think this is a useful way of thinking about it in general.

I think of it like this: Programs have to do something with the outside world to be useful. What's happening (or should be happening) when you write code (in any language) is that you strive to write as much pure, side-effect-free code as possible and corral the IO into specific places.

What we have in Haskell is that you're pushed more in this direction of writing to tightly control effects. In the core and in many libraries there is an enormous amount of pure code as well. Haskell is really all about this. Monads in Haskell are useful for a lot of things. And one thing they've been used for is containment around code that deals with impurity.

This way of designing together with a language that greatly facilitates it has an overall effect of helping us to produce more reliable work, requiring less unit testing to be clear on how it behaves, and allowing more re-use through composition.

If I understand what you're saying correctly, I don't see this as a something fake or only in our minds, like a "get out of jail free card." The benefits here are very real.

For an expanded version of sdcwc's sort of construction of IO, one can look at the IOSpec package on Hackage: http://hackage.haskell.org/package/IOSpec

The Haskell language was pure; the last version being Haskell 1.2. Back then, the type of main was:

which was usually abbreviated to:

and Response along with Request were humble, albeit large datatypes: 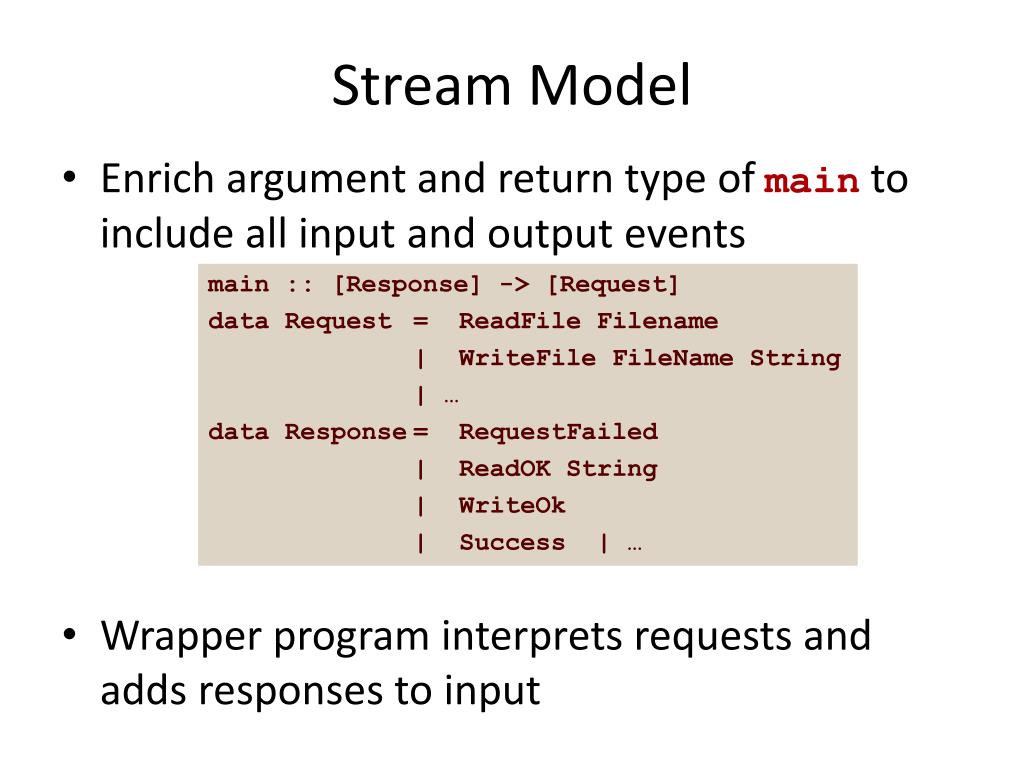 The advent of I/O using the monadic interface in Haskell changed all that - no more visible datatypes, just an abstract specification. As a result, how IO, return, (>>=) etc are defined is now specific to each implementation of Haskell.

So the question is now:

As Owen Stephens notes in Approaches to Functional I/O:

I/O is not a particularly active area of research, but new approaches are still being discovered [...]

The Haskell language may once again have a pure, fully-defined model for I/O which doesn't attract so much notoriety...

No, it isn't. IO monad is impure because it has side effects and mutable state (the race conditions are possible in Haskell programs so ? eh ... pure FP language don't know something like "race condition"). Really pure FP is Clean with uniqueness typing, or Elm with FRP (functional reactive programing) not Haskell. Haskell is one big lie.

Not the answer you're looking for? Browse other questions tagged haskell functional-programming monads referential-transparency or ask your own question.

46
Is Haskell really a purely functional language considering unsafePerformIO?
52
In what sense is the IO Monad pure?
25
What is the difference between functions in math and functions in programming?
15
I/O in Haskell is Functional?
7
Lazy evaluation and IO side effect confusion
6
Unwrapping a monad
7
Is this a reasonable view of Haskell IO?
4
Monads in Haskell and Purity

13
How Functional language are different from the language implementation point of view
75
Can Haskell functions be proved/model-checked/verified with correctness properties?
8
A Functional-Imperative Hybrid
13
What is the difference between pure and impure in haskell?
4
Monads in Haskell and Purity
0
In functional languages, how is the concept of immutability applied to addresses in memory?
0
How to quickly read the do notation without translating to >>= compositions?