Any way (or shortcut) to auto import the classes in IntelliJ IDEA like in Eclipse?

In Eclipse, while coding in Java and press Ctrl + Shift + O auto import all the Classes automatically.
In NetBeans, this is done with Ctrl + Shift + I.

Is any way to do this in IntelliJ IDEA?

I searched an equivalent shortcut in google, StackOverflow, IntelliJ IDEA configuration and in the official IntelliJ website Keyboard Shortcuts You Cannot Miss

IntelliJ IDEA does not have an action to add imports. Rather it has the ability to do such as you type. If you enable the "Add unambiguous imports on the fly" in Settings > Editor > General > Auto Import, IntelliJ IDEA will add them as you type without the need for any shortcuts. You can also add classes and packages to exclude from auto importing to make a class you use heavily, that clashes with other classes of the same name, unambiguous.

For classes that are ambiguous (or is you prefer to have the "Add unambiguous imports on the fly" option turned off), just type the name of the class (just the name is OK, no need to fully qualify). Use code completion and select the particular class you want:

Notice the fully qualified names to the right. When I select the one I want and hit enter, IDEA will automatically add the import statement. This works the same if I was typing the name of a constructor. For static methods, you can even just keep typing the method you want. In the following screenshot, no "StringUtils" class is imported yet.

Alternatively, type the class name and then hit Alt+Enter or ⌥+Enter to "Show intention actions and quick-fixes" and then select the import option.

Although I've never used it, I think the Eclipse Code Formatter third party plug-in will do what you want. It lists "emulates Eclipse's imports optimizing" as a feature. See its instructions for more information. But in the end, I suspect you'll find the built in IDEA features work fine once you get use to their paradigm. In general, IDEA uses a "develop by intentions" concept. So rather than interrupting my development work to add an import statement, I just type the class I want (my intention) and IDEA automatically adds the import statement for the class for me.

Not all at once. But you can press

People assume it only works when you are at the particular item. But it actually works for "next missing type". So if you keep pressing Alt + Enter, IDEA fixes one after another until all are fixed.

Seems like IntelliJ IDEA will import missed class automatically, and you can import them by hit Alt + Enter manually.

I think the best solution, though not exactly the same as Eclipse/Netbeans, is to change the 'Optimize Imports' settings.

Edit: Using this method, when there are ambiguous imports, IntelliJ will let you know, and you can then use Alt + Enter method outlined in the answer by Wuaner

I find that, almost always, the most appropriate Import is at the top of the list.

Can't import all at once but can use following combination:

Here are the steps:

1- With IDEA open, press Control + `. Following options will be popped up.

2- Select Keymap. You will see another pop-up. Select Eclipse there. 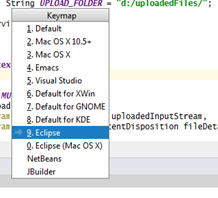 Not the answer you're looking for? Browse other questions tagged java eclipse intellij-idea keyboard-shortcuts hotkeys or ask your own question.

0
How to automatically import classes when saving in Intelij?
36
IntelliJ Idea 12: How do I auto import namespaces?
8
Default imports from sun instead of java package in intelliJ
3
Howto get IntelliJ to auto-import when using javadoc {@link}?
2
Adding imports to multiple classes in project to fix errors