What are Docker image "layers"?

I am brand new to Docker and am trying to understand exactly what a Docker image is. Every single definition of a Docker image uses the term "layer", but does not seem to define what is meant by layer.

From the official Docker docs:

We’ve already seen that Docker images are read-only templates from which Docker containers are launched. Each image consists of a series of layers. Docker makes use of union file systems to combine these layers into a single image. Union file systems allow files and directories of separate file systems, known as branches, to be transparently overlaid, forming a single coherent file system.

So I ask, what is a layer (exactly); can someone give a few concrete examples of them? And how do these layers "snap together" to form an image?

I might be late, but here's my 10 cents (complementing ashishjain's answer):

Basically, a layer, or image layer is a change on an image, or an intermediate image. Every command you specify (FROM, RUN, COPY, etc.) in your Dockerfile causes the previous image to change, thus creating a new layer. You can think of it as staging changes when you're using git: You add a file's change, then another one, then another one...

First, we choose a starting image: rails:onbuild, which in turn has many layers. We add another layer on top of our starting image, setting the environment variable RAILS_ENV with the ENV command. Then, we tell docker to run bundle exec puma (which boots up the rails server). That's another layer.

The concept of layers comes in handy at the time of building images. Because layers are intermediate images, if you make a change to your Dockerfile, docker will build only the layer that was changed and the ones after that. This is called layer caching.

A docker container image is created using a dockerfile. Every line in a dockerfile will create a layer. Consider the following dummy example:

They make the most sense to me with an example...

Examining layers of your own build with docker diff

Each of those dd commands outputs a 1M file to the disk. Lets build the image with an extra flag to save the temporary containers:

In the output, you'll see each of the running commands happen in a temporary container that we now keep instead of automatically deleting:

Each line prefixed with an A is adding the file, the C indicates a change to an existing file, and the D indicates a delete.

Each of these container filesystem diffs above goes into one "layer" that gets assembled when you run the image as a container. The entire file is in each layer when there's an add or change, so each of those chmod commands, despite just changing a permission bit, results in the entire file being copied into the next layer. The deleted /data/one file is still in the previous layers, 3 times in fact, and will be copied over the network and stored on disk when you pull the image.

You can see the commands that goes into creating the layers of an existing image with the docker history command. You can also run a docker image inspect on an image and see the list of layers under the RootFS section.

Here's the history for the above image:

The newest layers are listed on top. Of note, there are two layers at the bottom that are fairly old. They come from the busybox image itself. When you build one image, you inherit all the layers of the image you specify in the FROM line. There are also layers being added for changes to the image meta-data, like the CMD line. They barely take up any space and are more for record keeping of what settings apply to the image you are running.

The layers have a couple advantages. First, they are immutable. Once created, that layer identified by a sha256 hash will never change. That immutability allows images to safely build and fork off of each other. If two dockerfiles have the same initial set of lines, and are built on the same server, they will share the same set of initial layers, saving disk space. That also means if you rebuild an image, with just the last few lines of the Dockerfile experiencing changes, only those layers need to be rebuilt and the rest can be reused from the layer cache. This can make a rebuild of docker images very fast.

Inside a container, you see the image filesystem, but that filesystem is not copied. On top of those image layers, the container mounts it's own read-write filesystem layer. Every read of a file goes down through the layers until it hits a layer that has marked the file for deletion, has a copy of the file in that layer, or the read runs out of layers to search through. Every write makes a modification in the container specific read-write layer.

One downside of the layers is building images that duplicate files or ship files that are deleted in a later layer. The solution is often to merge multiple commands into a single RUN command. Particularly when you are modifying existing files or deleting files, you want those steps to run in the same command where they were first created. A rewrite of the above Dockerfile would look like:

And if you compare the resulting images:

Just by merging together some lines in the contrived example, we got the same resulting content in our image, and shrunk our image from 5MB to just the 1MB file that you see in the final image.

Since Docker v1.10, with introduction of the content addressable storage, the notion of 'layer' became quite different. Layers have no notion of an image or belonging to an image, they become merely collections of files and directories that can be shared across images. Layers and images became separated.

For example, on a locally built image from a base image, let's say, ubuntu:14.04, the docker history command yields the image chain, but some of the image IDs will be shown as 'missing' because the build history is no longer loaded. And the layers that compose these images can be found via

The layer content is stored at /var/lib/docker/aufs/diff if the storage driver selection is aufs. But the layers are named with a randomly generated cache ID, it seems the link between a layer and its cache ID is only known to Docker Engine for security reasons. I am still looking for a way to find out

This blog provided much insight.

Per Docker's image spec via The Moby Project:

Images are composed of layers. Each layer is a set of filesystem changes. Layers do not have configuration metadata such as environment variables or default arguments - these are properties of the image as a whole rather than any particular layer.

So, essentially, a layer is just a set of changes made to the filesystem. 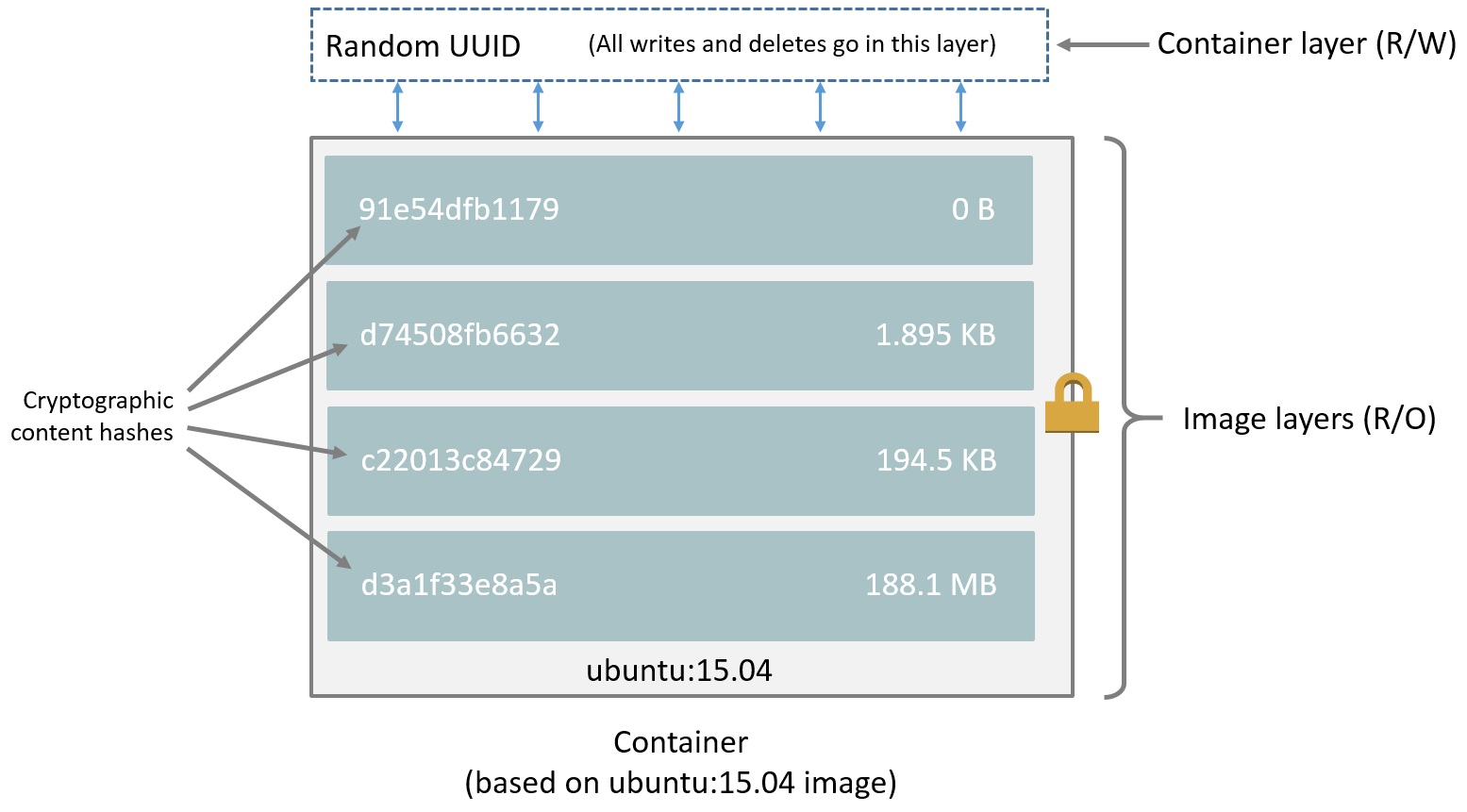 An image consists of many layers which usually are generated from Dockerfile, each line in Dockerfile will create a new layer, and the result is an image, which is denoted by the form repo:tag, like ubuntu:15.04.

For more information, please consider reading the official docs above.

Given these two Dockerfiles

one would expect the same set of layers if they just were about changes to the filesystem, but this is not the case:

You can see how, even if the changes to the filesystem are the same in both cases, the order matters.

Thank you @David Castillo for the useful information. I think the layer is some binary change or instruction of a image that can be done or undone easily. They are done step by step that is same as a layer on a layer, so we called "layer".

For more information you can see the "docker history" like this:

My personal understanding is that we can compare docker layer to github commit. For your base image(your fresh master repo), you make several commits, every commit is changing your master status, it's the same in docker, every layer is doing some operation based on previous intermediate layer. And then, this layer become a new intermediate layer to the next layer.

The thing I can add to this questison thread, is that you can use git as a metahpor to understand the concept of layers, images and containers.

Here is how it goes:

157
ARG or ENV, which one to use in this case?
6
How to link docker images to their composing layers on the disk?
5
What causes a cache invalidation when building a Dockerfile?
3
ENV, RUN produce layers, images or containers? (understanding docs question)
0
Do intermediate Docker images occupy disk space?
0
What are the values listed under "Layers" in Docker Image Inspect?
1
Docker: start tmux session inside of dockerfile?
0
bash TAB completion does not work on centos 8
1
How do I make sense of the output given by a Docker build process?
0
Dockerizing a meteor app
See more linked questions