Are all these Cocoapod files supposed to be red after installing?

I just started a new project from scratch and tried to install Parse with Cocoapods for the first time. I'm using Xcode 6.4 and Cocoapods 0.37.2.

I did the standard Cocoapods install with Terminal:

And then again in Terminal:

I closed xcodeproj and opened xcworkspace version of app, and then I run into this:

Basically a bunch of red (not found? not linked correctly?) Cocoapod files. I tried to save something on Parse, and it does work. But then I tried to subclass PFQueryTableViewController and it couldn't find it. I'm not exactly sure where I went wrong, did I skip a step in installing Cocoapods? I'm quite new to programming in general, so if someone could shed a light on what I'm doing wrong it would be awesome if it comes with steps :)

red items in Frameworks and Products, pointing to derived data are normal. 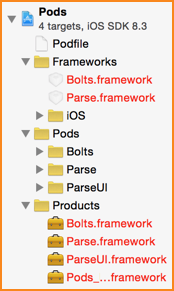 Have you tried the obvious:

Assuming you got this after the pod install:

...and you followed Cocoapod's advice (generally better to have closed Xcode Project before creating the workspace)...

[!] From now on use VeilApp.xcworkspace.

Not the answer you're looking for? Browse other questions tagged ios swift parse-platform cocoapods or ask your own question.