I'm studying a little of C++ and I'm fighting with pointers. I understand that I can have 3 level of pointers by declaring:

You can see that

Here is the memory layout of your pointer:

I believe, it should be obvious now, why they are all different.

The above is close enough for basic understanding, which is why I wrote it the way I wrote it. However, as haccks rightly points out, the first line is not 100% precise. So here come all the fine details:

From the definition of the C language, the value of x[0] is the whole array of integer pointers. However, arrays are something you can't really do anything with in C. You always manipulate either their address or their elements, never the entire array as a whole:

Due to the array-pointer decay in case 3., all uses of x[0] ultimately result in a pointer that points the beginning of the pointer array; the call printf("%p", x[0]) will print the contents of the memory cells labeled as "address of array".

By the way, if you ever feel confused by what these kind of declarations mean, use cdecl.

As x is defined the following way

Expression x[0][0] is equivalent to y[0] and has type int *. Let denote it like z that is we have a declaration

First thing I have to say that

From the following picture all things are clear. 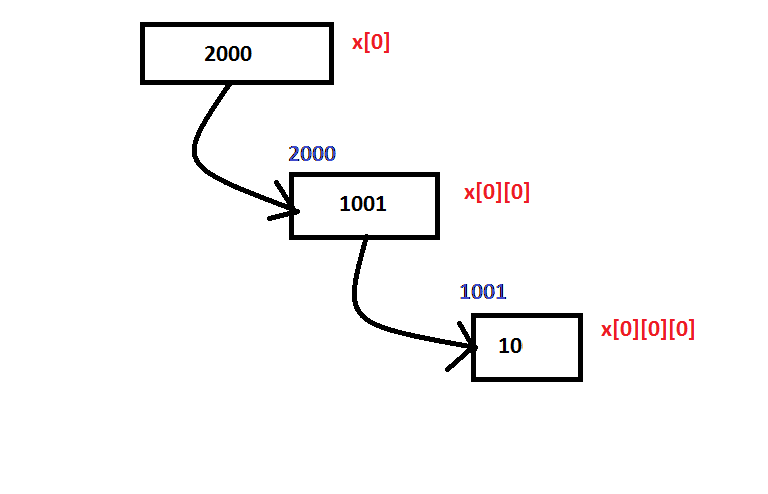 If you were to view the arrays from a real-world perspective, it would appear as thus:

There's a principle in C++ so that: a declaration of a variable indicates exactly the way of using the variable. Consider your declaration:

that can be rewritten as (for clearer):

Due to the principle, we have:

So you can figure out the difference.

You are trying to compare different types by value

Keep in mind that your declaration makes a difference

does not occupy contiguous space.

Look that, the &* can be refactored, just removing it:

The other answers are correct, but none of them emphasize the idea that it is possible for all three to contain the same value, and so they're in some way incomplete.

The reason this can't be understood from the other answers is that all the illustrations, while helpful and definitely reasonable under most circumstances, fail to cover the situation where the pointer x points to itself.

This is pretty easy to construct, but clearly a bit harder to understand. In the program below, we'll see how we can force all three values to be identical.

NOTE: The behavior in this program is undefined, but I'm posting it here purely as an interesting demonstration of something that pointers can do, but shouldn't.

This compiles without warnings in both C89 and C99, and the output is the following:

Interestingly enough, all three values are identical. But this shouldn't be a surprise! First, let's break down the program.

We declare x as a pointer to an array of 5 elements where each element is of type pointer to int. This declaration allocates 4 bytes on the runtime stack (or more depending on your implementation; on my machine pointers are 4 bytes), so x is referring to an actual memory location. In the C family of languages, the contents of x are just garbage, something left over from previous usage of the location, so x itself doesn't point anywhere—certainly not to allocated space.

So, naturally, we can take the address of the variable x and put it somewhere, so that's exactly what we do. But we'll go ahead and put it into x itself. Since &x has a different type than x, we need to do a cast so we don't get warnings.

So the 4-byte block of memory at the address 0xbfd9198c contains the bit pattern corresponding to the hexadecimal value 0xbfd9198c. Simple enough.

Next, we print out the three values. The other answers explain what each expression refers to, so the relationship should be clear now.

We can see that the values are the same, but only in a very low level sense...their bit patterns are identical, but the type data associated with each expression means their interpreted values are different. For instance, if we printed out x[0][0][0] using the format string %d, we'd get a huge negative number, so the "values" are, in practice, different, but the bit pattern is the same.

This is actually really simple...in the diagrams, the arrows just point to the same memory address rather than to different ones. However, while we were able to force an expected result out of undefined behavior, it is just that—undefined. This isn't production code but simply a demonstration for the sake of completeness.

In a reasonable situation, you will use malloc to create the array of 5 int pointers, and again to create the ints that are pointed to in that array. malloc always returns a unique address (unless you're out of memory, in which case it returns NULL or 0), so you'll never have to worry about self-referential pointers like this.

As for array decay:

In the last example, it is semantically much clearer to use *(*x)[0][0][0] rather than x[0][0][0][0][0], this is because the first and last [0] here are interpreted as a pointer dereference rather than an index into a multidimensional array, because of the type. They are however identical because (*x) == x[0] regardless of the semantics. You could also use *****x, which would look like you're dereferencing the pointer 5 times, but it is actually interpreted exactly the same: an offset, a dereference, a dereference, 2 offsets into an array and a dereference, purely because of the type you are applying the operation to.

If you [0] or ** a 2d array type then it's an offset only i.e. an offset and then an idempotent dereference.

Not the answer you're looking for? Browse other questions tagged c++ arrays pointers or ask your own question.

4235
The Definitive C++ Book Guide and List
1394
Deleting array elements in JavaScript - delete vs splice
1241
Where and why do I have to put the "template" and "typename" keywords?
3406
Sort array of objects by string property value
2097
Get all unique values in a JavaScript array (remove duplicates)
2296
What are the basic rules and idioms for operator overloading?
9921
How can I remove a specific item from an array?
2059
C++11 introduced a standardized memory model. What does it mean? And how is it going to affect C++ programming?
25917
Why is processing a sorted array faster than processing an unsorted array?
1753
Why should I use a pointer rather than the object itself?