I have a view with a UITextField which should hide the keyboard when return is pressed.

My function is this:

Normally the keyboard should be hidden but it stays on the screen. resignFirstResponder is correctly called. What am I missing?

I see you have the iPad tag on this. Do you happen to be presenting a modal view using UIModalPresentationFormSheet? If so, it looks like this is a limitation of the FormSheet modal presentation (either Apple is doing it intentionally for some reason, or it is a bug). See these other questions for more details:

Modal Dialog Does Not Dismiss Keyboard

There is this helpful method which allows you to dismiss the keyboard when presenting the Modal Dialog:

This will override the default behavior of the modal dialog set by Apple and allow you dismiss the keyboard. It is in the UIViewController Class.

If you are using the Interface Builder, look if your UITextField has the delegated linked with your class.

-Select your UITextField and in your Connections look if exits one connection in Outlets->delegate. If not, conect with you File's Owner Class.

This need to be linked with your File's Owner Class. This delegate tell where to search for a method. If your are overriding a method, you need to tell where the object will search for that.

This solution worked for me after none of the above did. after calling resignFirstResponder i added a modal view & removed it.

To deal with the bug mentioned by Brandon, you can try closing and re-opening your modal view controller as long as you still have a reference to it.

Simply click control then on the textfield drag and release on the .h file

then in the pop up menu select

Did you remember to implement the UITextFieldDelegate protocol?

I have read so many articles about this issue, where the onscreen keyboard refuses to hide when you call resignFirstResponder, but none of the suggestions worked for me.

I'm using XCode 5 (iOS 7) and have a iPhone screen containing a couple of controls which require the onscreen keyboard, but if the user clicks on the UIButton, then I want the keyboard to disappear. 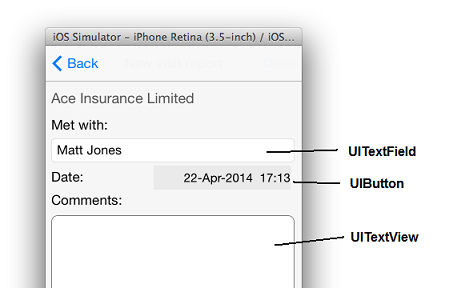 I probably wasted one full day experimenting with resignFirstResponder and adding disablesAutomaticKeyboardDismissal functions to return NO, but nothing worked. Once the onscreen keyboard appeared, I could never get it to disappear again.

Now, when the user clicks on my UIButton, I simply disable the UITextField and UITextView controls.

And suddenly, the app finds it has no editable text fields needing an onscreen keyboard, and it neatly slides the keyboard out of sight.

My UIButton actually makes a popup dialog appear. When the user dismisses the popup, I re-enable these two controls, so if the user taps in one of them, the keyboard will appear again.

And surprisingly, this workaround even works on UIViewControllers which appear in Modal style.

I hope this helps other XCode victims out there.

Based on your comment that it looks like focus has shifted, then I think what may be happening is that the keyboard is staying open for the next text input field. If your return key is a "Next" key, then returning YES for textFieldShouldReturn: will make the next textField the first responder, and keep the keyboard visible.

The easiest way is:

That's it. It worked for me.

if you are in UIModalPresentationFormSheet just call

23
iPad "dismiss keyboard" button (lower right), how do I detect when this occurs? What function tells me it was pressed?
1
Handling resignFirstResponder with Numpad
0
backgroundTouched not working in uitableviewcontroller iphone
794
Xcode 6: Keyboard does not show up in simulator
0
Hiding the Keyboard triggered by textField via resignFirstResponder
3292
Git is not working after macOS Update (xcrun: error: invalid active developer path (/Library/Developer/CommandLineTools)
0
Don't dismiss keyboard on UITextField return