Sorting a set of objects by a user's preference

Given a set of n objects in no specific order (n = 5 in this example):

I'm trying to give a user several questions with three options, like so:

after every question, it would make a new question with different options (no preference stays the same), efficiently collecting data on the user's preferences.

It would, after several (6 or 7 in this case) questions, give an ordered list (array) of the highest ranked objects in order:

However, I don't know how such an algorithm would work or when it would know to stop. I'm sorry if this is a bad question, but I'm pretty new to algorithm design.

And I suppose it doesn't really matter, but I'm using JavaScript.

Okay, I'm revisiting this four months later, because I thought of a new method to do the sorting.

Perhaps, it would be more efficient to have a list of inferiors for each object, so that anything which is inferior to one object would be inferior for its superiors. I'm explaining this awfully, so here's a visual:

With the old method, with score:

The new method would make cherry vs. banana redundant because we already know that apple > banana and cherry > apple. I really only need to figure out how to code it.

The only problem arises with human circular logic (i.e. a > b > c > a), where this is a possibility, but thankfully this won't be a problem with my particular set.

I looked into this some time ago as part of my answer to a related question (Collaborative sorting algorithm based on 1 vs 1 choice) and found that creating an ordered list based on "do you prefer A or B?" style questions, using as few questions as possible, and while avoiding cycles (as in: A>B, B>C, C>A), is best done using binary insertion sort, or a variation thereof.

What this means in practise, is that you introduce the elements into the ordered list one by one, find their place in the list, insert them, and then move on to the next element.
To reduce the number of comparisons to the strictest minimum, you use binary insertion; this means that every new element is first compared to the element in the middle of the ordered list; this tells you whether the new element goes in the upper or lower half; then you compare it to the element in the middle of that half, and so on, until its place is found.

As an example, consider a list of 10 elements that need to be sorted. If you compared every element with every other element, you'd have to ask 45 questions. With binary insertion, this is reduced to 19 ~ 25 questions, with an average of 22.2 questions. 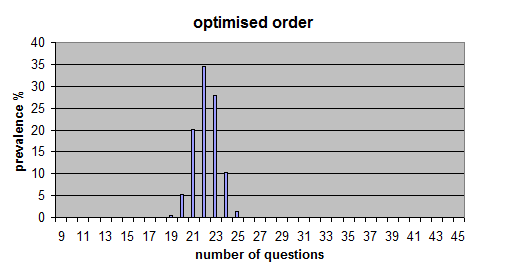 Below is a Javascript code snippet I wrote for the related question. It asks "A or B?" questions, takes "A", "B" or "no preference" as answers, and creates an ordered list. A random generator acts as the person giving the answers.

You can use sort:

The first two if statements are used to determine the winner.

Edit: Here is the new Fiddle which adds the possibility to answer with "indifferent".

One more thing you need to consider: When dealing with preferences in theory, there are three axioms Some explanation:

These axioms have to apply, so that you can calculate with utility functions.

But in practice especially the third one doesn't apply. You will always find people who say: Oranges > apples, apples > bananas BUT ALSO bananas > oranges

In my fiddle I ignored those axioms and let the user decide wether they want to act completely logical or not.

You don't need to compare every item against every other item. That would require you to ask the user 15 questions to sort 5 items. It's been proven that you can get a total ordering of 5 items in 7 comparisons.

You can accomplish this with a sorting network. For any N, you can create a series of comparisons and swaps that will sort the items. There are known optimum sequences for sorting up to 16 items. Beyond that there are algorithms that will generate sorting networks (see Constructing sorting networks in the linked article). Although those networks are not proven to be optimum, they're probably more efficient than a general-purpose sorting algorithm.

Your larger problem, which I think you gloss over too easily, is the very real possibility of circular logic. Transitivity typically doesn't hold when it comes to user preferences.

Well you could add weight to each item based on the users answers. So for instance in your example of

Use a map (javascript object can act so) with object as the key and integer (set to 0 initially for all objects) as the value.

For each question, you increment the value of the respective chosen key. Since no preference affects none of them, nothing to be done in case it's chosen.

Then iterate the map, finding the key-value pair with highest value. Return the key.

The comparison-based search algorithms are designed to optimize number of comparisons and this translates to optimization of the number of questions asked to the user in this case.

Note that javascript has no native "contains" function for arrays. You can use $.inArray from jQuery or _.contains from underscore, or write one yourself.

Try creating an array of items having selection names , using input type="radio" elements , removing elements as selected , pushing values to one of three properties of an object. Property 1 of object would contain one item , property 2 would contain input array length / 3 items , property 3 would contain remainder of selections; "none" would be provided when one selection option remains in form.

Not the answer you're looking for? Browse other questions tagged javascript algorithm sorting or ask your own question.

2907
Detecting an undefined object property
5178
What is the most efficient way to deep clone an object in JavaScript?
6314
How do I remove a property from a JavaScript object?
2141
What is the preferred syntax for defining enums in JavaScript?
4204
Setting “checked” for a checkbox with jQuery
3419
How do I sort a dictionary by value?
3332
How do I test for an empty JavaScript object?
1383
Sorting an array of objects by property values
2923
Sort array of objects by string property value
1696
Image Processing: Algorithm Improvement for 'Coca-Cola Can' Recognition