What is the relationship between unboxed types and strictness?

Unboxed types, like Int#, and strict functions, like f (!x) = ..., are something different, but I see conceptual similarity - they disallow thunks/laziness in some way. If Haskell was a strict language like Ocaml, every function would be strict and every type unboxed. What is the relationship between unboxed types and enforcing strictness?

To support parametric polymorphism and laziness, by default Haskell data types are represented uniformly as a pointer to a closure on the heap, with a structure like this: 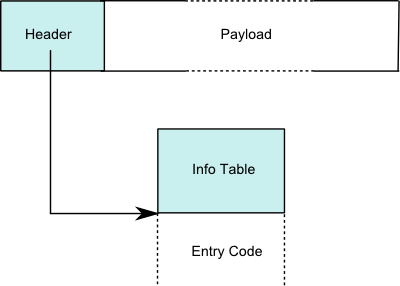 These are "boxed" values. An unboxed object is represented by the value itself directly, without any indirection or closure. Int is boxed, but Int# is unboxed.

Lazy values require a boxed representation. Strict values do not: they can represented either as fully evaluated closures on the heap, or as primitive unboxed structures. Note that pointer tagging is an optimization that we can use on boxed objects, to encode the constructor in the pointer to the closure.

The Relationship to Strictness

Because they are unlifted they are necessarily strict. The representation of laziness is not possible.

So particular unboxed types, like Int#, Double#, really are represented just as double or int on the machine (in C notation).

Separately, GHC does strictness analysis of regular Haskell types. If a value's use is found to be strict – i.e. it can never be 'undefined' – the optimizer might replace all uses of the regular type (e.g. Int) with an unboxed one (Int#), since it knows that the use of Int is always strict, and thus replacement with the more efficient (and always strict) type Int# is safe.

We can of course have strict types without unboxed types, for example, an element-strict polymorphic list:

is strict in its elements, but does not represent them as unboxed values.

This also points out the mistake you made about strict languages, like OCaml. They still need to support polymorphism, so either they provide a uniform representation, or they specialize data types and functions to every type. GHC by default uses uniform representation, as does OCaml, though GHC can also specialize types and functions now (like C++ templates).

has two strict fields, but the first one is unboxed.

Ultimately, the reason unboxed types are (necessarily) strict is there is no place to store the thunk as they are just flat, dumb data at that point.

Arguments of any types can be made "strict", but the only unboxed types that have corresponding boxed types are Char#, Int#, Word#, Double# and Float#.

If you know low-level languages like C, it's easier to explain. Unboxed types are like int, double, etc., and the boxed types are like int*, double*, etc. When you've got an int, you already know the whole value as it's represented in the bit pattern, therefore, it is not lazy. It must be strict too, as all values of int are valid and not ⊥.

However, given an int* you may choose to dereference the pointer later to get the actual value (thus lazy), and it is possible to have invalid pointers (it contains ⊥, i.e. non-strict).

Not the answer you're looking for? Browse other questions tagged haskell lazy-evaluation evaluation strictness or ask your own question.

46
How do you write data structures that are as efficient as possible in GHC?
8
How is a partial application represented at runtime?
3
Isn't this a double traversal?

773
What is the difference between . (dot) and $ (dollar sign)?
313
What is Weak Head Normal Form?
69
How does non-strict and lazy differ?
92
What are Haskell's strictness points?
130
What are some compelling use cases for dependent method types?
5
Type enforced "strict/imperitive" subset/version of Haskell
393
Transitivity of Auto-Specialization in GHC
319
Why is Haskell (GHC) so darn fast?
45
What is the connection between laziness and purity?